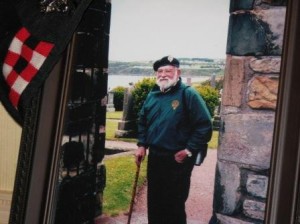 We went to Buzz Fleming’s memorial service last Saturday.  Of course his name isn’t Buzz.  It’s Basil Aubrey Fleming. Buzz was born in Palmrya, New York, on Halloween in 1924.  He joked about Palmrya, which was the home of the American Spiritualism movement.  He loved New York state, loved the woods, loved hiking, fishing, camping and the Boy Scouts.  We met him through Boy Scouts, when he and his wife Sharon came to Camp Masonite Navarro as camp director and cook.  Their son Matt was a shy 13 year old.  Now Matt is a school administrator, a chaplain and has three kids of his own.

One thing memorial services do for you is help you remember the whole person, just as they remind you that the person has gone away. For about the past ten years, Buzz’s health wasn’t great.  The Sig-O and I would compare notes after every visit:  “How did Buzz seem to you?”  “He seemed weak.”  “He seemed stronger this visit.”  “He seemed vague.”  “He seemed like his old self, but not as strong.”

Saturday, watching the slide show about his life, I started remembering the Buzz from the old days.

Patrick, Buzz’s oldest child from his first marriage, said, “From the time I was fifteen, you couldn’t lose me in the woods.  I thank my father for that.” Buzz loved nature, and he loved science.  In the late 80s-early 90s, when Buzz taught and Sharon was principal of a Christian school in Calaveras County, Buzz always had a row of strange-looking rocks on the window ledge in his classroom—ammonites and other fossils.  Subversive!  One October weekend during this time, Buzz and Sharon were visiting at our house.  Buzz and I were in the kitchen talking.  The phone rang.  It was people from the school, calling to ask Sharon, who was in the shower, a question.  I listened to Buzz’s end of the conversation, which seemed to be about paper streamers, pumpkins, and bowls of candy. After he hung up he stood for a moment shaking his head slightly.  He looked at me and said, “Every August when we go to Board to get our curriculum approved, I have to fight to teach evolution as a theory.  And every October I help them plan the Halloween party.  And no one sees anything odd there.”  Another time, after he had left that school and gone back to the public education system, and Sharon was fighting some battles with the private school, Buzz commented, “You know, for a Christian operation, they sure do love their Old Testament.”

Buzz’s brain—and his imagination—was big enough to encompass a loving creator God and evolution, with room to spare for Boy Scouts, the American Civil War, his own war stories, jokes, poetry, wooden boats, tall ships, books, the Sierras, the Adirondacks, John Wayne and the Mike Meyers movie So I Married an Axe Murderer.  (Buzz loved to imitate Meyers in the wedding reception scene, saying, “We have a piper dooon.”) Like many people who try to actually live their beliefs, he often sparred with conventional congregations, impatient with hypocrisy and intolerance.  His son Matt put it more tactfully when he said, “Dad had a little trouble with some of the rules.”

Buzz and Sharon introduced us to the concept of the Burns Night, a dinner held in January celebrating the life of the Scots poet.  Over the years, Buzz and Sharon belonged to two different Scottish heritage groups who put on Burns Dinners.  Buzz would get decked out in his authentic kilt and all the accessories.  They would salute the haggis, read Burns poems, and toast the poet with  a few “wee drams” of Scotch.  Robbie Burns had it all; patriotism, insight, humor, sentimentalism, bawdy stories and a bawdy reputation to match.  There was always quite a bit of “wee dramming” going on, and there would would  be bag-pipers, Highland dances, and Patrick would bring his guitar and play bawdy Scottish songs, and yes, you do see a theme emerging.

In 2000, Buzz and Sharon got to go to Scotland and Buzz met the laird of the Fleming clan.  Buzz was thrilled.  He mentioned that trip every time we visited.

He loved kids.  Being with his grandkids and his great-grandkids flooded him with joy.

He had these quaint, old-fashioned ideas about life.  He thought that people should be true to their word.  He thought that teaching was a sacred trust and that the minds, hearts and imaginations of children were literally the future of our country and our world.  He thought that love should be shared and that you should respond to the best in people, not the worst.  This last choice, a commitment to giving people chances, meant that once in a while he blundered.  It wasn’t very often. Usually, the person who didn’t step up to Buzz’s trust and expectations as a youngster has succeeded as an adult. Those folks remember Buzz’s faith as one of the reasons they overcame the obstacles in their lives.  Buzz loved people, and as his daughter Kim said, “Everyone loved my dad as soon as they met him; or, if it wasn’t as soon as they met him, it was twenty minutes later when they go to know him.”

He left not a materially rich legacy but a story-teller’s treasure-trove.  He was a man who managed to live the life that fulfilled his passion and gave him bliss, and he didn’t stop there.  He shared the wonders of the world with his own family, honorary kinfolk like us, and with two generations of children. Buzz’s children, biological or spiritual, won’t get lost in the woods.  They will find their way, no matter how dark it is, or how hard the wind blows, because they will have his words whispering in their hearts, and the memory of how he looked at them; with love, pride and trust.

And one clear call for me!

And may there be no moaning of the bar,

When I put out to sea,

But such a tide as moving seems asleep,

Too full for sound and foam,

When that which drew from out the boundless deep

And after that that dark!

And may there be no sadness of farewell,

For tho’ form out our bourne of Time and Place

The flood may bear me far,

I hope to see my Pilot face to face

When I have crossed the bar.