Breakfast at the Harbor 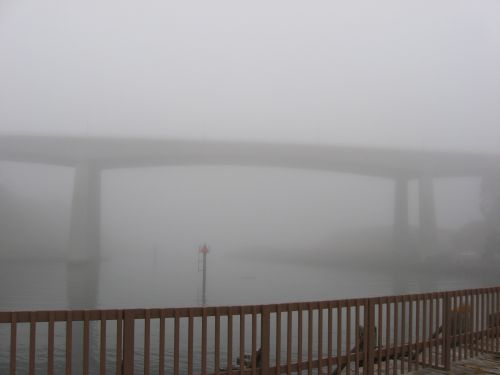 I pulled into a parking space right in front of the narrow one-story blue diner. The sign read “Open,” but no lights were on inside. A small silvery SUV pulled in next to me. In the passenger seat, a thin woman, her brown hair scooped up on top of her head, fumbled with her shoulder harness, twisting back and forth. I recognized her from the last time I had eaten here. She shoved open the door and bounced out.

I said, “Good morning. Are you going to be open?”

“Sure, sure, let me get some coffee started and we’ll be open,” she said, shrugging out of a quilted black jacket and tossing it into the back seat. “You can hang out.” The driver, the man, walked in ahead of her without speaking, keys in one hand. I followed them in. The man’s sweater was a brownish green color, like the algae you can find along the edges of the Noyo River in the late summer. There was no breakfast menu posted.

The unlit room was cool, smelling of fish and charred wood. I walked to the table at the end of the dining room. The air got colder as I walked. Pale yellow crumbs dotted the table like pebbles. I used my forearm to brush them off.

Behind me, metal squealed. I turned. The man held up a spill of newsprint, lit it, and fed it into the open maw of the woodstove. He peered over at me. His eyebrows winged up at the ends and his eyes matched the color of his sweater. “Did you open that window?” he said, pointing past me.

I shook my head. I hadn’t touched anything except the table. He shut the stove door and walked over. “I’d better close it then.” He slid the window shut. “I guess that was open all night. That’s not good.”

“You don’t want the raccoons getting in.”

I nodded, surprised. I had thought he was going to say, “cash,” even though I’m sure they empty the till every night.

While the coffee brewed I walked outside onto the wharf. The fog, which had been drifting in steadily since dawn, had condensed, turning the buildings on the cliff rim into blunt shadows and the bridge into a trailing arch of silver under gray. I took a couple of pictures and watched a seal stitch its way in long loops through the dark green water.

Saturday, the day had dawned with a faint sparkling of mist around the edges of the harbor cliffs, which soon evaporated, leaving a glorious day filled with blue skies and a blue ocean, complete with a cool breeze. This morning, checking out of my hotel, I said to the clerk, “Yesterday sure was pretty.”

Back inside the restaurant, the coffee was ready. The woman served it in a white cup with a curlicued handle, a small blue flower on each face of the cup. The coffee was not as strong as it smelled, but it warmed my tongue. I got into a conversation with the man in the green sweater. It started with him asking where I was from. I told him; he decided that made me almost a local.

We discussed the standards for “local;” he said they had moved there ten years ago and were still not considered locals. I told him about my parents moving to Puget Sound in the 1970s and how twenty years later people on the island talked about them as “those new folks down at West Beach.” He talked about the web of related families on this stretch of Mendocino coast; the businessmen, fishermen and homeless bums who all went through school together, married each other’s sisters, and that you can’t break into that. Even when they hate each other, even when they feud, they’re family. I said that I had noticed that many of the names in Fort Bragg, Caspar and Mendocino went back several generations and he agreed.

He asked if I were a teacher. “You’re very verbal,” he said. “Articulate, I mean. Most people like you, when they come in here and start asking questions or strike up a conversation, they’re usually teachers.”

I told him I wasn’t, that I’d been here for the writing conference.

“I used to teach writing,” he said, “In Arizona at a private college. Twenty years ago, before I blew up my life with drugs and politics. I got out. I had to do something really different. Now I don’t read fiction, hardly at all, maybe one book a year.”

He disagreed. While he was talking about TS Eliot, Melville and Faulkner, which kids used to read in school (but not anymore) the woman brought me my French toast. The thick slices of battered bread were piled overlapping on the diagonal, forming a starburst, wedges of cantaloupe, pineapple and kiwi interspersed. The cook brought the same eye to her food presentation as she does to her fractal paintings which lined the inner wall. I told her that. She gave me a smile; the muscles around the mouth moved but the ones around her faded-denim blue eyes did not.

While I was excavating my way around the architecture of my breakfast a couple came in, about equal height, slender. She had short russet hair highlighted with strands of gray. He had a trimmed gray beard and gray hair.

“Now these folks, they don’t talk at all,” said the man in the green sweater.

“Not a word,” the woman said. “Here’s what I’d like,” and she ordered without seeing a menu, all side orders, nothing that had been printed on the broadsheet I had been given.

The man pulled out a small laptop and opened it. He shared some footage, apparently, with the Green Sweater man. At the end they laughed and all said, “Good dog.”

Green Sweater Man came back over to my table. He said he wanted to recommend a book to me; he didn’t remember the author but the title was Story. It was a how-to book about writing for Hollywood, and he knew people who swore by it. I agreed that “Story” was an easy title to remember and said I could probably look it up on Amazon.

“The writers’ conference is right over the bridge,” I said, pointing with my fork. “Maybe next year you could go.”

He started shaking his head. “Nope. Nope, can’t do it.” He made a swinging gesture with his arms, embracing the restaurant. “Can’t do it.”

I nodded and took a bite of French toast. The outside was crispy and the interior soft, and it had soaked up just enough maple syrup.

I swallowed, took a sip of coffee. I didn’t have anything to say.

I ate about half of the French toast. It was delicious, and I was stuffed, and starting to quiver from the intake of real coffee. I watched a white fishing boat pull up alongside, tried to take a picture through the slatted fence, gave up, and settled my bill. I wanted to leave a good tip, but I didn’t want to seem condescending, especially since the woman hadn’t really smiled at my compliment to her artwork. So I did some arithmetic and came down in the area of “rube,” “mark” or even “math-challenged” rather than “stuck-up city folk.” I hoped.

Outside, transparent blue smoke snaked around the chimney-head of the wood stove, diluting itself in the silver fog. I backed out slowly, thinking. I thought about Arizona, and the Mendocino coast. I thought about drugs and politics, and what a strange yet natural combination that was. I thought about the conference I had just left, and showing not telling, and writing in scene and using dialogue and how unusual it was that, at the end of the conference, some random person would suggest a book called Story.

The world needs us; the people who can talk.

4 Responses to Breakfast at the Harbor