Tales of the Harbor Lite: Room 309 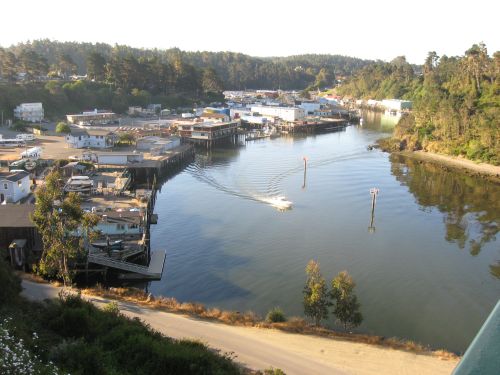 The Harbor Lite Hotel curves around the top of the harbor, two stories of dark brown wood,  just over the long bridge at the mouth of the Noyo River. The place caters to tourists who fish, with a cleaning station on the ground floor and polite signs scattered about asking fishers to please keep their catch in a cooler and not in the mini-fridges in the rooms.  My second-floor room, room 309 –no, I don’t get it either—had a redwood balcony with two metal patio chairs and a small round table. Looking out from it, I could see the tall pylons and the bridge, the stretch of businesses south of the bridge, the curve of the river, the parking lots and buildings of the waterfront,  the boats and the seals. The marina is actually farther southeast around the curve, so most of the boats I watched were either coming out or going in.

Most mornings, the cup of the harbor was filled with layers of thick gray condensation.  Thursday and Friday, the fog never broke, so I came back in the afternoon or evening to a gray landscape.

The Harbor Lite didn’t have the laminated “Do Not Disturb/Maid Service Please” signs that you hang over the door.  Instead, they had a little switch on the door, level with the peep-hole.  Crank the switch one way, and a metal plaque saying “Maid Service Needed” popped into view on the outside of the door.  Crank it the other and it read, “Do Not Disturb.”  I have never seen this before, anywhere but here.  It seemed very retro, sort of 1970’s state-of-the-art.  I decided later that is showed some “green” sensibility, since they never have to replace the laminated cards.

Friday, when I got back to my room, I flipped the switch to “Do Not Disturb.”  I don’t know why I did this; housekeeping had come and gone.  It’s a habit.  I also shot the deadbolt because I tell myself I’m big on hotel security. I wasn’t planning to go anywhere for dinner because just an hour earlier I had eaten a scone, with a coffee drink, at the Headlands Coffee Company.  I had crackers and cheese, some fresh blueberries I had brought from home, and a nectarine.  That seemed like a good-enough dinner, especially since I had a Lee Childs thriller, Nothing to Lose, as a complement.

About eight o’clock I was sitting on the edge of the bed, one leg tucked under me, one on the floor, reading and sipping from a plastic glass filled with ice and fizzy mineral water.  Someone thumped on the door three times.  I jerked and splashed water on my pants.  They thumped again.

I got up and started for the door.  My heartbeat jolted a little when I thought it could be some kind of emergency.  Another pace, and I wondered if it were someone from the conference.  Donna, Mark, Cheryl and Jerry were staying across the highway at the Emerald Dolphin, but there were others from the conference staying here.  How would they know my room number, though?  “Who’s there?”

Someone warbled, “Housekeeping,” in a falsetto.  As the word implies, a fake high-pitched voice.  I stopped in front of the door.

Several years ago I went to Orcas Island, in Puget Sound, to visit my dad and stepmother.  I stayed at the Orcas Hotel, the refurbished Victorian Inn across the street from the ferry landing.  I had made it onto the island that day, had dinner with the folks, and about nine pm I was in pajamas and a robe, under the covers with a book, when someone pounded on my door.  “Come out, gorgeous!” a man bellowed.  It freaked me out.  There was a popular bar on the ground floor; now I was going to have to interact with some guy for whom happy hour had lasted 180 minutes.  Sighing, I slipped my feet out from under the blankets, when the same man, sounding less hearty and more tentative, said, “Marion?”  It was my stepbrother.

Later he said, “With my luck, I thought I had the wrong room.”  Then he told me a story about his uncle, who had stopped at a hotel where he knew sister-in-law was staying.  After a couple of beers in the lounge, his uncle went up and pounded on the door, saying “Come out, gorgeous!”  And he did have the wrong room.

It was not likely to be either of my stepbrothers standing on the threshold of my Fort Bragg hotel room.

I looked through the peep-hole at a slender young guy with short blond hair, wearing a camo T-shirt, who peered back in my general direction.  His skin had a golden tone and his eyes looked dark.  He was grinning.  I didn’t know him.  I already felt bad, knowing I was going to spoil the joke.

I unlatched the bolt and opened the door.  So much for hotel safety.

His eyes widened.  “Oh, fu—uh, um, I’m sorry!” he said.  He looked over his shoulder, over the railing into the parking lot.  “You guys!  You told me 309!” The intended surprise was clearly on him.

From below, “That’s what he said!” someone shouted back.

I felt like I should say I was sorry for dashing his expectations, but I just smiled again and closed the door.

I hope he found the right room eventually and was able to carry out his surprise.  This might be a cautionary tale, though; for him, not for me.  It’s not about opening the door.  Maybe the moral of the story is about the benefits of doing your own research.