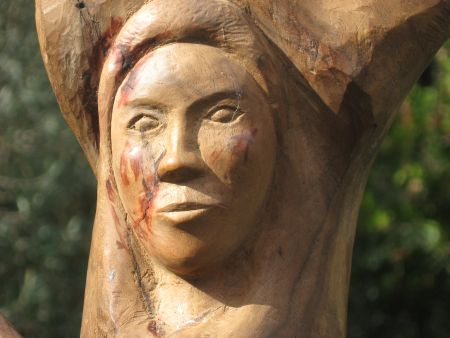 Back in November I started a first draft of an urban fantasy.  I had a placeholder character I named “Pixie.”  I chose Pixie for a couple of reasons.  The first was that I knew the character was going to be magical.   Pixie was a personal joke for me, because I knew whatever the character was, it was not going to be anything like a traditional pixie.

A woman named Pixie works in the floral department of the neighborhood grocery store.  She’s been there for at least fifteen years, has a teenaged daughter and a sweet sense of humor.  She can do amazing things with floral arrangements and manages, now and then, to bring in startling and unusual plants and flowers.  I don’t know if the name Pixie shaped her destiny or if her destiny influenced her name, but it was probably on my mind when I was mixing up the elements of this fantasy stew.

I knew my character worked in the “front office” in the story, and that in this book at least, he/she (I figured probably “she” but I wasn’t sure) did not figure largely, although the character would have some important role to play.

As I began to develop the character of my wizard, Elias, I realized that Pixie’s character had to be something unusual and uniquely Californian, since there is a sense of transplanted loyalty with Elias; although he comes from a European wizardly family, he is somehow connected, rooted to, California.  This concept isn’t well formulated yet either, but I’m working on it.  I also knew that Pixie was going to be somewhat unusual looking and that people were going to have a hard time figuring out what her ethnicity was. Then I had a foggy image of what she looked like; brown skin, thick brown hair in a hundred small braids, high cheekbones, a calm, contemplative demeanor. In fact, she looks a lot like the face on a wood carving my friend L brought me from Hawaii long ago. Taken literally, getting inspiration for a purely Californian character from a Hawaiian statue would seem to blow the whole concept.  If you factor in the creative process it makes perfect sense.

That is just a face, in and of itself not unusual, especially not in Berkeley, so there will be some other aspect of her physicality that will be outside the norm.

I’m also playing, in the story, with the ideas of “rootedness” and networks; several kinds of networks; faultlines in the earth, electronic networks, connections of blood, obligation and loyalty.

The book is set in Berkeley, so I needed a Berkeley-style name.  The idea of rootedness, history and names came together, and I knew exactly who and what she was.

This entry was posted in Thoughts about Writing and tagged Berkeley, California, names, Writing process. Bookmark the permalink.

3 Responses to A Character Emerges