Sunset Line and Twine, Part I 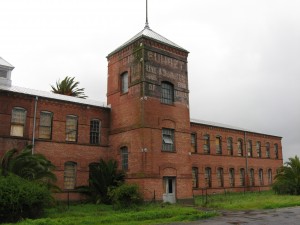 The rain turned the air a shimmering silver. In my car, I checked my cameras, hoping it would let up soon. Half an hour earlier the clouds had thinned, paled, and it looked like the rain was over, but now the drumming on the roof drowned out my flamenco CD. Behind me, Lakeville Highway was deserted, a streak of flat pewter, twin to the Petaluma River just beyond it.

For the film camera, the 105 mm zoom lens, and two spare rolls of 400 speed film; for the digital, fresh batteries and a set of spares. I looked out the water-streaked passenger window, where a sign in the boarded-up window of Sunset Line and Twine informed me that This Property was Patrolled.

Sunset Line and Twine sat on a trapezoid-shaped lot southeast of Petaluma’s new theater district. It started its life as a silk mill in 1892. Later, maybe the 1930s, it converted to nylon fishing line. The phantoms of the signs for these products still lingered on the red bricks of the long façade, especially on the two square, three-story to 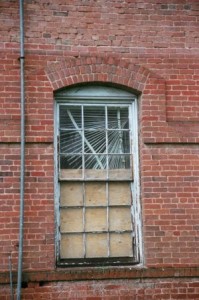 The rain began to slow, or maybe I just imagined it. I slung cameras and cases around my neck, dragged up my umbrella and clambered out of the car. I locked my purse in the trunk and walked around to the imposing façade. Nearly every window was broken, most covered with plywood. In the north wing, gray-white Venetian blinds still hung above the plywood, some pulled in quarter-circle shapes like a lady’s fan. I imagined a worker, or a boss, suddenly yanking up the blinds to let in the morning sun. From a distance, across the driveway, standing under one of the dripping trees with water soaking through my walking shoes, I could imagine that the toasted-gold plywood was candle-light and that the place was a large, exclusive private school—or the Arkham Asylum. A rusted metal fence surrounded the place, but it was broken down in at least three places.

I stood in mist now, the rain having faded, leaving an icy wind that snatched at my collar and made my hands shake as I tried to frame a shot. A quivering black-and-white sign lashed to the fence warned me; No Trespassing. Next to the sign, new grass grew up over the flattened fence. I took a handful of shots of the south wing, where each window was boarded and no blinds showed through, and then moved over to get pictures of the tower. The two towers were not at the ends of the building but rather divided the face into thirds; three story sentinels, each with doors that opened, now that the metal balconies had been removed, onto air. The windows in the tower were not boarded, and they gaped dark and blank. At the second story window, something moved. I turned my head and it dodged back out of sight. I could feel my heart pound. I raised the film camera and zoomed in, trying to decipher the figure. My chest felt tight. The figure moved again. It was just a scrap of translucent plastic, weathered to lace and fluttering in the wind. I relaxed. I took a picture. I shot a few mo 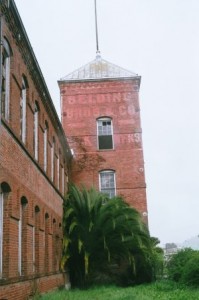 re frames and walked along the façade.

The factory did look as if it could be . . . well, if not haunted, exactly, at least inhabited, and I was out here by myself this rainy Friday afternoon. As I moved closer, framing a shot of the palm tree that squatted in the tower’s corner, I heard, over the wind, the scraping, a rustling.

I lowered my camera. The noise stopped. It had been a specific noise; not tree branches rubbing, not the wind itself. It sounded like footsteps scuffing on pavement, or fabric shifting. I looked around, turning in a circle, but there were no other people near the factory, no cars on the road. The sound came again, riding above the wind, a rustle, from the direction of the tower—the tower whose ground-floor door had one glass pane broken out, leading into darkness.

I turned back, scanning the windows, even the dark tower window with its fluttering plastic, but I saw nothing else. As I moved, the sound stopped again, as if it could see what I was doing, and was shaping itself in response to my actions.

The back of my neck tingled and it wasn’t just the wind. I swept my gaze along the lush green grass that grew right up to the building’s foundation. It could just be rats. That would be scary enough. The grass undulated with the wind, flattening and straightening, but nothing else moved there. Nothing living, anyway.

I took one step, and another, toward the tower, toward the white wooden door with its broken pane. I could have reached out and touched the cold gritty bricks. I stood next to the gap in the fence, an easy entrance; but the broken pane in the tower door made entry even easier.

The wind shook me, thrashing the palm fronds, tugging on the strap of my camera bag, and my hair. The metal fence squeaked and, next to my right shoulder, came that rustling, scraping sound. The metal No Trespassing sign rattled with each gust of wind. This was the source of the sound. . . a No Trespassing sign.

My shoulders dropped down away from my ears. After all that, it was just the wind. Honestly. Well, how silly of me to surrender to my imagination, to think that this huge long-abandoned factory with its shattered windows and rusted doors could hold anything to fear.

This entry was posted in Thoughts about Writing and tagged derelict, Petaluma, photography, silk manufacturer. Bookmark the permalink.