I stared at the spokes of light and shadow on my hotel room ceiling, wondering why I was awake. 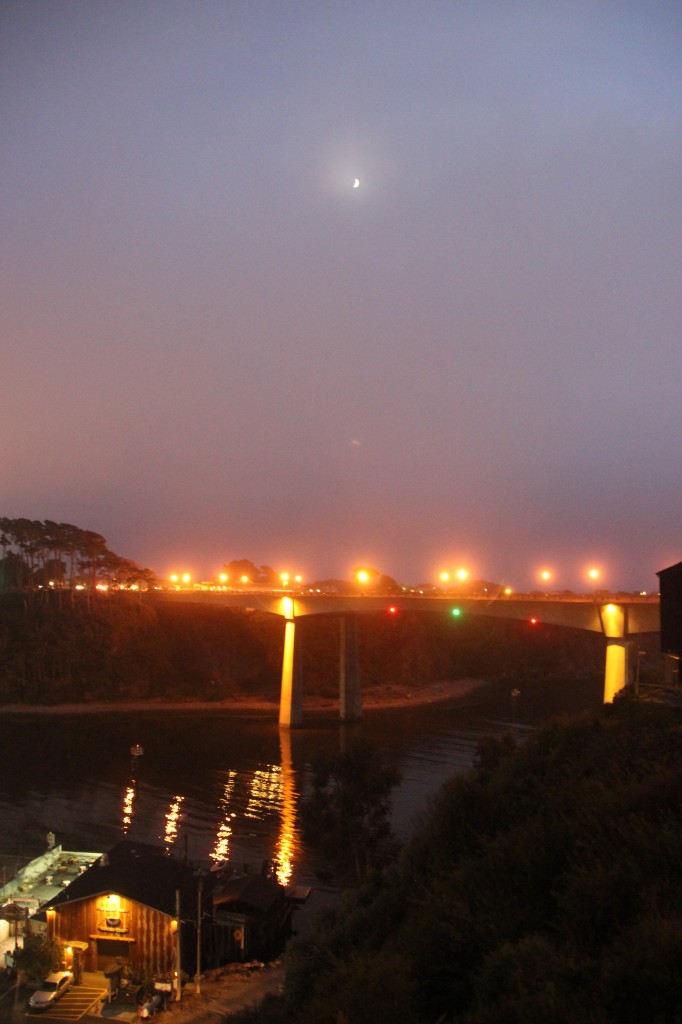 It was mostly rhetorical wonder. The Mendocino Coast Writers Conference finished that night, with the banquet, ending in a speech by Scott Hutchins that included a drinking game (a drinking game!), and a standing ovation for Maureen Eppstein. I missed the banquet, but got there in time for the last half of the speech, and the acknowledgment of Maureen. Always, the last night of the conference made me feel like my brain was a blender set to Puree, as I processed the previous three days.

I rolled over onto my side and looked at the clock radio. The crimson numbers glowed at 11:59. I closed my eyes and when I opened them again, the numbers had rearranged themselves to 12:02. It was Sunday. The conference was officially over. I wished I had opened my eyes right as the numbers mutated to 12:00. Writing this, I thought about crafting it that way, but 12:02 is better, more random, and that’s what really happened. Honest.

I got up. I pulled on my Extra Large MCWC hoodie, so large and snuggly it could double as a bathrobe, and, barefoot, went out onto the balcony. Below my knees, cool air sniffed around my ankles and feet. The bridge was alight. Red and green lights flashed along the side, and in the light from the wharf the south pylon’s reflection canted like a cooked lasagna noodle. Someone down at the harbor coughed. I scanned and found a human, far below me, a slender figure with a dark cap and a white shirt, who coughed again. The cough didn’t sound close, but it carried clearly and unmistakably, and when the person took out a cell phone and started talking, sauntering in a diagonal across the parking lot, I could hear the voice. I couldn’t make out the words, but I knew the speaker was female, and from the musical lift-and-descent of her voice I would guess the speaker was happy. 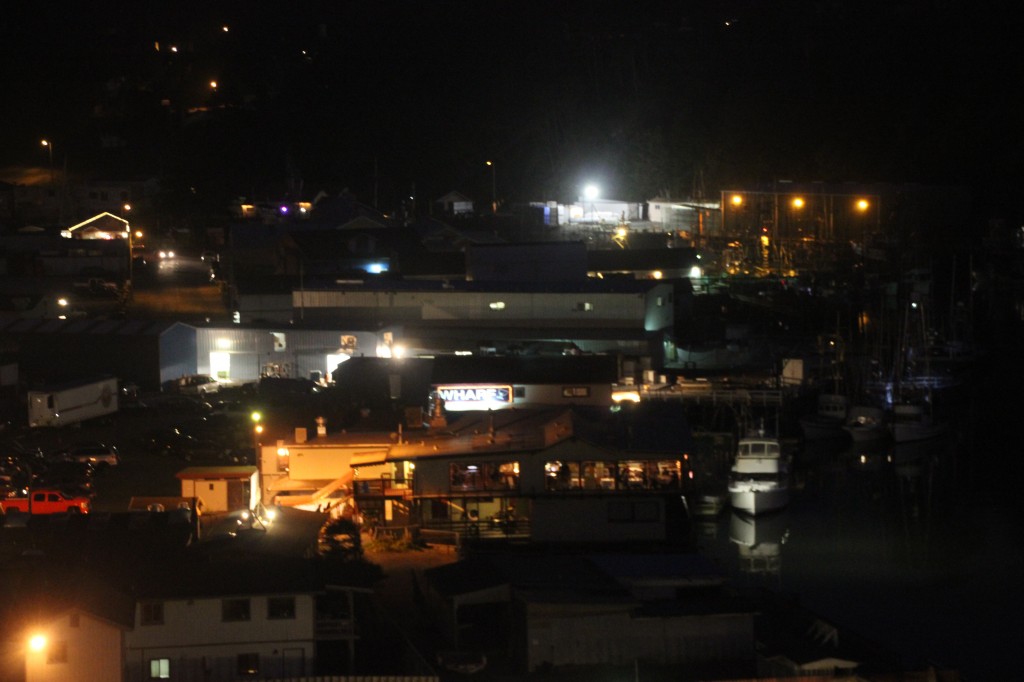 It got quiet, and in the quiet, I heard voices.

The mouth of the harbor and the split-level design of the Harbor Lite created an amphitheater effect, that narrow tongue of the Pacific Ocean a glistening reflective membrane, a drumhead driving sound as if with V-shaped hands toward the balconies. These voices came from speakers sitting in a little clearing alongside the bridge, almost underneath it. I had seen the spot, walking, and I had seen the backpack-toting, bundled-up, moccasin-wearing, often-smoking locals walking down there, or up from there in the mornings.

One afternoon one of them, a burly man in jeans and two puffy navy-blue jackets, with a nest of black curls and a black beard, was sitting on the very edge of the bridge, in the pedestrian space, smoking. He held his cigarette down, away from me, as I passed.

“Did you see the harbor seals?” he said. 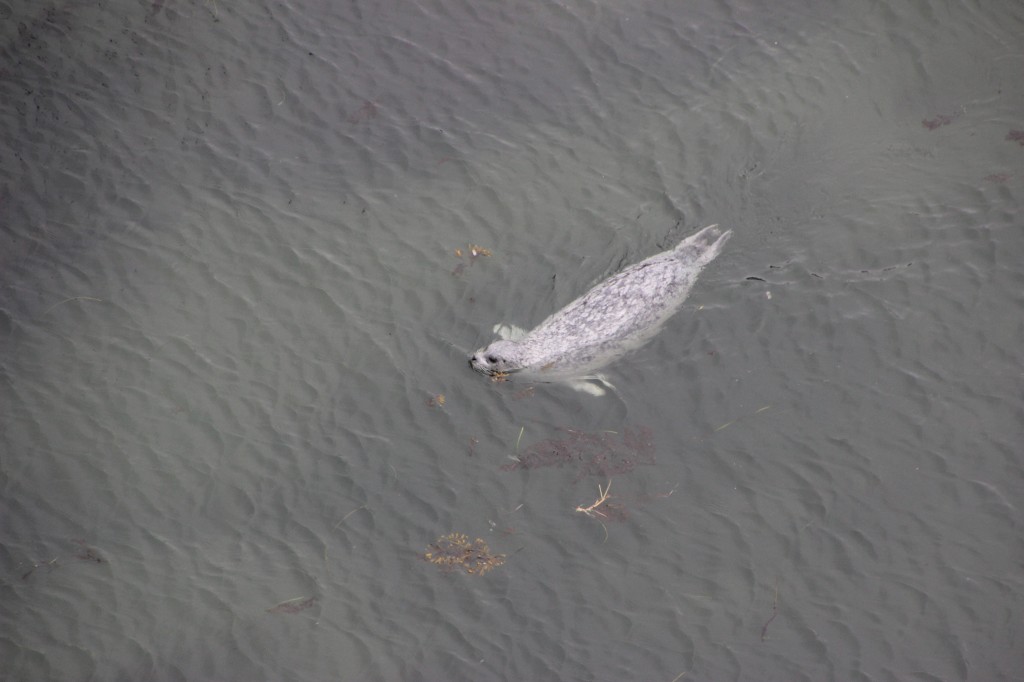 The voices I heard now, at 12:11 AM on a Sunday in August, were both male. After a couple of exchanges, laughter wafted over to me. The conversation grew lively and the word “boat” emerged.

Scott talked about why we write. This is a common topic among MCWC keynote speakers. It probably is at any writers conference, and why wouldn’t it be? It’s the fundamental question. From the bummed out, defeated, “Why am I even doing this?” that bursts out of us when the scene just doesn’t work, when fellow work-shoppers just don’t get it, when the agent says that our work just isn’t ready. It’s the question we ask ourselves about why we’ve chosen this particular style of communication, of imaginative inventiveness, of art, when we could have painted, or carved wood or decorated cakes.

Voices carry, and they are more than air expressed across vocal chords through a larynx, shaped by lips, teeth and tongue. They carry from the arguing couple at the table next to yours. They carry from that odd internet article you read. They carry from parking lots in harbors up to people on balconies and from bridges.

“Only connect,” Scott said, near the end of his speech, quoting E.M. Forster. We write, Scott suggested, for the same reasons we read – to dream, to experiment, to learn, to connect. Only connect.

In the 1980s, Til Tuesday had a hit song called “Voices Carry.” For a long time I thought the song’s title, and chorus, was “This is scary.” Maybe I wasn’t wrong.

I write to hear the voices. I write to be a voice. I write to share the idea – the story – of a young woman in a dark cap, coming off her shift in a restaurant in the harbor at midnight on a Saturday night, getting over a cold, maybe, calling her boyfriend on the way to her car. I write because, over near the bridge, two local guys are slugging back beers and talking about some dude’s boat. And maybe I just write to remember that I’m not alone in the vastness of midnight, at the edge of the world. I’m a voice, and voices carry.