Rogue One; It’s a War Movie and it Satisfies

I saw Rogue One with my friends Greg and Mary. We were pretty late to the party but finally we are current (Greg has been enforcing a spoiler-embargo on family and friends which is now lifted).

Bearing in mind that I haven’t seen all of the so-called “second” chapter and only five minutes of the “third” (and that was by accident), but I have seen The Force Awakens, I wasn’t sure I was going to be able to follow all of Rogue One, but it was no problem. This  film bridged the prequels and transits nicely to “A New Hope” (the movie that used to be Star Wars). 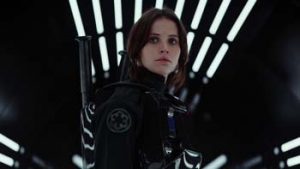 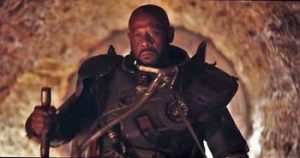 Rogue One takes place shortly before the events in A New Hope… in fact, the final scene happens moments before the opening sequence in that film. First though, we get the back-story of our main character, Jyn Erso, played by Felicity Jones, who is the daughter of a disillusioned Imperial scientist and his warrior wife. When the Empire comes calling, intent on bringing Galen Erso (Mads Mikkelsen) back to work for them, Jyn hides and is raised by a rebel named Saw Gerrera (Forest Whitaker). Later, out on her own, she is rescued/abducted from an Imperial work detail by the Alliance, who want her to contact Gerrera and validate a secret message allegedly from her father. Escorting her to the rebel base on Jedha is Captain Cassian Andor, (Diego Luna) a ruthless fighter, and along the way they pick up a blind martial-arts monk, Chirrut (who is not a Jedi but who believes in the Force) and his partner Baze. Pretty soon, Jyn knows the whereabouts to the plans for the Death Star planet-killer weapon, complete with the deliberate flaw her father built into it, only the Alliance is too fearful to go after the plans. 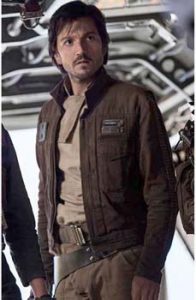 The story is tense, action-packed and beautiful, with lots of grace-notes and nods to beloved Star Wars characters (and in the final space battle sequence, some cameos). There is plenty of mutual suspicion as the film opens; Jyn, left on her own, is not a rebel at first and is bargaining for her freedom; Andor has been given secret assignment that will not make Jyn happy if she uncovers it; and the reprogrammed battle droid that helps Andor is suspicious of her from the start. When they pick up the imperial cargo pilot who has changed sides to help Erso, everyone suspects him too. This makes for nice dynamics in between huge CGI-fueled battle scenes and creates rich, intimate scenes when they are needed.

One of the best of the not-action sequences is when Jyn listens to her father’s secret message, the one smuggled out by the pilot Bodhi (Riz Ahmed). The camera stays on Felicity Jones’s face as she hears the first words from her father in over ten years. There is another small, tense scene between Andor and Jyn when she realizes what Andor’s original assignment was. 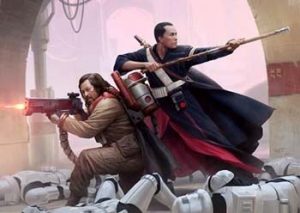 Everything the Star Wars franchise does well, it does well here; blending CGI with live action; sets; costumes; action; banter; humor, suspense and timing. This series has, in the past, faltered badly when it came to story, and with Rogue One, like The Force Awakens, they seem to have cleared that hurdle with little difficulty. SPOILER ALERT: The story here is a specific type of war story, and it goes exactly the way that type of war story goes. That said, it’s a good take on the story, with charismatic actors who create just enough character to make us care. (While Jyn has a backstory, Diego Luna is solely responsible for making Captain Andor engaging since we know nothing about what he’s lost, given up, etc in the rebellion.) Felicity Jones made Jyn work when I had my doubts.

I liked it, I’m glad I finally saw it and I can recommend it to any Star Wars fan.

(Fair warning: in a later post I am going to make fun of this franchises’s terrible character name choices.)

This entry was posted in Movies and tagged Diego Luna, Felicity Jones, Rogue One, Star Wars. Bookmark the permalink.

One Response to Rogue One; It’s a War Movie and it Satisfies