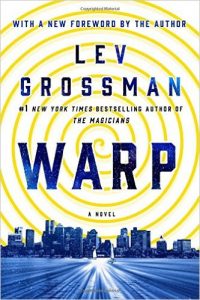 In his foreword to Warp, Lev Grossman says that it took him four years to write it, from 1992 through 1996. That seems a little surprising at first, since it is about 180 pages long, but he clearly did not work on it every day during that time. I can imagine him writing and deleting scenes and vignettes, agonizing over just the right word, and walking away from it for weeks while he turned the words over in his head.

He also says that this book (reissued by St Martin’s Griffin) is a period-piece, and it is that, a polished slice-of-life of an entitled, bored Gen-Xer named Hollis who must face the fact that life has not dropped to one knee and offered him all his fantasies come true on a silver platter.

Hollis lives in Boston. He is dodging his landlord because he’s behind in the rent. He isn’t working, not even temp jobs. He hangs out with some male friends who apparently are slightly more checked-in than he is – it seems like one of them might have a job, and the story revolves around a plan to go stay at a house in Dover for the weekend. At first it sounds like they’ve been invited to the house. Then it sounds like one of his group is house-sitting. Then it gets murkier than that, and the adventures of the house become the activity-framework (I can’t call it a plot) that much of the book hangs on.

Hollis is also pining after the woman he broke up with, Eileen, and as the story continues he meets another woman, Xanthe. Xanthe is as far from Eileen as it is possible to imagine; a woman whose very name in is question, whose work is interesting, and who he meets while she is hacking the service phone next to an ATM to make long distance calls to Scandinavia. Hollis, is, to the extent he can be, infatuated, and Xanthe continues to make random appearances in his life throughout the book, which covers two days.

I didn’t like Warp, if “liking” a book means I enjoyed reading it. I didn’t “like” Hollis and I felt very little sympathy for him. I think Grossman delivered what he intended, a portrait of a certain type of man (pretty close to himself at the time, I suppose). It’s well written. Each precise word gleams with painstaking, hand-burnished angst. Hollis is a withdrawn observer, reporting on the specific actions of his friends and their words; he is also fantasizing and the work is interspersed with his imaginings of himself as a superhero, as a Count of Monte Cristo style hero, or as various characters in Star Trek; Next Generation (Hollis has a crush on Counselor Troi). Grossman does a great job of juxtaposing the fantasies with the actual boring sequences at the bar, in the car on the drive to Dover, on the sidewalk, at the train depot. Grossman captured the living-in-your-head escapism perfectly, even to the droning repetitions of some phrases or words. I said “droning;” it’s clear that Grossman is doing this intentionally, and it works.

Hollis does scrape up the nerve to go see his old girlfriend. It’s probably not accidental in this book that the ones who are “corporate sellouts,” in the sense of getting jobs, paying their bills, and generally being responsible are usually the women characters. Hollis’s meeting with Eileen is not successful. Grossman writes a scene where Eileen, who still has affection for Hollis, tries, by her lights, to throw him a lifeline. when it is obvious that these two people have no common ground anymore. It is tragic, and it is perfectly done.

Generally, though, Grossman’s observational powers shine in the tiny sequences in this story, like when Hollis finds a single glove on the street, or Peter steers the car to avoid a two-by-four in the road, rather than the long passages, such as the ones in the Dover house, or at the ATM, which read more like self-conscious set-pieces. They’re good; the tiny moments suited me better.

Grossman would go on to have a breakout hit with The Magicians, where similar characters interrupt their drinking and boredom with magic. I didn’t like his Quentin Coldwater character very much, either, until the second book where, instead of being coddled, Quentin faced some consequences. I guess that while this writer depicts this particular character with great accuracy, it isn’t a type of character I’m interested in. I may be remembering wrong, but while, over in Boston, Hollis is mooning around watching his landlord’s girlfriend walk her pet ferret, out here in the uncivilized provincial west Gen-Xers were doing fundraisers for non-profits, staging protests and experimenting with art and music. As I said, maybe I’m remembering it wrong.

All that said, Grossman delivers what he intended, and this short novel is a clear window into a certain time, a certain social class and a certain mindset. It is worth reading, and it won’t take you too long.

This entry was posted in Book Reviews and tagged Angst, Gen-Xers, Lev Grossman, passivity, The Magicians, Warp. Bookmark the permalink.