I’ve been watching the Netflix version of Daredevil, Season One, On Demand, and I have to admit I haven’t been liking it much. I’m still watching, though, and one reason is because of Episode 10, Nelson V Murdock.

I don’t understand or like Daredevil as a character, and while Charlie Cox is doing a fine 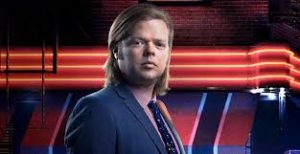 job in the title role, those feelings have not changed. If anything were going to change my feelings toward Matthew Murdock, (AKA the Black Mask, AKA The Devil of Hell’s Kitchen, AKA just about anything except Daredevil), it would have been Nelson v. Murdock, in which Murdock’s best friend and legal partner, Foggy Nelson, finds out the truth about the Black Mask (that’s Murdock), and confronts him.

Nelson, played brilliantly by Elden Henson, has been one of the two rays of sunshine in this dark series. Nelson and Murdock have been friends since college. They both grew up in Hell’s Kitchen, with very different experiences. Foggy thought he knew Matt, and with this discovery and betrayal, he realizes he knew almost nothing about his friend. Or, to put it more accurately, he did know a lot about his friend. It’s just that the things he didn’t know change everything. 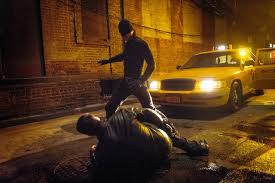 Because nothing says “Justice” like beating up some random guy in an alley.

I never read the Daredevil comics, and my introduction to this character was via the Ben Affleck movie, which didn’t really do much to sell the character. Matt Murdock was a brave boy who saved a pedestrian from a runaway truck, and got splashed with toxic chemicals from the truck for his trouble. He lost his sight as a result of that incident (his eyes look great, by the way, not a hint of scarring), but his other senses developed to compensate… and continued developing until Matt reads vibrations and scents change in the air and can virtually see. His boxer dad (there’s no mom, surprise!) made a living by throwing fights, but double-crossed the fixers in his last fight. They killed him in revenge. Matt went to college to become a lawyer, and “Foggy” Nelson was his room-mate. While they were both offered associate positions at a fancy-schmancy Wall Street law firm, Matt persuaded Foggy that they should go out on their own and be community lawyers, finding justice for the people of Hell’s Kitchen.

In the Affleck movie, Foggy Nelson is a dim-witted materialist, a foil for Matt Murdock’s oppressive cleverness, the butt of every joke. In the Netflix series, Nelson is the real deal. He’s genuine, he’s funny and he’s plenty smart. He’s realistic about wanting to make money but he is on-board about working within the system to help people. He thinks that’s what Matt wants too, and when he finds out it’s not, his hurt and dismay snap this series into complete emotional focus.

In the two or three episodes leading up to “Nelson V. Murdock,” it is Foggy and their receptionist Karen who are behaving heroically, helping an elderly woman in a tenement keep her rent-controlled apartment while she is being harassed and threatened. Foggy, who is not a physical guy, nevertheless takes on two professional thugs who are trying to beat up Karen. He is doing the paper chase and the paper search. While we viewers all know that this won’t work because of the depth of the villain’s corruption, Nelson is fighting the good fight for real. Meanwhile, Murdock is a) punching people out, or b) getting punched out, or c) getting sliced up or d) getting caught in a firefight with corrupt cops or d) getting thrown in a dumpster… It’s hard to see how he’s helping. It really seems more like Matt Murdock is an extreme masochist who enjoys having other men hurt him. No, seriously. 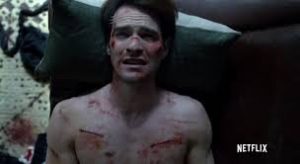 friends, and making their choices. There’s a feeling that, while Matt seems like a nice guy, Foggy may be his first friend. There is a tentativeness to his interactions that is heartbreaking. Foggy seems like a simple guy, but when he is confronting Matt, that simplicity is devastating. Matt lied to him. Matt kept secrets. Matt is not doing the thing he said he believed in. Foggy confronts him, but after he calls Matt’s emergency-room nurse friend Claire to patch up his bleeding friend. He is angry, but he still cares for Matt and he acts on that caring.

We’re at the point in the story where this friendship should be foundering, and the villain, a psychotic land developer, should be in the ascendency, and the Devil of Hell’s Kitchen should be reviled and on the run. This is the part of the plot where the hero’s plan fails and things are the worst they can be. The show gets kudos for making the revelation of Matt’s secret identity so layered, so emotional and so believable. At the end of this episode, two heroes are wounded. I’m going to watch a little bit longer, but it’s because of the decent guy who’s trying to do the right thing. And that’s not Matt.