The Trickster Gods Convention; 2017 in Review

It’s customary… at least I guess it’s customary… well, some people take the week between Christmas Day and New Year’s Eve to review and reflect on the year that nearly past, and plan for the one that’s coming up.

2017 was a year for the history books, certainly. If you believe in trickster gods, they must have been having a convention in our dimension this year, and they got us. They got us good. Globally, nationally and locally it was a year of disappointments and disasters. The politics were mostly bad, with startling sparks of hope and goodness. Natural disasters filled my awareness the second half of the year. Nationalism and “nativism” clawed their bloody way to new heights of prominence and new depths of behavior, egged on by platforms like Twitter. Close friends endured major setbacks in their lives, as did people I don’t even know in places like Puerto Rico, where many citizens still don’t have electricity. 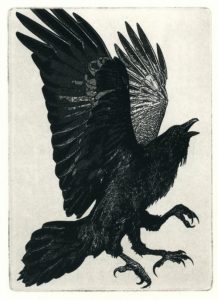 “We totally GOT them! They did not see 2017 coming!” says the three-legged crow.Larry Vienneau, The Three Legged Birds, Etching 2010

We personally emerged from the devastating fires unscathed and for that I am very grateful. On the personal front, I think I dodged, not a bullet but a cannonball, health-wise. It remains to be seen, going into 2018, what kinds of changes I will need to make in my life to keep dodging it.

Personally, much of 2017 was great. My trip to Finland and Iceland was wonderful. WorldCon was the least interesting thing about it, and I still had a good time there. What I learned is that WorldCon is a little too big for me to truly enjoy myself. But I got to see parts of Helisnki, so the whole trip was a plus. 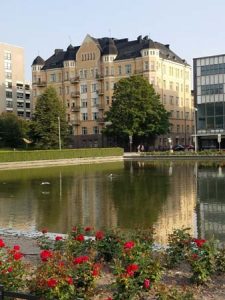 Image from behind the Central Terminal in Helsinki 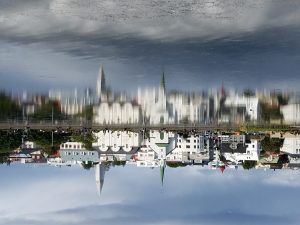 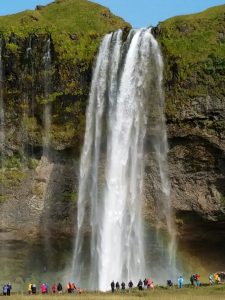 Iceland, an island of glaciers, waterfalls and volcanoes.

And the eclipse! In the middle of a terrible year, a celestial wonder that brought the nation together in a way that was positive and fun. And… how amazing!

I got to spend some time with our friend Sharon, and that is always a plus.

My September visit to Hawaii meant connecting with Linda, Marta and the writing group, and a writing workshop face to face after several years of Skype was like a breath of fresh mountain air (not an active volcano, some other mountain). It was wonderful. And our newest workshop member, Tania, brings intelligence, originality and humor to the mix. 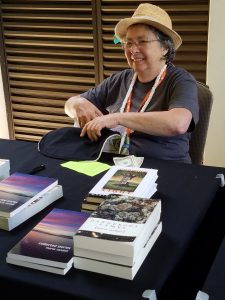 Marta Randall at HawaiiCon, where we almost all met up.

I tend to think of 2017 as a bad writing year, but I have to analyze that because I am reacting to disappointments that are recent. In 2017, a story of mine won a writing contest. An anthology with a story of mine it in came out. And I got paid a little bit of money. None of that is bad.

Weekly writing sessions with Brandy boosted my productivity and kept me going when disappointment urged me to just stop, just give up and stick to something I’m good at, like book reviews. The Benicia crew continued to be a lifeline of support, acerbic observations about the nature of life, a bubbling spring of creativity and all-round hilariousness.

The first half of 2017 I spent finished the first draft of a novel. So it’s done. I guess that’s some kind of a milestone.

I thought I had a good book, but the reaction of my writers group was flat. One person didn’t even finish it. When you don’t finish a book after you’ve made a writers-group commitment to finish, it’s got to be pretty bad. She hasn’t told me when or why she stopped, or what threw her out. I should ask, but to my surprise, I was pretty wounded by the responses in general and hers specifically – too hurt to ask, actually.

On the other hand, I did get an invitation to submit to another anthology. That’s good.

I think my writing is improving. My attempts to stretch my storytelling style, which was one of my 2017 goals, have had some success. It’s left me in a place where it’s difficult to get feedback. Sometimes people who have known you, and your work, for a long time have trouble helping you change direction. I spent the last half of the year feeling betwixt and between.

Events like FOGCon, in Walnut Creek (a literary SF convention) and canvassing in Manteca (political activism) expanded my horizons a bit. I never would have expected to spend 2017 calling my elected representatives on a nearly-weekly basis, but I did. And I will in 2018, too, if I need to.

So is a trip to Florida, in May, just for fun.

In 2016 I gave myself an informal slogan; “2016 is the year I write for money.” And I earned about $600. I did not give myself the same slogan in 2017, and I earned $150. Maybe 2018 will be another year that I will write for money, and I will be more assertive about sending short work out. And I’ll spruce up that novel that nobody likes.

The year ended with two good things. Spouse retired! Really! He’s home, like, most of the time. This will prove interesting. And Brandy opened a used bookstore in the same location as Mockingbird. When Mark and Geronimo moved Mockingbird to Tracy, I felt the loss, and I am thrilled to drive by and see the cheery yellow Second Chances Used Books sign over the window. It’s a joy to get to shelve books and help people find just the right read again. 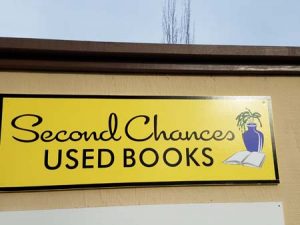 2017? Politically baffling. Economically awful. Physically devastating. Travel-wise, delightful. Creatively mixed. Healthwise, responsible (somewhat belatedly). Family and friendwise, one of the best years in a while. I hated about half of it. And I loved about half of it. Given what we had to work with in 2017, I’ll take that and call it good.

I’d like to say, “We survived the Tricksters Convention!” but I have the feeling they’re not done with us yet. Have a safe and joyous 2018, and take care of yourselves and each other in the new year.