“Is that crow on the stump?” I said. I stood by the narrow six-paned window next to the wood stove in the sitting room. I had been looking at the cluster of sea-rounded stones, bits of driftwood and one crab claw on the window sill, most of the stones and woods marked by a Sharpie with names and dates, like “Happy 51st Amanda, Love Ron,” and “Kia and Joe, 4th Anniversary, 2016.” There was nothing written on the crab claw. Across the meadow a dark shape stood on an old stump. It was black, but small for a crow. “Is it a stellar jay?” I said, thinking that the diffuse light caused by the blanket of clouds were making the bird look darker, if it were a bird. 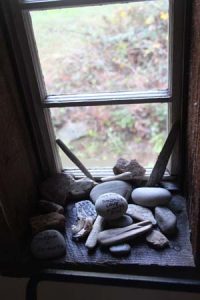 Spouse joined me at the window. “I don’t think so,” he said. The black shape was immobile. A crow or a jay would have preened by now, have becked or turned its head. “Maybe if you looked through your camera lens?” I went and got the camera and zoomed the stump. It clearly was not a bird, but I still couldn’t tell, then, what it was. It was hard to distinguish even though it was such a definitive flat black against  the grays, greens and tans of the stump, against the trunks of the redwood trees.

I went back to the couch and picked up To the Lighthouse.

I had promised myself that I would reread To the Lighthouse over the holiday weekend and I was keeping that promise. I love the way the book requires the reader to slow down, to sink into each line of prose, and how the book rewards the reader for that. At the same time, I could not read it through in one unbroken sitting. Sometimes the story forced me to get up. I’d go stand on our deck between the two red Adirondack chairs and stare down at the onion-spired lodge and the sparkling sea beyond. I’d listen for the raven. I’d wander our cabin, Rose Cottage, which is one of he early ones, a blend of an old fisherman’s cabin (the bathroom and kitchen) and the 1970s imaginings of Eric, with an octagonal window at each end and two skylights, one beam carved into a bird. At night, with the nearly full moon, the cabin glimmered in silvery light and the line of the ribbed skylight over the sitting room and the octagon window looked like a train terminal, someone’s grand central station, somewhere. 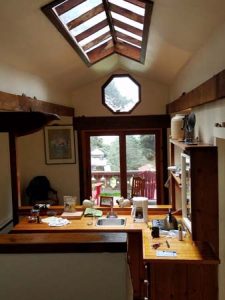 I’d walk away from To the Lighthouse because I needed to contemplate.  I didn’t want to think about the book. I didn’t want to use the top of my brain, the intellect. I wasn’t mulling over the freshman-paper questions: What is the importance of the lighthouse? Why doesn’t Mr. Carmichael like, or at least admire, Mrs Ramsay? Is it significant that while we quickly learn Mrs. Dalloway’s first name in Mrs. Dalloway, we never seem to hear Mrs. Ramsey’s? What does the animal skull in the children’s room symbolize? No, I needed to walk to way to let the prose, the rolling, looping, swooping sentences, settle, or let my brain settle around them, those repetitions, the lines of poetry, the chorus of women can’t write, women can’t paint, the recollection which moves like a virus from Mr. Bankes to Lily Briscoe of Mrs. Ramsey all in gray. Sometimes I walked up the four stairs to the elevated bedroom. Sometimes I looked out the narrow six-paned window. 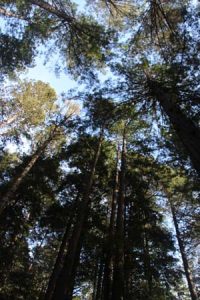 We promised we would go to the bookstore on Sunday if it were fine. Actually, if it had been storming like crazy we would have gone. I got a fantasy novella. Then we talked along Highway One to see Red Stella’s new space. Red Stella is a high-end clothing and accessory shop who moved from Cypress Village into the old Post Office building. They have twice as much space and are right on the highway. That’s got to be good. 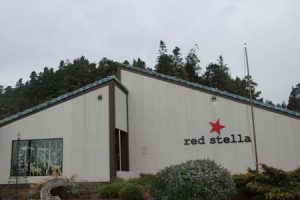 I admired the new roof on the Surf Market, because Spouse was in charge of that project, his final project before retirement. 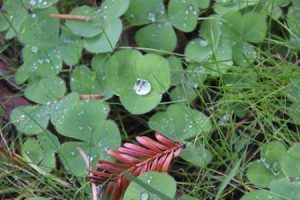 On our way out, we had taken the drive that loops around the Meadows. Spouse slowed down and pulled in as close to the stump as we could. “Well, there you go,” he said. 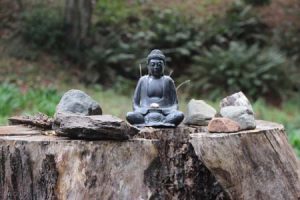 A black stone Buddha on a madrone stumps, surrounded by stones. 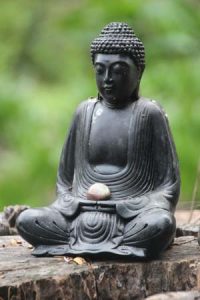 It’s Buddha in the redwoods.

One Response to In the Redwoods