BBC America has cancelled Dirk Gently’s Holistic Detective Agency. The wrap-up episode (with an obligatory cliffhanger regarding the characters of Bart and Ken) of the second season is now the final episode of the show.

I’m not surprised, and I’m not that disappointed, because in most ways, Season Two did not live up to the promise of Season One. The weirdness felt forced, and the alternate dimension was too much of a reflection of better alternate dimensions on TV right now, the most obvious one being Fillory on SyFy’s The Magicians.

Dirk Gently fell into a common TV trap; it counted on a brilliant cast and intentional weirdness to fool its audience into thinking there was more going on than there was. In Season One, where there was more going on, this worked. In Season Two, it almost worked. Scissor-swords worked brilliantly, for instance. The Rowdy Three and Amanda’s evolution worked. Ken’s character arc worked. Overall, though, the villains were under-utilized and in the case of Suzy, under-developed. Once we got the shocking reveal about poor, downtrodden Suzy, she stopped being interesting. Great makeup and an actor who can roll her eyes and act diva-ish couldn’t balance the deficit. John Hannah was completely wasted, which was a shame. In retrospect, it made me like his longer run on Agents of Shield much more.

Bart, the quantum assassin. Is she more than a weapon? Evidence indicates the answer is “Yes.”

The character I feel worst for, and want to follow more, is not Dirk (although Samuel Barnett is brilliant) but Bart, played by Fiona Dourif, the “quantum assassin,” a finely-honed weapon who kills people randomly because “she gets the feeling the universe is telling her to,” only she’s right. She cannot be killed. Point a gun at her and fire, the gun will misfire or the bullet will ricochet. In Season Two, another thing to love is Bart’s tense and strangely mutually respectful scene with Mr. Priest, played by Alan Tudyk. I would love to know what happens to Bart. I’ll also be watching to see what Dourif does next because she is a fascinating actor, who seems to have chosen her father, Brad Dourif’s, path of the quirky and offbeat role. 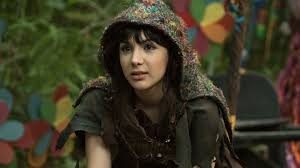 Amanda, learning to own her power.

I loved Amanda’s growth arc and her bonding with the four Rowdy Three (yes, there are four). Basically, everything associated with Blackwing had potential and was squandered in Season Two, but I liked it while it lasted.

Anyway, happy trails to these excellent actors, and thanks for one wonderful season and a season that had some great moments. Thanks for all the fish. Oh, wait, wrong Douglas Adams reference. 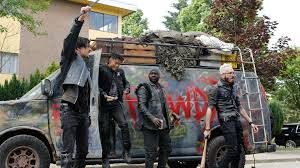 The Rowdy Three, all four of them, and their van.