Not a Guild War, Just a Guild Spat 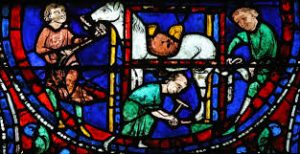 Guilds have a long and eventful history. They date to medieval times, and were the precursors of both universities and, in a way, labor unions. (The Catholic Church disliked them because guild members were required to take an oath swearing loyalty to the guild. Who knew the Church was engaged in union-busting from such an early date?) Their name, “guild” comes from the word for gold; obviously you paid a membership fee and obviously many guilds were wealthy and powerful. Guilds were generally local, and operated with written support of a monarch (letters of patent). They were, pretty much, what we would now call a closed shop. If you wanted to own tools, learn the craft and practice the craft, you better belong to the guild. 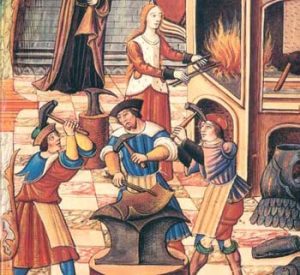 A craft guild. Hey, that’s a woman heating up those metal rods. Want to bet she’s not a member?

I don’t know how you got into a guild. I suspect, because there was also the tradition of apprentices, that you didn’t just go down there on a Monday morning and sign up. You were probably sponsored by a journey-level or master-level craftsperson.

If someone starts something they call a “guild” today, what are they envisioning? The word “guild” is very popular in fantasy circles and role-playing circles. “Guild” these days probably doesn’t mean a group of people who are banding together to enhance their collective bargaining power. That would be a union. What would a “guild” provide today?

I ask because there is a guy who wants to start a group that he’s calling the Science Fiction and Fantasy Creators Guild or the SFFCGuild.  He sees the guild as a professional organization that includes all SF creators, including game developers (I think). He says the organization is about inviting everybody and getting back to good stories, not political stuff.

The SFFCGuild got off to a rocky start. Guild-guy planned to unveil his website, SFFCguild-dot-com, on February 4, but a zealous supporter put something on Twitter and then there were responses, so he had to respond to those, and it quickly got contentious. As of today, the website has a Home statement and a blog post which are the same, and everything else is “TBD.”

The first, obvious question I have, is why the field needs a “guild” when it already has a robust professional organization in the US. The Science Fiction/Fantasy Writers of America (SFWA) is strong. They assist writers with contracts, they make policy, they have an emergency medical fund for members, they provide marketing tips and craft tips and they host the Nebula awards every year. Their Writer Beware and Editors and Predators column is available to anyone (even nonmembers) and the SFWA Bulletin, a monthly trade magazine is available to everyone, even nonmembers, as a subscription. They’ve been around quite a while. You have to have made a certain level of professional-rate sales to join, which seems to make sense.

In 2017, SWFA started including game developers in its membership.

SWFA has issues, like any large organization in this society. Young writers find the emergency medical program, which by necessity is a gate-keeping program, not coverage-for-all, old-fashioned and privileging the olds. The Bulletin had a really embarrassing cover malfunction a couple of years ago. Like almost all of us, they are struggling in a society that seeks to be actively more inclusive and more respectful of everybody – and a society where social media blazons your mistakes across the internet about 1.5 minutes after you make it. They’re not perfect.

There is also Codex, which has a membership requirement too, less strict than SFWA’s. Codex is a marketing and discussion group that is quite robust which also provide information on craft.

And then there is the Locus Foundation, which publishes the trade report Locus and offers periodic intensive workshops on craft with SFF writers like Charlie Jane Anders, Daryl Gregory and Nick Mamatas. 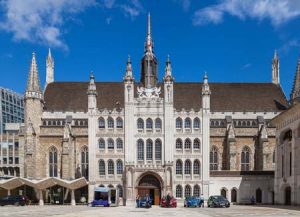 I wasn’t sure what the Guild would have to add. A new group doesn’t have to add anything new, of course. They could differentiate themselves by how they present resources, or elevate a social focus. When I looked at the Home Page for the under-construction website, I realized right away that Guild Guy’s issue is mostly with awards. Here is a quote:

So here we are in 2018 and I find myself thinking the same thing when it comes to the state of science fiction and fantasy and those who have claimed the title of gatekeepers and leaders. For some time now they have led the two genres along a dark path. Science fiction/fantasy used to be about escaping the real world and enjoying well-produced stories of great adventure on the written page as well as the big and small screens and game boards.

Over the past decade or so a certain mind set has insinuated itself into the leadership of science fiction/fantasy – the Science Fiction and Fantasy Writers Association and World Science Fiction Society along with a few other institutions – have steered their organizations toward a more political/social activism bent.

Oh, he doesn’t like SFWA. He dislikes them so much he got their name wrong. Okay. And this is mostly code for, “I haven’t won a Hugo or a Nebula so I’m mad.”

That’s fair. The history of the European colonization of America is largely about people groups having a snit because they couldn’t get what they wanted, and coming here so they could (and taking other people’s stuff, but that’s a different story). We invent new religions all the time here. DragonCon invented a new award recently (Guild Guy hasn’t won one of those yet). There’s no reason the Guild shouldn’t have a Guildie or a Guilda. I think, after doing a smidge of research on Guild Guy, that the contestants would be mostly self-published, and why not?

I qualify as a SWFA member and I joined two years ago. I’m barely a member, but I really like what the group offers. I really enjoy voting for the Nebula awards (and you don’t have to be a SFWA member to be nominated for the finalist list—or even to win the award. You just have to be a member to vote.) I also am dipping my toes into Codex, which is a rich resource too.

It’s probable that the Guild is aimed at indie-published and self-published writers. That would make some sense. This is a growing market. There’s no reason they shouldn’t have their own group. They would have expertise in the self-publishing field. Self-publishing is not my career goal, because it’s too much work and doesn’t play to my strengths. I’m not good at marketing, I’m not good at accounting, and it seems to me when you take on the business side as well as the creative side of the process, you have to be good at those things. So the Guild wouldn’t be for me.

There’s another reason it wouldn’t be for me. Writing and sending work out is hard, thankless work. If  I were to be cynical, I would say that it’s about digging as deep and working as hard as you can to create something true and good so it can be rejected. It’s already bad enough that most writers tend to sink into conspiracy-theory whining when they get together… I wouldn’t want to join a group predicated on whining, and the words in that Home Page statement look like whining. Big time.

The lesson I took away from this was that the SFFCGuild is probably not for me, and the really big lesson I learned was that I need to find myself a good book about the history of European trade guilds, and especially the history of the guilds in London. Those guys sound epic.

This entry was posted in Thoughts about Writing and tagged Codex, Guilds, Hugos, Locus, Nebulas, SFWA. Bookmark the permalink.