The Sebastopol Women’s March of 2018 was supposed to start at 12:00 on Saturday, January 20. I thought that meant the march, which was really more of a walk, since we were only to go a block, started then. It didn’t. We didn’t walk until 1:30.

Clearly I am unfamiliar with events. 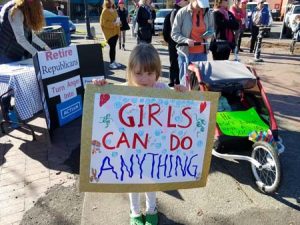 I got to the plaza about 11:40 and there was a small gathering of men and women, mostly wearing pinks, carrying signs. Mr. Music and the Peacetown group (which is also, I think, the Love Choir) were already set up in the pavilion. There were one or two booths, notably a Peacetown booth.

What was not there; voter registration. I thought that was odd, but it might be that most eligible voters in Sebastopol are registered. Wouldn’t you think, though, that it would be the primary thing form our outreach you’d want to make at this kind of event? 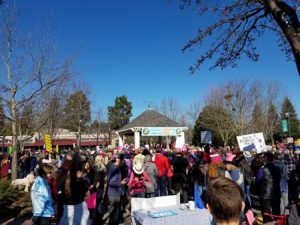 One view of the plaza.

There was lots of pink. There were lots of signs. There were lots of men, too, many carrying signs or wearing them. It’s nice to live in a town where so many men consider themselves feminists and are willing to give up a Saturday afternoon to support women. 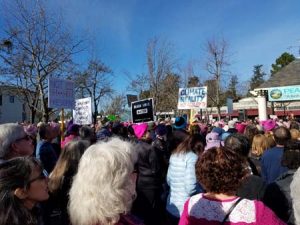 When I was in the crowd or on the fringes I couldn’t hear a word being said over the speakers. When I left the crowd and went across the parking lot, every word was as crisp as fresh lettuce.

A speaker from the Graton Day Labor Center talked about the work done by undocumented women and how it is foundational. As she put it, “Without the work they do, the other work would not get done.” That’s a little extreme, isn’t it? Well, if you consider the people who care for your children, fix your meals, make your sandwiches, clean your hotel rooms, wash and bundle the vegetables you buy at the store, pick the vegetables you buy at the store… it’s not far-fetched. 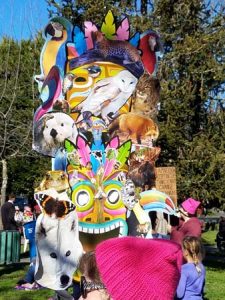 The front was a standard “Vote” sign. But the back…

Another speaker noted that within the Downtown Merchant’s Association in Sebastopol, nearly half the small-businesses are woman-owned. That was inspiring. Later, when I was over at Second Chances, Emma and I made a list, and it is impressive.

On Main Street and within a block in either direction:

At least one of the yoga studios. There are three.

I think but don’t know that Reenie Bird’s has a woman owner, and I don’t know about Kitty Hawk Gallery. 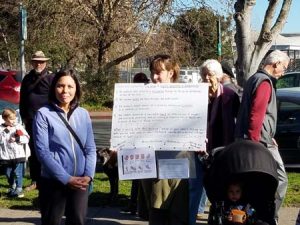 One protester was against reproductive autonomy for women.

There was one anti-reproductive-rights person there, with a friend and her son in a stroller. I don’t know if her sign was a common “sign-making” error, or a clever strategy to lure people in close enough that she could talk to them. Still, I admire her courage. Several times, she was close the “I support the 1 Amendment” person, and that seemed apt.

There were funny signs. 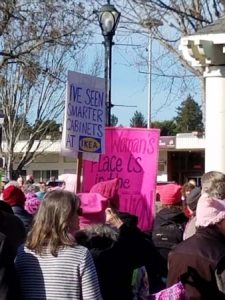 Of the funny signs, the Ikea one is my favorite. 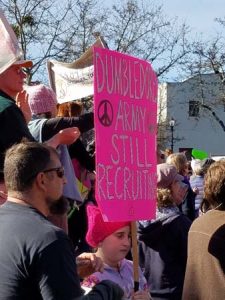 There were serious signs. 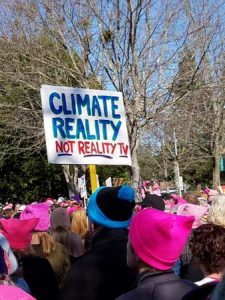 There were inspiring signs. 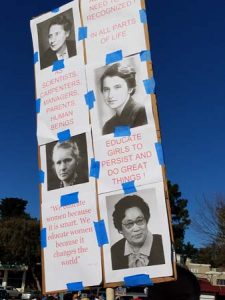 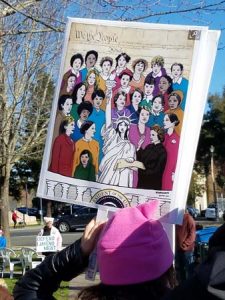 There were signs that were bitter and true. 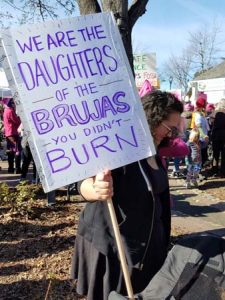 These are the witches that Trump warned you about.

After singing, some speeches, and more singing, then some pep-rally-level chanting, we went on our march. 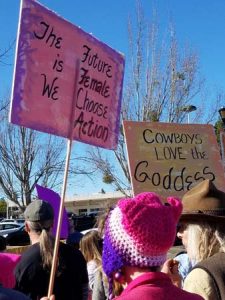 The Hub-bub Club started us off, including playing over the final speaker who was rousing the crowd, but then I lost track of them. It was a quiet march. The women next to me said we had agreed to be quiet since we had to be on the sidewalk and we didn’t want to disturb the merchants (who supported us). Still, as demonstrators go, we were pretty docile. There were a lot of us, though. I maintain, although there are no numbers provided, that about 1200 people  attended.

This entry was posted in View from the Road and tagged events, Sebastopol, Trump, Women's Rights. Bookmark the permalink.