Counterpart: Checkpoint Charlie Still Leads to the Other Side.

Why yes, I do talk to myself. All the time. And your point?

Starz premiered a new speculative fiction series on Sunday. It’s called Counterpart, starring Oscar-winning character actor J.K. Simmons as both nice guy Howard Silk, and lying tough guy Howard (Silk) Prime, in a cold-war-flavored dystopian Berlin, where a secret tunnel leads from our dimension (home of the nice Howard) to another dimension, cleverly called The Other Side.

Howard plays go every morning at a café and then heads off to the job he’s had for thirty years, in a clandestine agency in a monolithic Berlin building. It is not completely clear yet what Howard does, but he is depicted as a drone. Early in the first episode he requests to be considered for a job in Strategy, and is coldly turned down. “You’ve been here thirty years,” the arrogant boyish boss says. “If it were going to happen it would have.”

Well, just hold up there, cowboy, because it is about to happen. Suddenly, Howard’s routine is upended when he is dragged off to a secret meeting with an emissary from The Other Side – himself. Howard Prime, a hardened field operative, brings an incomplete tale of an assassin from his side who is coming over here and killing people from the agency, as part of an attempted militant coup from his side. Suddenly, our Howard and his vulnerable wife Emily, who is in a coma, are at risk, and Howard has to be “read in” to the reality of another reality, with people who are us, but not just like us. 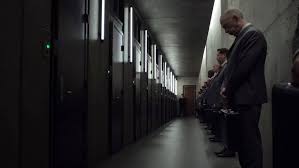 No, he’s not waiting for a toilet stall. Did I mention his job was boring?

There is a lot to like here. The biggest thing to like to J.K. Simmons, playing both a steadfast, nice, “beta” male and a decisive, ruthless rogue one. The cinematography  expertly evokes the Cold War (even though the story is supposedly set in our present). In modern-day Berlin, there is still a Checkpoint Charlie, and it still leads to the other side – it’s just that the Other Side is no longer the Eastern Bloc, it’s an entire dimension.

I like the sense of surrealism and paranoia that already swirls through episode one, especially when we find out that Howard Prime has already lied about something important on his side.

The acting is good to great. I love how the one establishing shot we see of Howard Prime’s Berlin gives the sense of great changes while capturing the same city, and I love how the game of go is used as a theme throughout.

In Episode One, there is a sense that Howard and Howard Prime both think – and seem to agree—that they are the same person, which means they share traits even if they are not exercising those traits. We see this when Howard Prime, imitating Howard in Emily’s hospital room, confronts the unlikeable brother-in-law. More importantly, we see it again at the very end, when Howard points out to his boss that they need him… and he’d really like that promotion to Strategy. Just because nice Howard hasn’t been ruthless doesn’t mean he can’t be. Clearly part of the story here is the good old-fashioned, “What makes us a person?” For instance, when Howard is playing go with his café partner, he ruminates that every decision we make in our lives creates our personality (clearly he is thinking of Howard Prime). His opponent says that’s nonsense, that we are the people we are without our decisions. I think that will be debated in action over the course of the show.

Counterpart rings a lot of bells. There isn’t really new ground in the double/clone/road-not-taken plotline. I was reminded, pleasantly, of China Mieville’s The City and the City although Mieville’s take is original. I was also reminded of Fringe, and spouse said, “This’ll sound weird, but I’m thinking of the original show The Prisoner.” In the sense that a man is expected to provide information when he never knows what’s going on, that’s pretty appropriate too.

The show is violent; it’s a spy thriller, after all. It’s a premium channel, so there is a lot of rough language, and I think we’ll see polite, steadfast Howard begin dropping f-bombs after a while (Prime already can’t get out a sentence without one, almost.)

There are a few things I don’t like. Putting Howard’s wife in a coma looks, at first glance, like the storytelling trait called “fridging.” This term, which comes from superhero comics and the website called Women in Refrigerators, means killing off or injuring the wife/girlfriend/partner so that the male character’s quest for vengeance will be seen sympathetically by the audience. I am warily giving Counterpart a pass here, so far, because there are clues in the story that Emily’s “accident” is related not to her relationship with Howard but to her own work for the agency.

I do not love the showrunner’s decision to casually call the cold, decisive, murderous field operative Howard “Howard Prime,” as if he comes first. On one hand, I do like that our dimension is not the “prime” one (although the other side is called “The Other Side”). On the other hand, rating the killer as automatically better than the caregiver offends me.

My biggest problem with Episode One comes with nothing in the episode itself. Starz always does a little afterword, behind-the-scenes thing, and in this case, showrunner Justin Marks went on and on about how special the scene with Howard talking to Howard was. Marks is apparently hoping that there is no overlap between his viewership and those of us who watched Orphan Black, who pioneered the camera work necessary to film an actor working with herself. A nod to the techniques championed by that groundbreaking show was required. If Marks and his whole crew were ignorant of Orphan Black, and somehow re-created the wheel, then he is incompetent and stupid. I think “arrogant” is more likely. It’s a bad mark against him. I won’t let it ruin my enjoyment in the show.

I’m waiting to see where Counterpart goes. So far, it offers up plenty to keep me watching.

UPDATE: I tweeted Justin Marks to ask if he used Orphan Black techniques in his show. He replied that they used some, “but we had to figure out our own.” Hmmm.

This entry was posted in Television Tuesday and tagged J.K. Simons, Other Dimensions, Spy Thrillers. Bookmark the permalink.