I parked my car downtown one day about a week ago. When I came back to it I saw a playing card by the rear passenger wheel. It was face down. I picked it up.

Well, I mean, of course I picked it up. I’ll pick up coins, single earrings, and unless they’re drenched in the viscous ichor of the tentacular, eldritch beings of the beyond (or something else nasty), I’ll pick up playing cards. I pick up paper and candy bar wrappers too, but those I just throw away.

I have mentioned in another post how superstitious I am, and a playing card that drifts into my path – or better yet, a random tarot card – will always spark my imagination.

This was a playing card: The ten of diamonds. 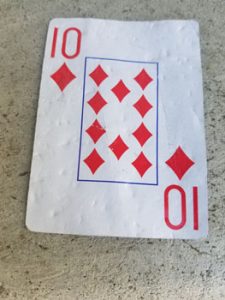 The Ten of diamonds, looking like it has been run over once or twice.

This translates to the minor arcana tarot card of the ten of pentacles. The playing cards do correspond:

The Ten of Pentacles (shown here from the Rider Waite deck) looks like a pretty good outcome. A happy family surrounded by coins. That looks good, doesn’t it? 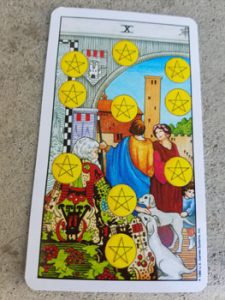 The Ten of Pentacles, to which the Ten of Diamonds corresponds.

Tens usually mean the culmination of a project or a cycle. Most of them are good. There is an exception; the Ten of Swords won’t make your day if it shows up in a spread or under the tire of your car. 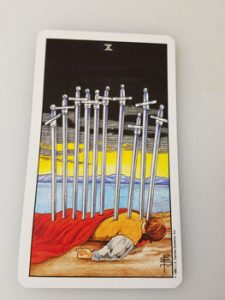 This card will have you side-eyeing your colleagues if it shows up in a spread.

The Ten of Pentacles, though, usually means material gain or riches. It can be called (this made me laugh) the retirement card; hard work, thrift and clever investments all paying off. It can mean the culmination of a project or an achievement, usually after a long hard trial.

It’s also the card of conservatism, which I choose to think means conservation, like husbandry and stewardship; conservative in the sense of “frugal”, although a couple of tarot books talk about being a valued member of an establishment and a person who plays by the rules.

The card can mean an inheritance. This will be interesting, because there is no one left for me to inherit from, but there is an ongoing situation in my life that involves a lump sum of money. It’s not mine, but I will touch it before passing it on. This card could be referring to that. (Now that I think about it, that’s the most likely interpretation for a random playing card I found next to my car.)

I’m going to ignore that and make it be about writing.

Writing has been as struggle for me lately. Actually, that’s not true. Writing has gone okay. Rejection has been a struggle for me lately. Everything I’ve sent out has flown right back, either with a form rejection or a personal, encouraging (still a) rejection. Meanwhile, over on Twitter, everybody in the entire world but me is published, has their story on a “Recommended” list, or is having a story reprinted somewhere. I know this is what Twitter is for, but as I kept reading this over the past few weeks, I was getting more and more discouraged. I was deciding there was no point in even submitting. What good is an encouraging rejection when they still didn’t buy the story? There just wasn’t any point.

Now I’ve decided, though, that the ten of diamonds near my car means that my hard writing work is going to pay off, and soon. (I refuse to define “soon.”) And that, ladies and gentlemen, is the way you do a one-card reading.

This entry was posted in Ruminations and tagged Rejection, Tarot, Ten of Diamonds, Twitter, Writing. Bookmark the permalink.