About twelve miles off Canada’s eastern shores (Newfoundland and Labrador) there are three islands that are still part of France. St Pierre, Miguelone and Langlade sit at the entrance to Fortune Bay. The islands are a French Territory.

As you might expect, the islands have bounced around somewhat in nationality, belonging to France, to England, and then, through the Treaty of Paris, to France again. During World War II they were part of the Vichy government and after that part of Free France. The official language is French, although according to a couple of travel articles, they are bombarded with Western Canadian tourists and students, so they tend to be more patient with non-French-speaking foreigners than the rest of France is. They have fine dining restaurants, bistros and some nightlife.

Probably the islands’ best economic period, though, was during the USA Prohibition period.

Canada had various temperance movements and various types of prohibition itself, mostly province by province. Certainly, during the 1920s it was illegal to ship alcohol to the USA. It was not illegal at all to ship it to France, which, conveniently, was about twelve miles away. Al Capone was apparently a frequent, and welcome, visitor to St Pierre and Miguelone. One article joked that every basement in every house on the islands was turned into keg storage, and while that is probably an exaggeration it may be only a slight one.

My great-aunt Ella lived with us when I was a child. She died at the age of 93, when I was fourteen. In her youth, she and her husband ran a hotel in Mattapoisett, Massachusetts. During the 1920s Uncle Frank (I never met him) made trips to Canada to “stretch his legs” about every two months, Ella said. He’d drive most of the way.

She did not go with him usually. Someone had to keep an eye on the hotel when Frank was gone. He would often get home late at night, Ella said, come into her room, because they had separate rooms, and leave a token on her bedside table, a small bottle of Canadian whisky. For the next several weeks, the hotel lounge would be quite popular.

She did go on some motorcar trips during this time period and later. Here she is with three women, probably in the 1940s or late 30s. There is no notation on the back of the photo. I’m looking at that saloon in which they are traveling, and even though it’s a later model than would have been around during Prohibition I think, I’m imaging how easy it would have been to tuck away a few forbidden bottles here and there. 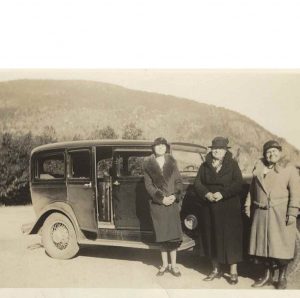 Ella is on the far right in the pale coat.

Ella never talked about this aspect of her marriage but my father and I both thought that Frank had a woman on the side up there in Canada, and furthermore, that if Ella knew about her, she didn’t care very much.

I wonder if Frank made the occasional short trip to France while he was “stretching his legs” in Canada. I don’t think he was a dedicated rum-runner. I think he was a hotelier with a commitment to good customer service. And if he was able to sell a few other merchants in Mattapoisett some liquor along the way, well, it’s good to get along, isn’t it?

An aside; motorcar travel was high-risk in the 1920s, as you can see here. And are they standing on train tracks?

This entire rambling blog post exists because I think having France in such close proximity during Prohibition is a great tidbit for fantasy world-building. Everyone is writing about Prohibition right now. (Actually, everyone wrote about Prohibition two years ago and it is getting published now.) Still, with the states decriminalizing marijuana and the feds refusing to accept those laws, Prohibition is a good fictional model for certain things that are happening now. Imagine a rum-running hotel owner and his wife (perhaps magical?) … and three French islands off the coast of Canada. 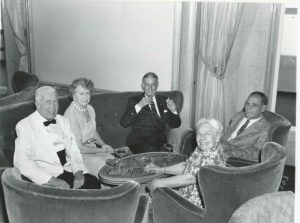 Much later in her life, Ella (front right) on a Holland America cruise ship.

This entry was posted in Ruminations and tagged Canada, France, Mattepoisett, Prohibition, Rum-runners. Bookmark the permalink.