Welcome to Television Tuesday; the Wednesday edition. I got behind on blogging this week.

Falling Water returned for a second season, airing Saturdays at 10:00 pm on USA. It’s also available On Demand. I was pleasantly surprised the show got renewed. The second season does not have quite the same level of artistic production values as Season One, and it seems to be playing it safer. It also borrowed some horror tropes in the early episodes, which adds to a general feeling of a loss of confidence in the material. 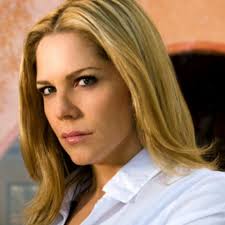 Mary McCormack joins the cast as Taylor Bennett. I don’t think we want to mess with her.

Still, our three principle players, Lizzie Brochere, David Ajala and Will Yun Lee, continue to deliver compelling, layered performances, and this season has added Mary McCormack, and that was a stroke of brilliance.

When Season One ended, Burton (Ajala) had information that would cripple the brokerage firm that was trafficking dreamers, the mysterious Icelandic billionaire Bill Boerd had slipped away, and  Tess (Brochere) was driving out of the city with her son James at her side. Taka (Lee) and Tess’s sister Sabine were tentatively healing their relationship. I know some stuff happened with the Green Tennis Shoe folks (I like to call them the Green Tennies) but I don’t remember what.

Alex. “Are you kidding me right now?”

As Season Two opens, Tess and James are living in Connecticut under assumed names. Burton’s legal assault on the brokerage firm has faltered as they circle the wagons. Taka has a new partner, a passionate straight-arrow named Alex who tells him early on that “she knew all the stories about him, but she thought she could work with him.” Things with Sabine take a terrible turn right about Episode Two I think, and it’s hard to see how our dreamers will be able to make things right.

The scary new element is the Shadowman, introduced to us by James, who sees him in his dreams, and in a gruesome and inexplicable murder Taka and Alex investigate. The Shadowman is Freddy Kruger with Cockroaches. I don’t think this was the best choice for the show, although now we are beginning to see the waking persona of this character and it’s getting slightly better. I never watched Falling Water for the gore, though, I watched it for the weirdness, and this season is hewing pretty close to literal and linear.

There is still lots to love. Mary McCormack adds a rich layer of suspense and danger, even when the show’s direction of her character isn’t helping her. Alex fully emerges as a character, not just a contrarian, as the season continues. James is now a living breathing boy, and the show wrestles with a common TV problem; you got the kid back (yaay!) and now you have a kid – in a good way. It’s tempting to send James off to his room every time the show needs to deliver exposition and so on… and, to be fair, they do that a lot. But James is not just a boy who has only met his mother in waking life six months ago, he is a dreamer, and probably the most powerful one of all of them. The show has taken the time to have one or two negotiations with him, when he’s wanted to tag along on an adventure that was going to involve chase scenes and guns. Tess desperately wants to keep him safe, but she also needs his abilities. They are walking this tightrope well, so far.

I love Boerd’s futuristic dream-couches with the tube lighting accents. I want one – not for dreaming, just for the family room.

Who wouldn’t want a slipper couch?

Woody (Kai Lennox), who works for the firm, is a trickster, a shades-of-gray character, who, in a recent episode, took a stand. We’re proud of him for it; we’re worried about him. Clearly, he has endangered himself.

The show has eliminated all of its beautiful water imagery except for an obligatory falling-backward-into-a-pool scene each time one our dreams enters another person’s dreams. It’s unnecessary and a little insulting.

Taka: “I have a bad feeling about my relationship.”

This season has added an additional danger for Tess in the form of a follower/stalker who looks like he might be from the Green Tennies group, although we haven’t seen him for a while. Burton finally met the Woman in Red in real life. Her story may be resolved… but I hope not. And they’ve introduced a new dreamer, a woman whose experience mirrors Tess’s in terrifying ways.

I’m happy it’s back and I’m watching it faithfully… I’m not confident there will be a Season Three, but a girl can dream.