I named this “Auburn in Winter” but it is mostly about Nevada City, where, last week, Sharon and I spent a day window shopping and taking pictures.

If you are headed for Reno or the snow, and need a stopover, the Best Western Golden Key Hotel in Auburn is an excellent place. It’s not a Victorianesque B&B, just a good hotel with clean, comfortable rooms, nice amenities including a varied breakfast buffet, and helpful, cheerful, friendly staff. From highway 80 northbound, take exit 121, turn left on Lincoln Way. It’s on your right. 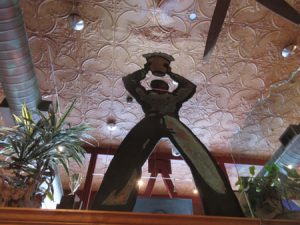 Inside the Alehouse this figure greets you. The week we were there it wore gold Olympic medals.

Tuesday evening/late afternoon, Sharon and I had dinner at the Auburn Alehouse Brewery and Restaurant. Our server, Jessica, made the meal a delight. Sharon had the Mayan martini; vodka, jalapeno, elderflower liqueur and cucumber. I had a sip. The kick of the jalapeno cuts the floral quality of the elderflower, and the cucumber makes it refreshing.

She had the fish and chips and I had the fried chicken. It’s marinated in a buttermilk marinade, so the two large breast pieces they served were moist and tender, and the batter was crisp, loaded with spices and flavor. I took one whole piece of chicken back to the hotel. The chicken came with sautéed vegetables and mashed potatoes. 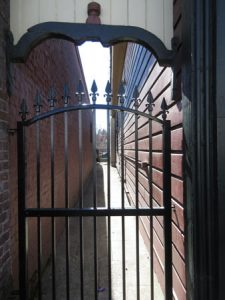 An elaborate gate… to the past? Or maybe just an alley.

Wednesday we went to Nevada City. The sky was blue enough to hurt, and we could see all the way east to the radiant snow-drenched foothills. Many shops in Nevada City close Tuesday and Wednesday, but several of them had pen and paper signs on the door that they would be closed Thursday too, and I assumed this was because of the snow they were expecting.

Fancy door handles on the building that houses several shops…

Nevada City hugs the hills at about 2500 feet. It is the county seat of Nevada County, with a population of about 3,000 people according to the last census. It was settled by immigrants (white people) starting in 1849, the gold rush.

The town has a number of import shops and gift shops; at least three chocolatiers including See’s Candy; an herbal shop; several galleries, and at least two bookstores. We stopped at Toad Hall Used Books first where I found some excellent Jon McPhee books. While we were browsing a woman came in asking for A Wrinkle in Time. The woman behind the counter said they didn’t have it, but recommended Harmony Books, which is down by the river in the old assay building. 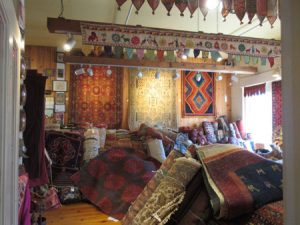 …including this carpet and import shop.

The gold rush era buildings are largely stone or brick. Floors can be uneven. Like Grass Valley, the town has a new-agey vibe with crystal shops and gift stores that sell mood rings and meditation aids, and quite a few young people of color, which seems odd to me until I pause and think that this is part of the new age thing. And lots of dogs on leads, most of whom are friendly.

Sharon and I went to Harmony Books, where I found Josh Weil’s latest story collection. The door opened and a woman walked up to the counter and said, “I called a little while ago, about A Wrinkle in Time.” The counter worker said, “Yep, I have it right here.” It was the same woman, searching out the book for her grandson. She wants him to read the book before he sees the movie. 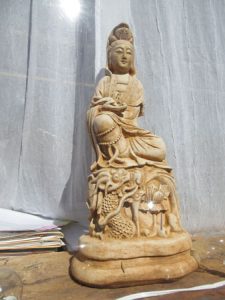 Quan Yin. The Chinese influence is clear in the gold rush towns. 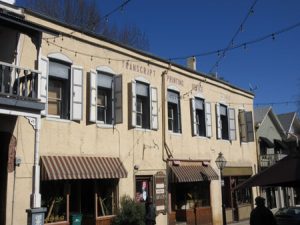 The Transcript Printing Building. I guess they printed transcripts here.

Walking back, we stopped at the botanica, where the woman behind the counter was getting ready to provide a lesson to a group of first-graders. I wanted to tag along! She took them outside to talk about some of the herbs that she had cultivated along the border, and then they were going to make a salve. I was envious.

I brought my small Canon camera, not the T3i. While it was a beautiful clear day, and comfortable in the sun, the time of day meant it was the worst time for photos, and that certainly shows. Also, the little point-and-shoot doesn’t have a view-finder (a view-finder! How old-fashioned!) so I wasn’t able to frame the photos as well as I would have liked. Still, these might be of some interest. 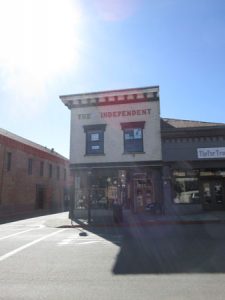 Office of the Independent. Oh, for the old days of local dailies with cantankerous editors.

We headed back toward Lincoln Thursday morning. I asked at the front desk if it was snowing in Nevada city, and she said yes, they’d heard it had already started.

We made a detour through Newcastle, where I bought snacks at Newcastle Produce. Sharon recommended them; they have a wonderful deli and I picked up a jar of anchovies for Spouse.

This entry was posted in View from the Road and tagged Auburn, California, Gold Rush, Nevada City. Bookmark the permalink.