Eating My Way Through FOGCon

Part of the pleasure of a speculative fiction convention, along with panels and readings, is sitting down with longtime friends and new ones in a bar, a cafe or a restaurant. My title makes it sound like I was a human vacuum-cleaner who spent three days hoovering up snacks, and that isn’t accurate, but I had some good meals with good company.

The Walnut Creek Marriott is the venue for FOGCon and has been for several years. The hotel is a good partner; it takes care of problems quickly, it offers a good convention rate, and the convention rooms are nice. It has a great bar. It has an adequate restaurant, the Atrio, that excels at breakfast, including a breakfast buffet which looks good. I’ve never actually tried it because I can pay less for a good breakfast ordering off the menu. Last year, though, my final day there, I watched as a Utah-based high school baseball team who was in for a regional game got their money’s worth from the buffet.

That said, I did have dinner there the first night. The service, which is geologically slow, was much better on Thursday night when there were fewer guests. Since a hamburger is something I rarely make at home and something I like, it is often the first thing I order when I’m on a trip. The Atrio has a cheeseburger on the menu that sounds like it would be juicy and tasty and oozing with tangy cheese, balanced by slightly acidic tomatoes and providing general yummy goodness. This is a testament to the Marriott chain’s food writers. I ordered the burger medium rare, but I consider what I got to be medium well. There was no pink, and the meat was dry. The tomato was fine given the time of year, but the bulk of the burger was a slab of iceberg lettuce. I ended up pulling it out of the burger and eating it like salad. The cheddar cheese lacked flavor, although it was  perfectly melted and added a velvety texture and moisture that was lacking in the meat.

On the other hand, the fries were delicious. I had their version of a Moscow mule with my meal, and it was very good.

A group of us had planned to go out on Friday night. The composition of the group 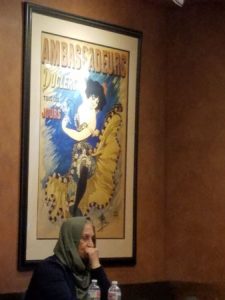 changed somewhat because of schedule conflicts, but ultimately five of us went to Caffee LaScala, on North Main. La Scala is sort of an upscale student hangout offering salads, paninis, soups and specials, coffee drinks and scrumptous desserts. I have whined many times on this blog about my goal to reduce the number of sugary coffee drinks I have, and Friday was a day I was letting myself have one. I ordered a mocha and La Scala did not disappoint. I had a canoli with it. The pastry cream filling was accented with candied orange peel that gave a great pop of flavor, and contrasted beautifully with the dark chocolate inside the roll. The pastry itself was a little tough. I chose a Caesar salad for my entree and I was delighted. The romaine was crunchy and fresh and the dressing had just enough tang. I didn’t pay good attention to entrees but I did notice that Laura Davey had my fantasy-choice, a brie panini. Next time I go there… I did notice the desserts; Terry had a Napoleon because she is practicing for her upcoming trip to Paris; Laura Blackwell had a dessert that looked like a cross between New York cheesecake and a parfait, since the top was covered with macerated berries. Garrett had chocolate cream puffs (next time I go there…).

At LaScala you order at the counter and they bring your food to your table. We had a longish wait, but we didn’t really care. We had just beaten the rush, and as we waited for our order we watched the order line stretch, snaking through the place.

LaScala has a tiny kitchen, making their output even more miraculous.

There are two good eateries within short walking distance of the hotel. They are both in the same strip mall on Parkside. Because we thought it might rain, on Saturday several of us took the hotel’s shuttle to Kinder’s deli for lunch. They specialize in meat, and excel at sandwiches. This place was packed, and while they have an efficient assembly-line approach to sandwich making, they obviously had a trainee on the line the day we were there. I can report on my turkey sandwich on marbled rye: the bread was fresh, soft and tasty; the turkey was moist and the condiments were not overdone. It was hefty enough that I ate only half of it. Beth had a stuffed twice-baked potato, and next year when I go back that’s the thing I want to try from Kinder’s menu. We talked about the panels, books and Terry’s upcoming trip to France.

Sunday I went to the same mall with fellow panelist Bradford Lyau. We walked. it took about ten minutes to reach Shanghai Gourmet. The restaurant offers tasty food served family style, some dim sum, and a vast menu. Brad is a historian who taught at the professor level; he is an entrepreneur and a political consultant who worked on the HR Clinton campaign in Nevada (Clinton took Nevada).  Brad’s scholarship centered around speculative fiction through history, with an emphasis on Jules Verne and H.G. Wells. Lunch was great and we saw many people from the convention there. 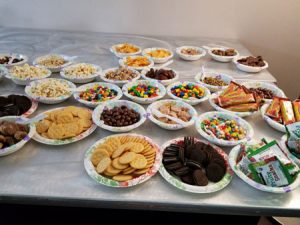 I had one other food-related activity at the Con. Friday morning I helped set up the Con-suite. I have now established that I have a secondary, perhaps marketable skill — I can pour snacks into bowls with a minimum degree of spillage. I am pleased to report that while I only ate one chip, I created this artistic array of sweet, salty, savory, chocolately, fruity and healthy snack.