WARNING: One instance of foul language.

I went on the Prohibition-era tour of Seattle my last night in town. Private Eye Tours offers ghost tours, true crime tours and the “Booze, Broads and Jazz” tour. These are all vehicle tours, which was new to me. In the case of the Prohibition-era one, many of the sites we visited no longer house the buildings that were infamous in the 1920s and 30s, or they are repurposed, so there wouldn’t be a walking tour in any event.

Besides being just what I needed, the tour was fun.

Neighborhoods like this one, in Pioneer Square, had some racy clubs.

The white van pulled up in front of the Executive Pacific a few minutes after 6:30 and an older gentleman in semi-formal clothing got out and came around to open the door for me. In the front seat was a woman several years younger than him. She wore a shiny blue dress with a corsage, and a small hat. I wondered if they were a couple and it was a special occasion for them.

In the first set of passenger seats were Margee (pronounced with a  hard “g”) and Dave, two Seattle school teachers who’d decided to take the tour as a fun thing to do on a Saturday night. We drove north and east toward the South Lake Washington district, which is undergoing renovation thanks to a couple of tech firms… I want to say Netflix. Somewhere up there we picked up our fourth, Tanya, a dark-skinned twenty-something woman who runs a Nike store in Brooklyn and is out at the Nike HQ in Beaverton, Oregon, for a four-month special assignment. Tanya was having city-withdrawal in Podunk Beaverton (my term, not hers) and took the bus to Seattle to get a bigger-city fix. She was having a pretty good time. We compared notes on the Underground tour and the Space Needle.

The woman riding shotgun, with the corsage and the hat, was Jake, our guide, in her character as a 1930s/1940s party girl in the wild city of Seattle. And then we were off! 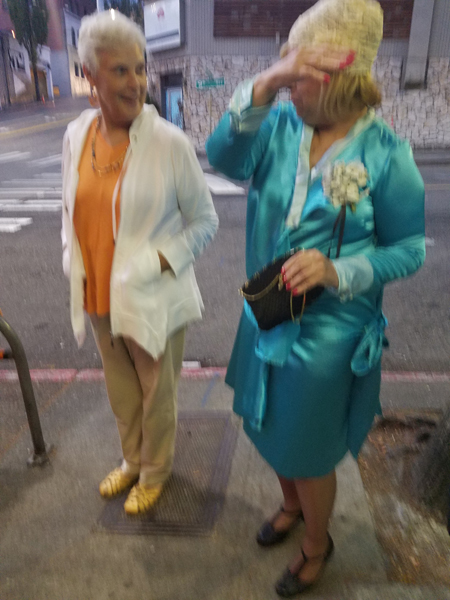 Margee (l) and “Party-girl Jake.” I’m so sad that this is blurry.

Much of the tour took place in neighborhoods that are now called Chinatown and the International District; centered about S Jackson and 12th Streets. Washington close to go “dry” in 1916, three years before the rest of the country. This meant their bootleggers and speakeasy proprietors had three years longer to learn their trade and get their systems in place. Jake chatted knowledgeably about Chief Roy Olmstead, the town’s premiere bootlegger. She opines that the absence of organized crime, specifically the Italian mafia, from the Seattle prohibition scene, was because local law enforcement was so well paid-off and so thoroughly entangled in the business.

Party-girl Jake also believes that Olmstead’s wife, AKA “Aunt Vivian,” who read bedtime stories over the radio from the top of the Smith Tower, really did give out coded coordinates to smugglers, “Mostly on nights when the fog was in.” 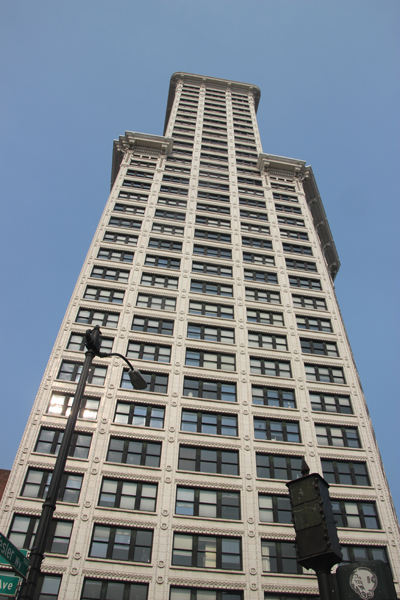 (Rough language!) There were several gay clubs and transvestite clubs south of Yesler Way, and Jake took us past a couple of them. Talullah Bankhead visited one of the transvestite clubs, delighting the cross-dressing audience by shouting, “Avon calling, you beautiful motherfuckers!”

Dave expressed surprise that things were “so open” in the 1930s. Jake gently corrected him. People “in the know” knew about these clubs, but they weren’t common public knowledge. They might have been (semi) safe places inside, but it wasn’t safe to be gay, by any means.

The outer perimeter of Pioneer Square housed several delightfully dodgy establishments, like Madame Peabody’s Dance Academy. It wasn’t a school of dance; the place provided vaudeville/burlesque style performances, and for an additional fee, a patron could rent an hour in one of the cubicles with one of the girls. The name of this kind of place was a “box house,” which was a new one to me. 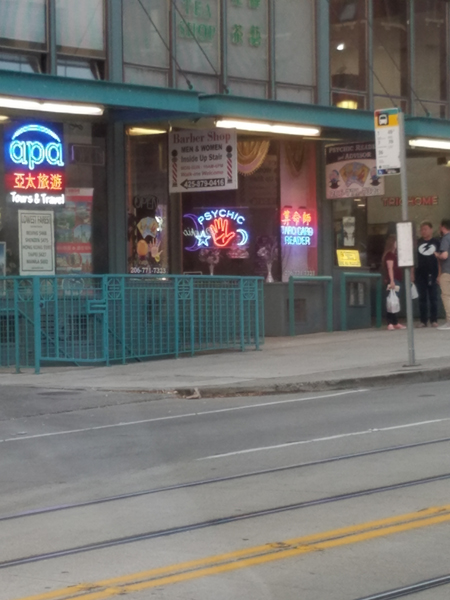 Street Scene. It’s hard to see but the sign for card reading is spelled “Taro.”

At University and 1st Street, almost to the waterfront, the Garden of Allah, held in the basement of the Arlington Hotel, was a transvestite club with cross-dressers who achieved mainstream celebrity in Seattle.  Jake showed us photos. If she hadn’t told us they were female impersonators I would not have assumed they were men.

Then we headed east toward 12th Street, passing the former Milwaukee Hotel. The Milwaukee Hotel was founded by Chinese immigrant Goon Dip, a pacific northwest success story. The official story of Goon Dip says he landed in either San Francisco or Portland before 1882 (good timing on his part since Chinese immigration was declared illegal after 1882). He started a thriving and successful business in Portland, and then moved to Seattle, where his father-in-law had businesses. Goon Dip made a small fortune in Seattle by recruiting Chinese men to work in the Alaskan fish canneries, but he gambled, and won, by planning for the upcoming Alaska Yukon-Pacific Exposition, scheduled for 1909. Goon Dip built the Milwaukee Hotel and greatly benefitted from the influx of tourism.

The official story of Goon Dip calls him a “visionary, wealthy entrepreneur, public servant, philanthropist…” and the most influential Chinese voice in the pacific northwest for his time. I think all that’s true. It’s also true inside the Milwaukee Hotel Goon Dip had a bar, two casinos, one for Chinese and one for European-Americans, and a brothel. The hotels and “social clubs” in Chinatown constructed tunnels that led to neighboring buildings, so people could flee in case of a raid. Of course, the vice cops were welcome and frequent visitors to the speakeasies and casinos, and the owners were usually tipped off in advance to a visit from the “dry agents” or anti-booze brigade.

Jake said that the police graft was so institutionalized and so rich that beat cops competed for a chance to get a Chinatown posting so they could rake in those extra bucks.

It was outside of my timeframe, but the music of “south of Yesler” was fascinating. Jazz was super-popular, and known names in jazz and blues played the clubs regularly. There were several African-American owned hotels, because acts would come in to play the ritzy white clubs, but black performers were not allowed to stay in those hotels. Ray Charles was a regular, and one of his early blues songs, “The Rocking Chair Blues” was about a club called the Rocking Chair.

When Prohibition was repealed, Washington maintained strong laws restricting the consumption and sale of alcohol. They frequently could get a club declared a “public menace” and shut it down, with little or no evidence. It’s a strange standard.

“Jake’s” party-girl persona worked perfectly, but I was stunned at how much research she’d done. Jake had photographs she passed around and period music (including “Rocking Chair Blues”) that she played at key points during the tour. She read us quotes from various contemporary reports of raids and indictments. At the very end, when they took us to Vino’s, a 50’s-era bar that probably was one of the rare Mafia owned establishments, Tanya asked her about how she set up the tour, and she laughed and said she probably read “every single newspaper on microfilm” from the 30s and 40s. 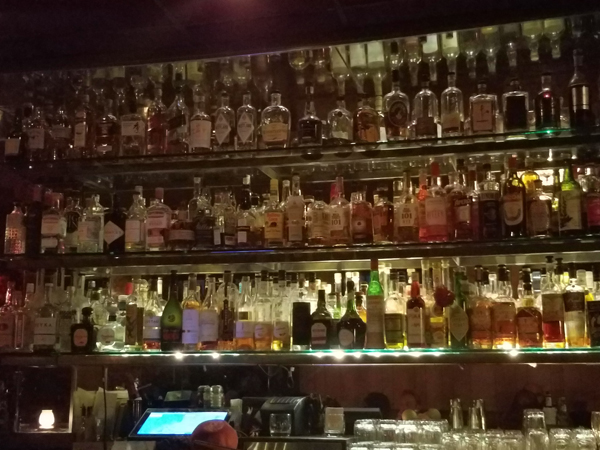 I also enjoyed the time spent with my tour-mates. Margee and Dave have two years to go until the retire (Margee flashed ttwo fingers in a aV and nearly shouted, “Two! Two years!” I think she’s looking forward to it,) and I could have listened to Tanya talk about New York, and Nike for another hour. It was time to head back to the hotel though, before I turned into a pumpkin.

This entry was posted in View from the Road and tagged Guided Tours, Jazz, Nike, Prohibition, Seattle. Bookmark the permalink.