I got this fiery, geometric woven wall-hanging at the Sebastopol farmers’ market 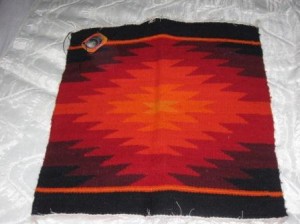 Sunday.  The  booth is called “Sacred Land.”  I hadn’t seen Sacred Land before; maybe I just missed it since I have such a predictable routine at the market.  The woman who was managing the booth said she was doing it for her daughter, who runs the business from Ecuador.  It’s a fair-trade operation; they interact with the weavers and give back most of the profit.  In addition to hangings like this, which is about the size of a placemat, they have larger swathes of fabric, both woven wool and ikat cloth, shawl or table-cloth sized, some nice over-the-shoulder bags, jewelry and paintings done by her daughter’s partner.  They also have pieces the size of the standing figure (below).  I wanted to capture the way the sun shone through it, but didn’t quite get it.  Anyway, the stuff is beautiful and not badly priced. Apparently they don’t have a website, but Mom gave me her daughter’s e-mail because I wanted to ask her the name of the weaver of the piece I bought.  (The e-mail is sacredland.arte@gmail.com) 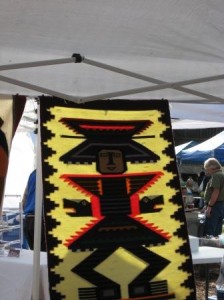 lso had a nice talk with the guy who runs Sonoma Chocolatiers, which I hope will fill the gaping void left in my life when La Dolce V closed (please, a moment of silence).  He now owns Infusions Tea Shop in Sebastopol, and a lot of his truffles have tea-flavored fillings, but he also does chipotle chili filling and a couple other pepper fillings.  I found the smokiness of the chipotle to be a poor combination with the chocolate; the aji chili and cinnamon was a better match in my opinion.

Two weeks ago I made a family-traditional winter meal, pot roast, completely from farmers’ market purchases.  The meal wasn’t perfect because I forgot to get salad stuff, but it wasn’t bad.  I bought a 1.5 pound chuck roast from Black Sheep Farms (even though Brock is on my black sheep list at the moment because, despite all his promises, he hasn’t had bacon at the market since August.  Tomatoes won’t be here forever, Brock!)  I got garlic and onions from Nancy at Middleton Farms.  Nancy has the best onions and garlic in the market.  She usually has the best strawberries too.  The organic carrots came from Laguna Farms.  I went to booth for Nelson Farm from Tomales, who have many varieties of potato, and asked which would be the best in pot roast.  The vendor recommended two; yellow Finns and German Butterball potatoes.  I put two of each in with the roast.  They were great, sopping up the juice but still retaining potato flavor, tender while keeping their shape.  Oh, I also grabbed a couple of bunches of herbs from Middleton Farms as well.

Two of my favorite vendors were not represented in this meal. One was Javier of Bodega Goat Farms, who sells goat cheese.  If you don’t already like goat cheese I’m not going to say, “Oh, try his and you’ll change your mind.”  You won’t.  His cheese tastes like goat cheese.  If you like goat cheese, I recommend the flavored spreads.  Our favorite is the basil; second favorite is the Serrano chili.  Hector’s Honey has the best honey in the county and I’m not the only one who thinks so.  He won first place at the Harvest Fair this year.  Hector has a farm in the Fulton area and sells beeswax candles, peppers, tomatoes and tomatillos as well as honey.  If you get to the market really early, and are lucky, you may be able to score a 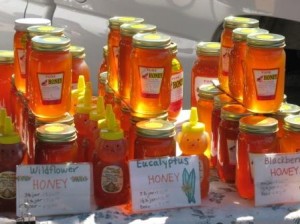 dozen organic, actual free-range chicken eggs from him. He doesn’t always have eggs, though, and they go quickly.  In fact, I think some people call ahead and reserve them.

You can’t get chicken at the market, but some Sundays you can get fish.  You can get coffee beans, artisan breads, gourmet chocolate, handspun wool yarn and decadent baked goods.  Often there is live music.  The booths around the gazebo tend to be the arts and crafts; hemp clothing, pottery, hand-woven baskets, and Christmas presents from fair-trade operations based in Ecuador, with a booth run by Mom.

This entry was posted in View from the Road and tagged chocolate, Ecuador, fair trade, farmers market, weaving. Bookmark the permalink.