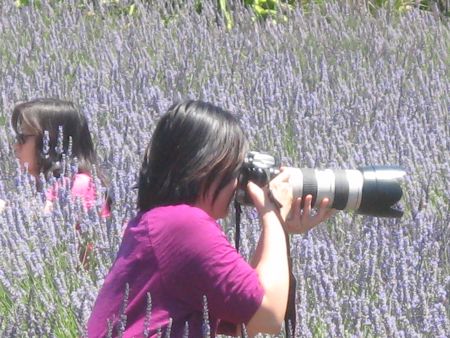 This time of year I can go to a festival of some kind every week.  Let’s see if I can name five without thinking too hard: Jazz Festival, Garden Festival, Fisherman’s Festival, Mustard Festival (in a neighboring county, but still,) Roma Fest, and the Lavender Festival, and that isn’t counting the ones that are Fairs.

This weekend I went to the Lavender Festival.  I went primarily because the fund-raiser portion supported Voicing Our Independent Choices for Emancipation Support (VOICES); a great non-profit project founded by and working for former foster youth who are transitioning into adulthood.  Eight wineries and five eateries donated their time and imaginations.  The wine was traditional Sonoma Valley best and the food was inspired by lavender. 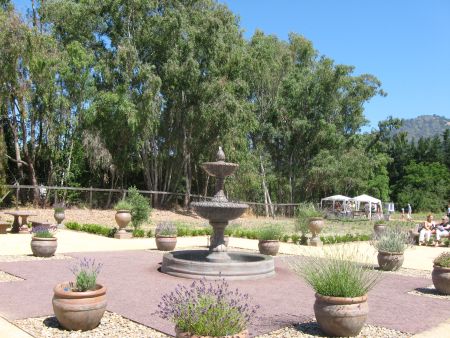 The Festival is held at Sonoma Lavender, a lavender wholesale company that also makes lavender scented spa items and some culinary products.  They sell culinary lavender to stores like Andronico’s in Berkelely.  Their lavender farm is nestled in the valley at the feet of Mount Hood, next to Chateau St Jean, embraced by the winery’s vineyards, sheltered by valley oaks.  They have a lavender barn that is painted lavender (the upstairs is their drying room) and a house surrounded by a beautiful landscaped garden. . .  and then there are acres of lavender.

In addition to the food and wine-tasting there was a guided tour of the lavender plantation and the new specimen garden.  Gary, one of the owners, was our tour guide.  We started at the formal specimen garden with its varieties of lavender planted in pots, the musical fountain at its center.  Gary informed us that there were 500 cultivars of lavender worldwide.  This is because lavender grown from seed mutates successfully about 1% of the time; usually this means a change in color of the flower.  There is white lavender, pink lavender and he said a woman told him recently she had grown chartreuse lavender.  Since lavender is grown mostly from cuttings, these mutations are instantly “cloned;” which is why there can be 500.  Sonoma Lavender has about 32 varieties. 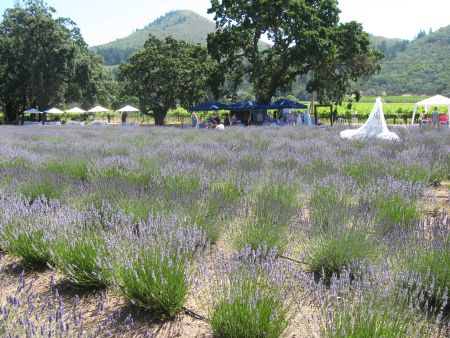 Their three biggest for production are Provence lavender, grosso lavender (dark bluish in color with a larger bloom than Provence) and Hitcoat Giant, developed for its long bloom and high volume of oil.  Lavender essential oils are used primarily in perfumes, he said, even if you don’t notice the scent.

They harvest the flowers early in the morning.  During the day, bees and sunlight extract about 40% of the volatile oils from the plant, but these replenish during the night, so the best hours to harvest are from about six am until nine.  From the long undulating rows of blue flowers in which we stood, Gary said his harvesters would get about 4,000 bunches of flowers for drying.

He also showed us how to take cuttings for planting, but I left the group before I could learn how to prune a bush back at the end of the season.  I realized later that my plants had taken a major beating during our long wet season, so the pruning thing would have been helpful. 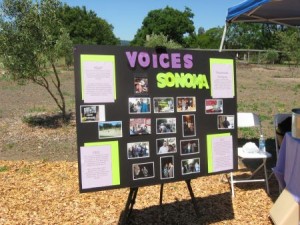 I left the tour before that, though, and went to talk to Alissa Gentile, who works for VOICES.  She was taking tickets but we managed to chat for a few minutes.  I went to the VOICES booth and talked to the two young people who were staffing it at that moment.  Poised, friendly, knowledgeable; kids who came through some tough times and are developing into the kind of adults and citizens we want everyone to be.  Then I went to check out the food.  I had wine-tasting tickets—part of the cost of the fund-raiser—but it was barely noon, and I was driving by myself, so it didn’t seem too practical.  (Driving out, I had seen hand-lettered signs on posts along the way saying, “Hire a designated driver!” with a local phone number.  Some enterprising person giving the limo companies a run.  Wish I’d hired them.)  Eating?  Well, that was no problem! 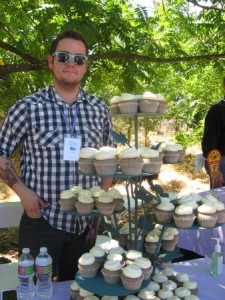 I had dessert first.  Sift, a local cupcake bakery, had vanilla and lavender cupcakes with honey buttercream frosting.  The cupcake was an oatmeal color instead of white, yellow or brown; not necessarily the most attractive color, but the pillow of frosting looked like a cloud.  The cake wasn’t too sweet, which was good, because the frosting. . .  just about a perfect mix of flavors.  Cupcakes are usually either too rich for me, or not satisfying enough.  This one was exactly right.  I followed it with a crostini from Jackson’s Bar and Oven.  Lavender, goat cheese and strawberries.  Just when it seemed like this might be really too sweet, the earthy goat cheese would mellow it out.

Thai Sea Bistro had lettuce cups.  I didn’t have one but they looked delicious; silver noodles, a little bit of chicken, I think, vegetables and Thai spices wrapped in a lettuce leaf.  Very refreshing.  I tried Syrah’s cold carrot and lavender soup.  It had the obligatory dab of crème fraiche on the top.  Quite good, but the lavender was barely an aftertaste.  Not complaining, just saying.

I brought water, and that was a good thing, although they did have lavender lemonade at the other end of the field.  I walked back up there and went through the lavender marketplace to pick up some souvenirs.  Then I went out to where the bee hives are—bees are not needed for propagation but they also sell lavender honey—and bought some honey and two plants to add to my lavender border.

The event had quite a good turnout and it continues on Sunday, except for VOICES fundraiser. Here are some other lavender facts Gary shared with us:

This entry was posted in View from the Road and tagged foster youth, Jackson's, Lavender Festival, On the Move, Sea Thai Bistro, Sift, Sonoma Lavender, Syrah, VOICES. Bookmark the permalink.

4 Responses to A Lavender Sea