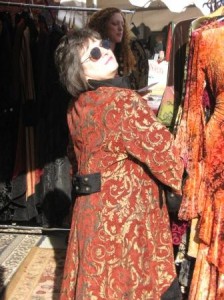 We’ve had Thanksgiving at Buzz’s and Sharon’s for at least the last 25 years.  The day after the big eating day, Sharon and I would go the crafts fair at the Mother Lode Fairgrounds in Sonora, while the men stayed home, drank beer, and watched college football.  Our tradition probably started about 20 years ago, when Sharon read about the fair and we decided to try it out.  Her daughter Renee went with us a few times, but most recently and frequently Sharon’s aunt Dini has made up the third in our trio of female fair-goers.

The fair has a Celtic theme.  In the early years there would be kilted minstrels and pipers at the approach as you drove up.  I haven’t seen that the past six or seven years.  The music is countrified, as befits Sonora, Queen of the Southern Mines, a town of 4,400 tucked into the Sierra foothills.  The Golden Bough, unabashedly Celtic, always play at the fair, while other musical acts were more cowboy-ish, like Sourdough Slim.  The steel drummers weren’t there this year and I missed them.  The roving carolers strolled through the crowds on s

chedule, however.  Some things you can count on.

The main purpose of crafts fairs, though, is crafts.  Nineteen years ago I bought a clock at the fair.  It is a grinning crescent moon with some stars, laminated onto plywood, very simple, and it has now hung on my wall in five different offices.  Potters, jewelers, weavers, painters, photographers from as far north as Colville, Washington and as far south as Los Angeles have their wares on display. One year I bought a lavender cowboy hat from the hat booth (that’s the lady in the blue coat).  It’s a great hat!  And it keeps rain off my glasses.

This year’s exciting new booth, for us, was the girl with the painted light bulbs.  She was a slender thing with a glittery top hat, a consummate seller.  When she was a teenager she wanted to paint a mural on her wall.  Her parents said no.  She decided to paint the light bulb instead, figuring the images would show on the walls (which they do).  She painted her first bulb with nail polish, and it exploded.   “And I got in trouble,” she said. She ended up licensing her own type of heat-resistant paint. Instant lightshow! Trippy! They are by definition disposable gifts since eventually the bulbs burn out, but that’s life, right?

You can also buy foodstuffs; vinegars, honey, dip mixes, flavored nuts.  You can buy fancy scented candles, woven baskets, aprons, oven mitts, placemats, napkins; you can buy clever gifts for your dog or cat; you can buy wind chimes made of old flatware and depression glass. You can buy expensive clothing, like the $900 brocaded coat Dini tried on.  This booth, Samiah, also has clingy cut velvet gowns and blouses, brocaded jackets, and tote bags.  I talked to the vendor and asked what her influences were.  She said she kind of sidled into the fantasy realm.  She doesn’t have a history or art history background, but she started making this kind of stuff because it appealed to her, and the Renaissance Faire types picked up on it.  I saw her two weekends later at the Goddess Festival in Sebastopol, which seemed like a perfect match for her clothes, except for the price.  (She does do layaway).  I think she had the most expensive clothing booth at the fair.

The other cool new thing at the fair was the guy selling the “Bed Desk.”  Yeah, I know, 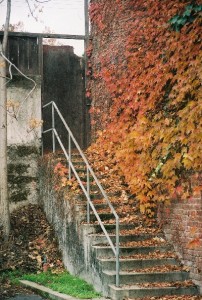 I know. . . but the engineering on his Bed Desk is fascinating.  It telescopes open and closed, and the legs are a little longer than usual.  It has hinges everywhere.  It’s this cool wooden toy you can pretend has a useful purpose. He has designed it so you can set a laptop, paperback, or hardcover book on it, or fasten sheet music to it.  Dini and I were fiddling with them and he said, “I can totally customize them, if someone’s small or left-handed.”  I’m like, well, anyone can see that Dini is short, but how could he tell I was left-handed?  Dini bought one.  I would have, because I’m such a sucker for a good sales person, but I was too lazy to lug it around for another hour.

The only thing we never did at the fair was eat.  The food was fair-predictable—funnel cakes, gyros, Chinese and Indian food, barbecue.  I always hit the coffee bo 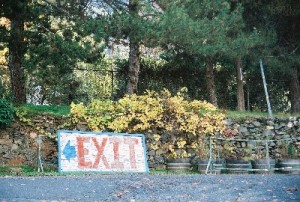 oth though, and Dini made an annual pilgrimage to the kettle corn.

I didn’t realize at the time that this might be the last year of our tradition.  Sharon is moving, about three hours north of Sonora.  This makes the fair a lot less convenient.  I would have paid more attention if I had realized that.  Somehow, the drive to Sonora, the golden and blood-red leaves of the trees and vines around the grounds, the girls in their silly elf costumes, the bouncy-house and the music, the smell of hot oil, candle perfume, chocolate and coffee, the press of the people, is part of Thanksgiving for me now. a standing stone marking the turning of the year for me.  I guess now I’ll have to find other event, another way to make memories, and create another tradition.

This entry was posted in View from the Road and tagged apparel, art, crafts, Murphys, Sonora, Thanksgiving. Bookmark the permalink.