The Thursday holiday didn’t go quite the way I’d envisioned it.  A little bit before nine I drove over to Spring Lake Park, on the east side of Santa Rosa, to go for a walk.  I’d allowed an hour, which was about right, to get all the way around the lake. The park was full of dogs and their humans, including two beautiful Malamutes, one of whom did a trick for me, with her human’s help.  Pictures will follow. 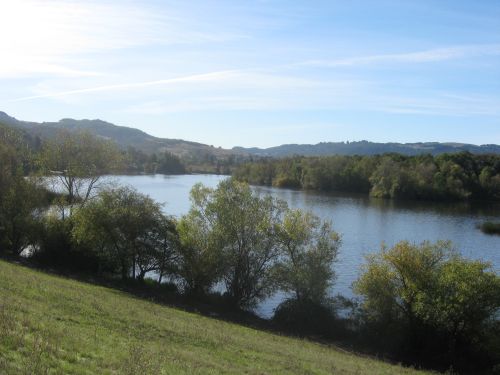 It was a glorious day at the lake.  The trees have changed color and the lake bounced their images back in perfect proportion.  The Canadian geese were hanging out at the water’s edge, hoping to be fed.  Gorgeous birds, and noisy.  I find their metallic honking pleasant, but I know that a lot of people don’t.  Greater egrets flapped in a leisurely way across the water, perching on overhanging branches or waiting in the shallows.  A group of cormorants had possession of the lake that morning also, drifting placidly, now and then hanging their wings open to dry.

My plan had been that a walk around the lake would get my creative engine revved and I’d do some subconscious work on my Nanowrimo novel.  That didn’t quite happen.  Less than a quarter of the way around the lake my right calf started hurting.  This wasn’t the first time, although it is a relatively new experience.  A knot of cold pain stuck itself right in the curve of my calf.  It wasn’t a cramp.  I can’t tell if it’s nerve-related since I do have sciatic problems now and them, or whether it’s actually a circulation problem and I should worry.  The logical observation is that I have been completely sedentary, walking maybe once or twice a week, for the past several months and the cure for this problem is more walking, not less.  In the immediate situation, though, pain did distract me from thinking about work.  After about half an hour the pain diminished, settling into the background.

After I ran an errand for my mother-in-law, I took the “back” Santa Rosa streets; Montgomery to Brookwood, Brookwood to Third, Third to E, along residential streets mounded with gold and red leaf confetti.  It was midmorning and a holiday; traffic was—well, it wasn’t; usually  just me and one other car.  From E street I went north to 7th and turned left.  I was afraid I’d get to Holy Roast late (I was meeting Lillian at 11) but in fact I parked in front and walked in about six minutes early.  The place was packed; not a table to be had inside, and the deli case was cleaned out. This was a disaster!  There were two large parties with papers and binders, maybe business groups, boards or clubs.  I sat down outside the café but still inside the building (in the lobby) for a couple of minutes.  One big group left and that freed up one of the small tables they’d merged to make enough room for everyone. I went inside and grabbed it and snagged two chairs, just moments before Lillian got there.  And they weren’t completely out of food.  She found a fruit-nut-chocolate bar/cookie thing that was pretty tasty. 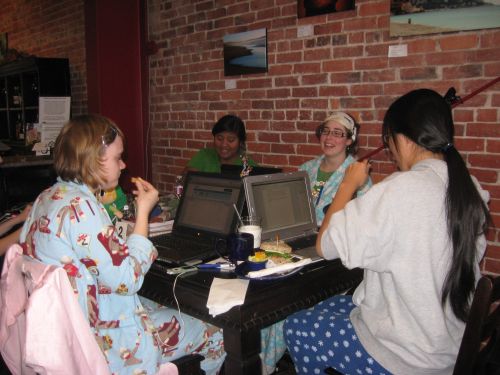 After lunch at Nonni’s, an Italian restaurant on Mendocino Avenue, we drove down to Café Azul to see if the pajama-clad wrimos had actually followed through on their daring plan to write all day at the Café clad in sleepware.  Five hardy souls were actually there, at a table in the back, lounging in front of their laptops in pjs, robes and slippers.  One of them had fixed a webcam to a strut on the wall, and they were live-streaming it, although I couldn’t figure out where.  (I did check out their Flickr feed when I got home).  Lillian and I, much lower-tech, ordered dessert, sat at the table next to them and wrote in our notebooks.  And by “notebook” I mean “a bound collection of paper pages, often lined, meant for writing.”  A little while later Leah, from the Monday night write-in, joined us.  She had a laptop, advancing the average technical sophistication of our table by a couple of centuries.

The pj-wrimos were in a giddy state when we got there, and there was a sustained burst of conversation and giggling from them.  It lasted about an hour.  At one point they started to settle down, but a male friend came in.  He was not going to stay for the write-in, or perhaps not just then, but he kept the conversation going.  Oh, and they sang.  And they were good!  Leah chuckled when she heard them.  She pointed out that on the forum, they had been asking people to bring extension cords, only one poster consistently spelled it “chords.”  “Well, they can sing,” she said.  “I guess they really did mean ‘chords.’”  (We also sang one verse of King of the Road at our table, but quietly.)

About three o-clock the pj-wrimos got very quiet and focused.  Our table was quiet too, and I had been writing pretty consistently, but when I looked at my word count when I got home, I had really only written about 1,000 words.  That was really too bad, although I added another thousand after dinner.  Maybe I was just too entertained to concentrate.