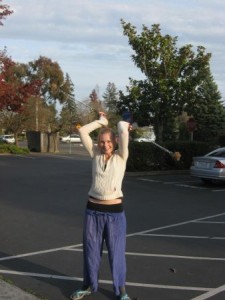 I saw her in the grocery store parking lot, next to Cheeko’s Corner, where I get coffee.  I thought she was practicing. Those silvery lines over her head with the brownish lumps at the end are chain, and the lunps are some flammable medium that is soaked in kerosene, squeezed out, and then lit on fire.  She said she actually thought of it as a performance, since she would normally practice with tennis balls–since the chains hurt if they hit you.  (Imagine how much they would hurt if they were on fire.) 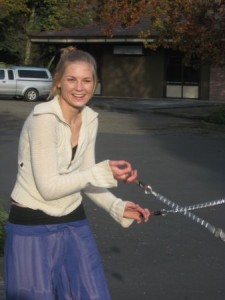 Her name is Tieva.  I called what she did firedancing, but she said it’s firespinning.  The only other time I’ve seen it, the person did have the the balls lit.  It was night.  I got some pictures of arcs and parabolas of fire–but none of the spinner heself. 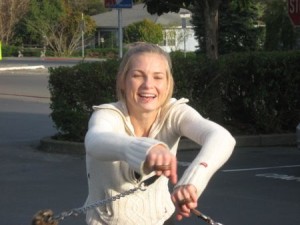 I asked Tieva if she did firespinning in a greater spiritual context.  She thought about that for a few seconds.  “I feel my spirit rise out of me when I fire-spin,” she said.  “When I’ve got the fire and the sound and the energy, I feel my spirit.” 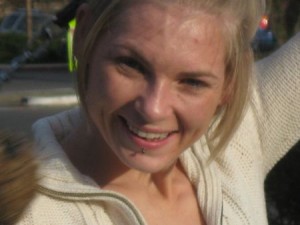 This entry was posted in View from the Road and tagged Fiesta Market, Firespinner, firespinning. Bookmark the permalink.