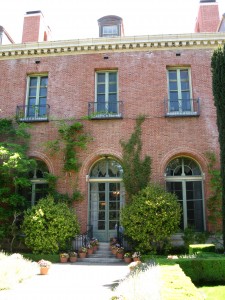 “Time began in a garden.”

That saying is etched onto the sundial in the middle of the garden at Filoli, an historic California Bay Area country estate.   I don’t know exactly what it means.  It has an “Adam and Eve” resonance that is not particularly comforting.  Did time suddenly start after they ate the apple of the tree of knowledge?  Perhaps it’s just that gardens take us deliberately through the familiar cycles of nature; the cycle of the seasons, the cycle of the day, and the cycle of birth, death and re-emergence.

Filoli, the estate of William Bowers Bourn and Agnes Bourn, sits just south of Crystal Lake in San Mateo County, California, about half an hour south of San Francisco on Highway 280.  Behind it to the west, oak-clad coastal hills rise to provide a green and backdrop, and probably, in the summer, silvery tendrils of fog drift over those hills in the evenings.  The house and gardens are maintained by the Filoli Foundation, and open to the public from March through October.  The house is impressive; the garden is magnificent.

William Bowers Bourn II inherited his first fortune.  His dad came out to California from New York in 1850.  Dad was one of those smart guys who decided that while gold mining was tedious and dangerous, selling staples to gold miners would be profitable, and made a chunk of change “mining the miners.”  He ended up with a gold mine eventually, though; the Empire Mine in Nevada County.  His son William II was born in 1857.  Will Senior died in a mysterious gun accident when William II was away at college in Cambridge, and William II came home to take over the family business(es).  In 1902 he started the San Francisco Power Company which later became Pacific Gas and Electric; in 1908 he started the San Francisco Water Company.  Bourn joined forces with environmentalist John Muir to fight the building of the Hetch Hetchy reservoir—Muir for nature-based reasons, Bourn, obviously, for profit-based ones. Ultimately he was unsuccessful, but it didn’t seem to have dented the family fortune too badly because in 1915 he and his wife Agnes Moody Bourn began building Filoli.  The house was completed in 1917.

The garden comprises 16 acres.  It is a long rectangular garden running more or less north-south.  Part of this was because William liked to sit at the highest point of the garden, the High Place, and look down the garden toward Crystal Lake. The layout is pretty formal.  Off the drawing room of the house is the sunken garden, with a reflecting pool.  At the north end of the house is the Old Rose garden, facing a meadow and stand of black-trunked California oak trees.  The Bourns were big on Irish stuff, and columnar Irish yew trees are used throughout the garden to guide the eye and create a dramatic backdrop, since they are such a dark green.

My friend and I went there on a Saturday in mid-May.  If you’re a fan of roses, this is a great time to go because many of the more-than-300 varieties of roses are in bloom.  We were afraid it was going to be hot, because where we live it had been over a hundred degrees the previous week.  I was reassured.  It was in the low eighties, clear and sunny but with a light breeze.  I recommend a hat and sun-block to anyone who plans to spend several hours in the garden. 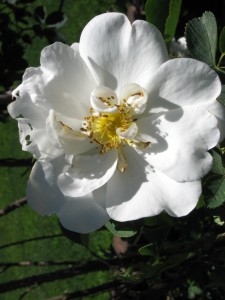 The roses were glorious; tree roses and hybrid teas loosely furled ruffles of color against green hedge backdrops, full buds upright, looking like wine goblets.  A woman said to an older woman I assume was her mother, “That was the tree rose garden, they call this the standard rose garden,” and the mother replied indignantly, “They shouldn’t call it standard!  It’s much better than that.”

A sign explains that no pesticides are used are used on Filoli roses, but that they are bred to be bug and disease resistant. 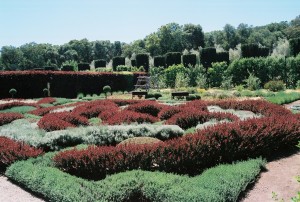 As you walk south in the garden you come to an area with wide borders in blue and violet; lavenders, salvias, love-in-a-mist and scores of other blue plants and flowers line the edges.  There is a knot garden of red-leafed plants and gray-silver santolina, planted to look like cords looped into a knot.  It is not the most spectacular thing in the garden but it’s my personal favorite.  I’m just a sucker for things like that.

Facing south, if you look to your right you will see the walls of the aptly named Walled Garden.  I would call it a shade garden (but who asked me?).  Huge magnolias provide shade for rhododendrons, ferns and creepers.  A terrace with a portico at the south end forms the western boundary of this feature.  If you stand at the end of the terrace and look north you see the chimneys of the house just above the yew columns.  There is a swimming pool, a hothouse and potted orange trees.  The swimming pool aligns with the shallow reflecting pool in the sunken garden, which points straight at the clock tower of the old carriage house.  The clock in the tower still chimes the hours; the building is now the gift shop.   Since you can hear the clock chime from anywhere in the garden, it is possible that time actually began here, at Filoli. 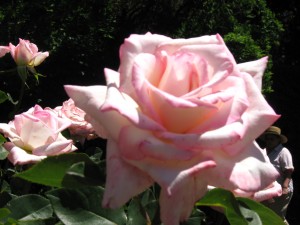 There is a cutting garden with various varieties of flowers clustered by color, including peonies, roses and dahlias.  There is a “gentleman’s orchard” next to the High Place.  On our visit, the orchard was off limits unless you signed up for a tour.  The garden has lilies, pansies, iris, California poppies, flowering shrubs, shrubs whose foliage provides the color, an orchid garden and a stained glass garden (which I’ve never seen in bloom) where low shrubbery breaks the bed into patterns which are planted with specific colors, to resemble stained glass.  This is not a coincidence; one of the original garden designers was well known in San Francisco for his stained glass work.

The High Place is simply a lawn with a row of yew trees forming a crescent-shaped wall behind it.  It does give you a good view of the garden.  Tall Roman-like columns alternate with the trees.  They are supposed to be the ballast columns off the gold ships.  The reason they are there is because in English gardens, there was always a place with a view and columns, or so I heard.

In short, to quote a twenty-something guy who was walking ahead of us in the sunken garden, “Whoa.  This is pretty nice.”

The house is made of red brick and sets off the yew trees and the lawns beautifully.  After we had walked in the garden for a few hours, we were pretty warm, so it seemed like a good time to go through the house.  You can take a “self-guided” tour, and there is a docent in every major room who is eager to tell you about the family, or about the house itself.  Very few of the furnishings in the house belonged to the Bourns, but the Roths who owned it after them and lived there until the 1970’s did donate some items.  In most cases, the foundation located period pieces and used then to re-create the flavor of the house in the 1910s and ‘20’s.

A band of olive trees separates the house and grounds from the visitor center.  I don’t know if they harvested the olives back in the 1920’s.  The trees have been lovingly pruned and form a shade canopy. The ground beneath them is dotted with benches for foot-weary visitors.  The day we were there, they were hosting an artist reception for artists from a juried show who submitted paintings inspired by the garden.

One garden manager, twelve gardeners and over one hundred volunteers maintain the garden’s beauty. The garden doesn’t feel like “nature;” it is too formal and shaped.  It feels like art.  It is an opposite/complement to the ghostly wheat-gold wild oats and the gnarled black and green oaks that surround it. A few yards away from the garden or the house, the visitor hears the wind soughing through those oak branches.  She hears quail, occasionally the three-note call of a woodpecker or the high-pitched scree of a hawk. Did time begin here?  Perhaps, after all, it did.

One Response to The Gold Miner’s Garden