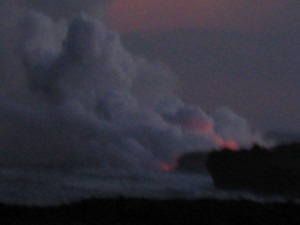 My friend took us to see the Kilauea lava flow.  As you head south into the Puna district on the big island of Hawaii, you pass a mileage sign that says something like, “End of the Road, 5 miles.”  The road really does end, because lava flowed over it.

Right now most of the lava flow comes from the Pu’u O’o vent. Where the hot syrupy rock drips into the ocean, a convoluted plume of white steam roils up at least four stories high. People think of a geyser.  It doesn’t look like a geyser.  It looks like a pillar of twisting white cloud, streaked or dotted, at times, with puffs of brown or silvery gray.

We followed the signs and the park rangers’ directions along a rutted dirt road onto a section of paved road that has been turned into parking lot.  The parking lot is open until 8:00 pm; viewing is possible until 10:00 pm.  The rangers, in florescent green and orange vests, wave you into your parking space (you have to back in).  You walk past a short promenade of vendors selling coffee drinks, handmade jewelry and photo prints of lava, and between an honor guard of porta-potties—one brand name is Rent-a-Lua—onto the lava.  The first thing you see, and many ignore, is the large Safety sign.  My friend’s son, Daniel, said, “I want to actually read the safety sign,” and he did.

The current trail is picked out in green and orange pylons, about three feet high, and brick-shaped adhesive markers stuck onto the rock itself.  In some places the rock looks like glass, shimmery, iridescent, multi-colored, and in other places it looks like rope, or silk drawn through a ring, or intestines.  These smooth ropy tendrils of lava are called pahoehoe lava. Vivid green fern fronds have already pushed their way up through the gaps in the rock, as have a few “For Sale by Owner” signs.  It’s a good buy if you have five hundred years to wait for it to be arable, or you don’t mind building your house on a place where you know molten rock has been flowing continuously since the 1980s.

You walk across lava.  If you’re an urbanite, you could kid yourself, for a while, that it’s just a 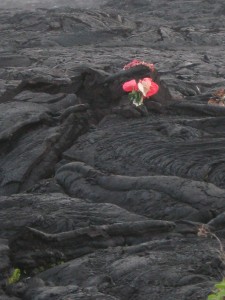 really uneven blacktop parking lot—until, at some point, you remember that none of this cracked and stair-stepped blacktop was here two months ago.  You look at a bush that the lava detours around.  You stop and look down at the bush, and you realize it isn’t a bush.  It’s a tree, a tree that’s about twenty feet high, and only about three feet of it now rise above the rock.

The rangers said it was about a three-quarter mile walk, but it didn’t seem that long.  Together with many other tourists, we drifted out onto a small arrowhead-shaped scarp, cordoned off with more of those handy fluorescent pylons, roped with orange safety tape.  Here’s where you really get the point; just past the pylons, the lava drops off abruptly, about a fifteen foot drop to the previous lava flow, which drops off into the ocean.  The surf was up and breakers were hurling infinity-sign streamers of white froth into the air.  To our right, across a wide band of black, the steam pillar writhed. It’s hard to judge the distance, but I think we were about a mile away.  In sunlight, all you could see was the steam, churning steadily upward.  If you looked back up the slopes of Mauna Loa, you could see a delicate line of stream rising from the earth, where the lava flows underground towards the ocean. The sky around the pillar, and toward the mountain, looked hazy or cloudy as the steam spread out, and the air smelled like sulfur. My eyes and the back of my throat started to sting.

End of the road, here.

All this was before sunset.  The sunset alone was pretty spectacular; with multicolored clouds drifting over the crest of Mauna Loa.  Once the earth turned and the sky grew darker, you could see the golden and orange globs of lava as they flowed into the water. It isn’t like water from a faucet. It’s irregular. Gouts of orange light leapt up, diffused by the steam, while lozenges of fire-colors rippled in the water.  All kinds of colors melded there, the bluish, purplish sky, gray and white steam cloud, water that was a hundred different colors, the reds and oranges of the molten rock from under the crust of the planet. 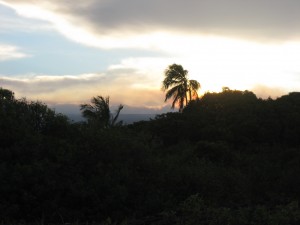 Think about vents in the earth’s crust that release this ribbon of melted rock (2200 degrees Fahrenheit), think about it spinning out like sugar syrup boiled for candy-making, resting in long folds and interlocking loops, streaking down to drop into water, the most abundant element on the planet.  Imagine the necessary heat exchange taking place, the energy of that exchange turning the water into a swirling column of steam.  I picture the “skin” of these worms of lava cooling first, getting tacky and sticky, while the center of the worm, still fluid, extrudes into the water.  I probably don’t have the science right, but it’s still awesome.

If you’re of a more fantastical, or spiritual, turn of mind, you can see this elemental play as the work of the gods.  Pele (rhymes with jelly) is the volcano goddess of Hawaii and it is easy to watch this dynamic dance of earth and fire, water and air and see a powerful dancing goddess at its center. You could believe that this churning of elements is a battle– or love-play–between Pele and her adversary/lover Kamapua’a. In the stories about Pele she is strong, powerful, a force not to be ignored; destructive sometimes, passionate always.

And all of this, all of it, is about real estate.

Yes, it is.  Not the “for sale by owner” kind; the real kind. This is about creating earth, the kind we walk on, build on, grow our food on. Earth magic or earth science, the lava flow is about putting stuff on the top of the planet’s crust, or into its atmosphere, that wasn’t there before; minerals, walk-able space, earth. Somehow the human ability to push filler out into a waterway or swamp and then build structures on it, structures that often fall down during the first earthquake, seems piddly and childish. Look at me, mommy!  I made real estate!  That’s nice, dear.

The spewing lava forms a platform for spores and seeds that will blow or be dropped there, to take root and grow.  Obstructions in the ocean will affect wave action and air flow.  In a few years, this will be surface; in a thousand years it will be dirt, and in ten thousand years, a jungle.

This violent, impressive, colorful process is all about making earth. Science, ancient gods, and real estate.

If you are going to see the lava flow, it is best to wear sturdy, thick-soled shoes and carry a working  flashlight for each person in your party.  Coming back in the dark is treacherous and the lava is sharp.  In Hawaii, no matter what you are doing, it’s a good idea to have water, mosquito repellent, sun-block and a hat.