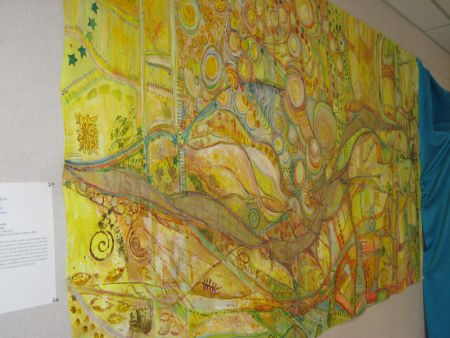 Janet Self is an artist who has been at the Mendocino Coast Writers’ Conference at least two years now.  She creates swirling abstract designs on paper and fabric, and incorporates words.  Her mural was the backdrop for the room where the readings were held last year.  She donated that piece, “Writer’s Excavations,” to the conference (it was on display in the reading room this year as well). This year she had a work in progress in the courtyard, inviting writers to come up and add to the work with our medium, words. 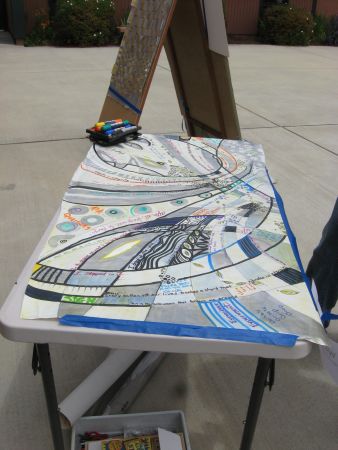 I stood for a few seconds behind the woman who stood with the pen in her hand, waiting for the words she wanted to write to show up.  Janet was working on the other piece while we stood.  She talked about the process. I felt that she was disappointed; that somehow, the project had shipwrecked on the shoals of her expectations. 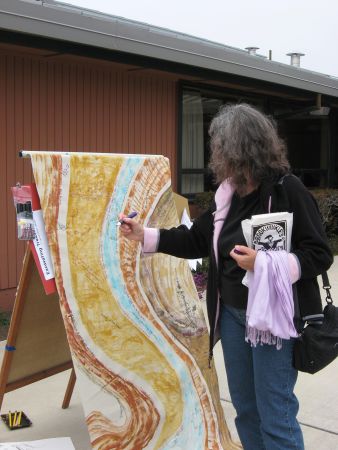 “I thought the writers would just be, well, more playful, and take up the colorful pens and write something,” she said, “but a lot of them say, ‘I have to go away and think about it.’ ”

I could have told her that.  Non-writers, or rather, writers in their everyday world, not at a conference, would be as playful as all get-out and write all kinds of things on her beautifully colored paper.  At this conference, every single writer is about the right word. The minute you pick up the pen to write words that are going to interact with art, it’s a performance, and all our competition and performance anxiety kicks in. 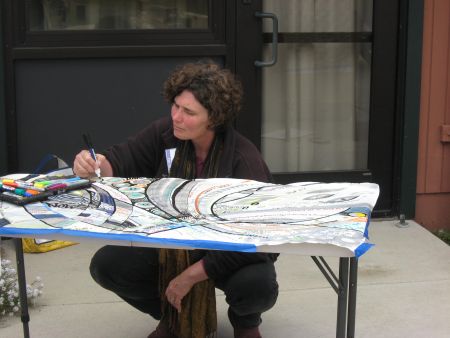 I thought she was getting some good words, in spite of that.

2 Responses to Art and Words