(The pictures in this post may or may not go with the text.)

Last week I stopped at Fiesta to pick up some halibut for dinner. A note about Fiesta—the official name of the store is now “Pacific Market.” They’ve had to keep the two-story cake-icing-colored neon sign on Highway 116 because it is an historical marker, but the owners own all the Pacific markets. To me “Fiesta Pacific” sounds like a cruise line, so it will always be Fiesta to me, just as the performing arts center up the freeway a bit will never be Wells Fargo Center as far as I’m concerned. Luther Burbank—known for feeding people. Wells Fargo—famous for helping drive our economy off a cliff. Which conjures the more positive image? Let me think. . .

But anyway, fish counter, halibut. The woman pulled out a fillet, frowned at it, frowned at me and said, “I won’t sell you this.” I was kind of hurt. I mean, I’m a good customer. I’m a nice person. I never did anything to her.

“Smell.” She shoved the rectangle of pearly white flesh under my nose. It smelled fishy. Strongly fishy. As anyone who’s ever watched The Food Network knows, fish should not smell fishy. It’s not an oxymoron. It means it isn’t fresh. She was doing me a favor. I bought some salmon instead.

I stopped at Copperfield’s to pick up a young adult book by Kage Baker, called The Hotel Under the Sand. I spend a lot of time in Copperfield’s, just not in the children’s section. I don’t fully understand the system back there. The books are loosely divided by age or developmental stage, which makes perfect sense, if you know where the book you want should be. I’m used to finding Kage Baker in the adult Science Fiction section. Ahead of me, a slender dark-haired woman in beige linen pants and a top, with sleek brown hair, browsed the shelves with an authoritative air. She made me feel even less competent. Then a young man brushed past me and said to her, “Can I take my break now?”

“Sure. Is the sign up? It’s pretty quiet in here; you just go ahead,” she said. She worked there! That explained the complete confidence with which she skimmed the spines and titles of the books. 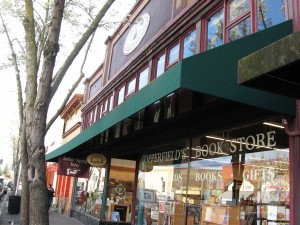 I promptly asked where I would find the Baker book, and she led me right to it, in the middle school section. Being a bookstore employee (and one of the good ones) she immediately began to offer other books by other authors that the reader I was getting the book for might like. I’d been looking in the high school section, so she said, “Is the person you’re getting it for an advanced reader?”

“Oh.” She blinked, but she rallied. “You don’t have to tell anybody what section of the store you got it in.”

I’m worried that Milk and Honey, the goddess store, may be falling on hard times. They are adding a coffee/tea counter and a few tables in the back of the store. A lovely thought, but it reduces space for inventory. This makes me think they plan to carry less inventory, perhaps because inventory isn’t moving.

Also, if you count the town square directly behind them, here are the places within a block that will serve you coffee, coffee drinks or tea:

Doesn’t this seem like a lot of competition? Maybe they’re going to do psychic readings and Tarot spreads, etc. In that case they’ll only be competing with Infusions and the farmers’ market on Sundays. But then, I thought the Pine Cone was an unlikely proposition and it’s still around, so maybe I just don’t understand business.

This entry was posted in Around Town, View from the Road and tagged Copperfield's, East West Cafe, Kage Baker, Milk and Honey, Pacific Market. Bookmark the permalink.