“Are you an observer?” At least three people asked me that.

“No, I’m a volunteer.”  I arrived at the Registrar of Voters office half an hour early. They didn’t quite know what to do with me. At seven in the evening on election night the place was bustling. In the front, the drive-up window was staffed by a cheerful blond woman, and one of the department’s administrative service officers was using a computer to check something when I walked in. They handed me off politely two or three times until Pamela adopted me and took me back to the warehouse. 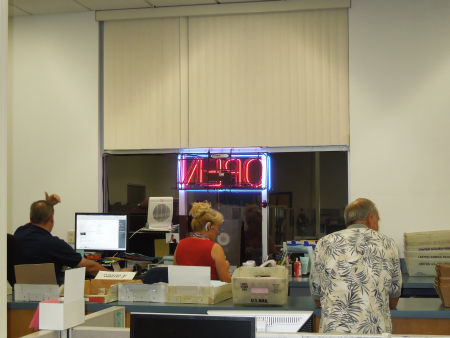 “I’m here to validate ballots,” I said. That’s what I’d signed up for, and I was a little worried about what it might mean. Did I have to compare signatures? Check addresses? Sign an oath that the ballots were legitimate? What?

“You’ll be checking the ballots to make sure there are no tears or stray ink marks in the tracking column so that they go through the reading machine cleanly.”

I found a chair in the corner just before Erin and Flo came in. The woman sitting next to me (I didn’t get her name) had been there since six in the morning doing various tasks. She was not a volunteer, but a Manpower extra help person, as were the six men setting up the wooden tables and moving around mail crates. While we waited, Joy conducted a “braid clinic” for Erin. I never got a picture, but Joy ended up braiding Erin’s hair like hers and it looked wonderful. 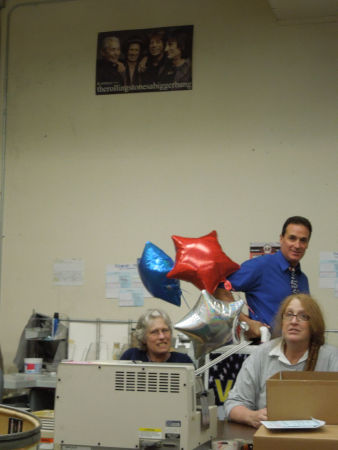 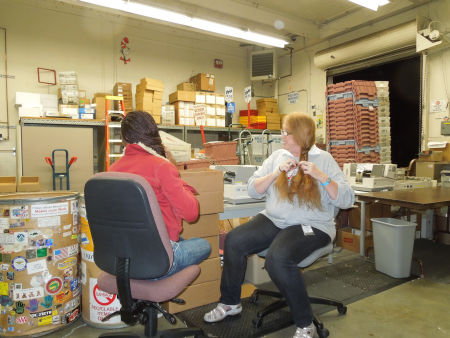 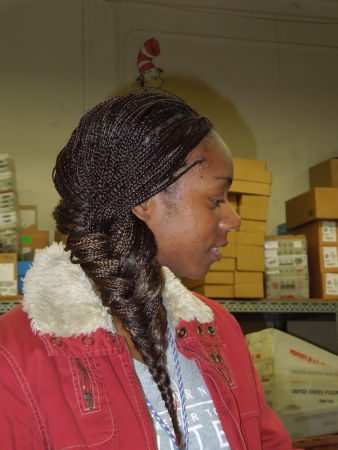 Three people asked me if I worked for the county. When I said I was retired, each one said, “Oh, are you back as Extra Help?” This is something of an in-joke in the county, where all retirees come back as Extra Help. They looked puzzled when I said I was volunteering. I did see some active county employees who were volunteering though, and a great many who work for the Auditor/Recorders/Assessors/Registrar’s Office and were there on overtime. I didn’t envy them. Yes, they are getting paid, but I would be sleeping in on Wednesday morning, and they would have to be at work, trying to act bright eyed and pretending to be cheerful. I would not.

Chipper-flippers work in pairs, because two sets of eyes need to look at each clutch of ballots. My conclusion, after four hours of chip-flipping, is that a past career as a blackjack or poker dealer, or a sleight-of-hand magician would be the best experience for this work. It involves riffling ballots and looking for ink marks, smudges or tears (rips, not the residue of grief). The rips could be anywhere, but the marks/smudges only mattered if they were in the tracking area, that set of black squares that marches down the right edge of each ballot. Lead or marker ink there will confuse the machine and jam it; they have to stop the tally, unjam the machine, duplicate the ballot, and re-run it. 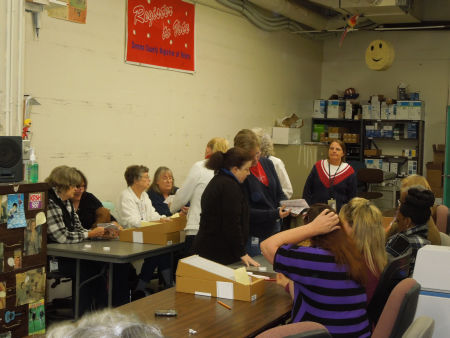 The lady at the left rear in the gray and black plaid is “flipping” her ballots while her partner scrutinizes them.

Any ballots we found with problems were set aside. We wrote in the number of problem ballots on a tally sheet that came with each sealed box, and we each initialed. They we called “Dupes!” and a runner came and took the box. The problem ballots are duplicated, again, with a transcriber and a watcher. Each ballot is counted. 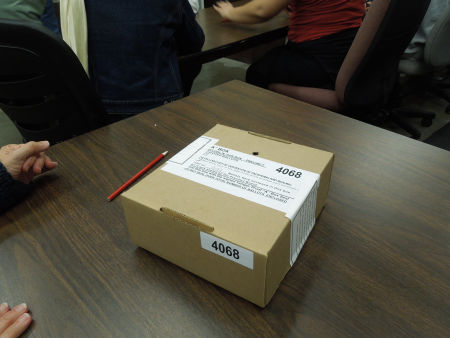 This is a small box (many boxes were twice as long). The seal was split by a professional employee with a watcher. You see a theme emerging.

Sonoma County has a population of about 532,000. There are 262,000 registered voters. The Registrar of Voters distributed 187,000 ballots, enough to cover 71% voter turnout. Each polling place also has provisional ballots for people who spoil their ballot or mark the wrong box, or who show up at the wrong polling place. While I was waiting I heard Pamela dealing with two situations where people had shown up at the wrong polling place; either the place had changed and they hadn’t realized it, or they’d moved.

(What if 99% of the registered voters turned out? I imagine that would be pretty amazing. I can’t remember anything much more than a 60% voter turnout in my lifetime. Choosing 70% seems to be prudent in terms of conserving resources like paper and power.) 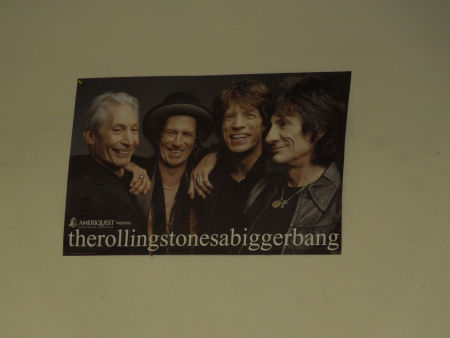 Who better to oversee this exercise in democracy than The Rolling Stones?

After the polls close at 8:00 pm, the polling places have to reconcile the vote. I don’t know what this involves but I can guess it’s matching ballots to the number of names checked in. (I don’t know what happens if you don’t balance!) The ballots are put in a box with a yellow paper—our ‘problem ballot” tally page —the box is sealed and it looks like it’s signed by at least one person. 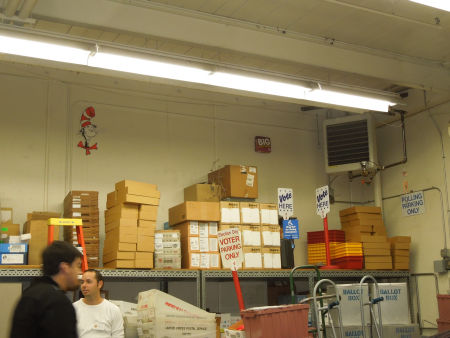 Before we got started, Brenda said to me, “You know once you’re here you can’t leave.”

“What?” I was thinking I couldn’t even leave to go to the bathroom. But was this true? Nobody had said it outright, but when I got the e-mail the time said, “7:30 to ???” Apparently you can’t leave the site once you’ve signed on so that there is no danger of you sneaking out a box of ballots or something. I had visions of us being there until six in the morning and driving home in the sunlight. (That didn’t happen.) 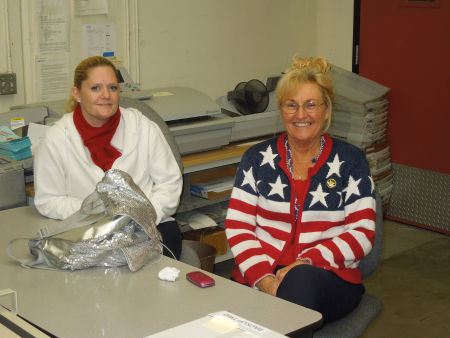 Waiting for ballots in patriotic attire.

My partner, Brenda, said they were expecting a big turnout, and she thought we’d have a long weight because reconciling would take longer. I know that at 8:30 we had no ballots, so I started playing with my smart phone and discovered that Obama had taken New Hampshire, Ohio, Iowa and Michigan and had 265 electoral votes. The big roll-up door on the east side of warehouse was open and a cold breeze was blowing in. I put on my sweater.

We were pretty slow. Brenda is a bit slow because she is thorough and exacting. I was slow because I lack manual dexterity. Brenda pulled a number of ballots that had a slight gray discoloration between two of the black squares. The discoloration occurred in the same place on several ballots, regardless of what box they came from. I thought it was a printing flaw, and that it would probably be all right (better safe than sorry, though). When we showed them to Pamela, though, she wasn’t sure and said it was probably better to pull them. They continued to show up, and we continued to pull them. 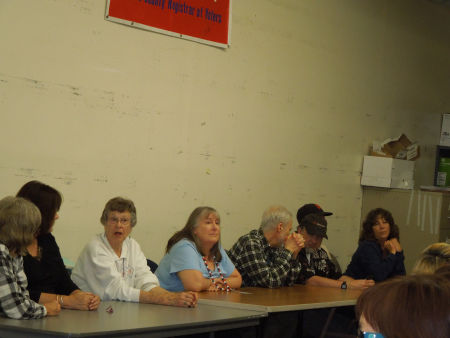 At 10:10 our time, Janis Atkinson, the current Registrar came in and announced that Governor Romney had conceded the election. By then we had boxes and boxes of ballots. I was riffling about 40 at a time. Brenda could do a bigger stack and had this trick of fanning them by bowing them slightly, fingertips underneath the stack of ballots. They would fan with perfect evenness. When I tried it, they would fan with perfect unevenness.

When we walked away for a bathroom break (yes, they are permitted) I saw another pair working. The woman was holding a stack of ballots about two inches thick by the edges, and fanning them like a book. It looked efficient, but a little too fast to spot much. She would never have noticed the gray discolorations that Brenda caught.

We found two ballots with tears and about fifteen that had felt marker marks in the tracking channel. We found food stains on two or three, and about twenty, total, with the discoloration.

Apparently anyone can observe the ballot process. Some folks do because they have a strong interest in an issue and want to be sure the whole thing is above-board. Some people observe out of curiosity. I confess I would like to observe the whole process sometimes, but I think if I’m going to be in their way one of the two busiest nights of their year I should make a stab at being useful. 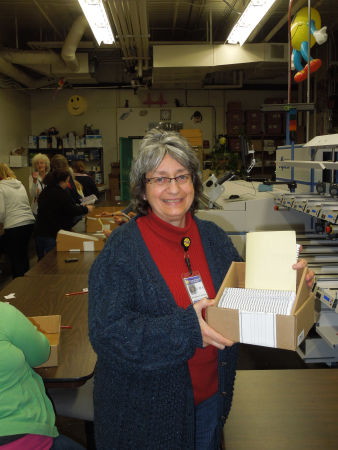 Brenda with our last completed box.

At one in the morning they were about to finish up. My hands ached and my neck ached from craning to look at the ballots. If I closed my eyes I saw glimmering squares of light.

We were finished, but the process was not. Votes were still being counted and the front of the office was still bustling with people. I drove home in the fog.

This entry was posted in View from the Road and tagged Ballot, Democracy, Election Night, Registrar of Voters, Volunteers. Bookmark the permalink.