… Until it Reaches Up and Grabs You

Books are machines, in a way, are they not? They are communication devices; televisions, telephones, time-travel machines, letting a person we don’t know and may never know share their thoughts, fears, visions and beliefs with us. Books are diagnostic devices… and sometimes, incendiary devices.

When I write “books are machines,” I’m writing about content. Except for the pages, books do not have a lot of moving parts. A page is almost the mundane world’s icon for something two-dimensional—it has length and breadth, not height. (I’m not speaking scientifically or mathematically here).

Books are not mechanical, except when they are mechanical books. 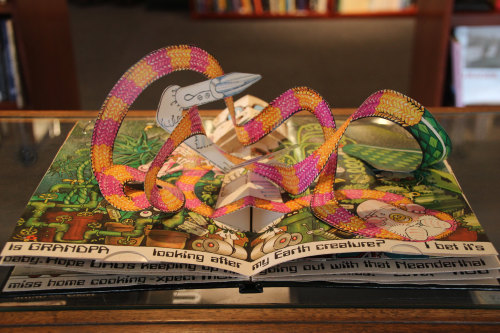 From the book Robots

Mockingbird Books bought a treasure trove of pop-up and mechanical books from a man Brandy knew from her time at Copperfield’s. He had hundreds; she didn’t even buy them all. They range from children’s books, to specialized, to R-rated (The Pin-Up Pop-Up Book). 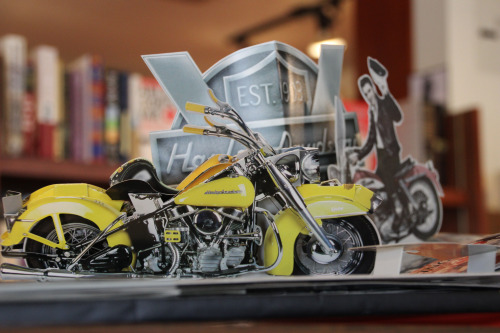 Motorcycles, trucks and firetrucks are all well-represented.

Books with parts of pages that move actually go back a long way, it turns out. The first recognized “moveable book” is attributed to the mystic poet and astrologer Ramon LLul of Majorca, who published a book in 1305 that contained a volvelle. We’ve probably all seen volvelles and maybe even made them in grade school; two pieces of paper, circular, fastened at the center loosely enough that they can turn (like with a rivet or brad). Often a notch is cut out of the first one and pictures/words are written on the bottom sheet; the top wheel turns and the notch uncovers the writing or picture on the bottom wheel. The first example I remember is a color wheel my mom had. I’ve seen them for astrology, wine-tasting, herbalism, astronomy, tables of elements and many more things than I can name.

A teaching aid for astrology?

Volvelles were quite common in scholarly works, but the next big jump in mechano-books came in the 1770s. Common among these were tunnel books, where a hole die-cut through the pages allowed the viewer to see a picture as if through a tunnel or a telescope. Some of these were elaborate, with cutouts left in the foreground to create a 3-dimensional effect. Basically, this was burrowing through the pages of the book; in effect, cutting a hole through it; not unlike hollowing out a book to hide your drugs or your money. Well, not your drugs, of course. One’s drugs.

Or perhaps your camera

(I did hollow out a book when I was a teenager – and no, I didn’t hide my drugs in it. I hid two ten-dollar bills in there, in case I needed them, and then a couple of peso-notes that I brought back from Mexico,and later a really pretty button that I found on the street. Yes, I was a weird kid. In my defense, the book in question was a paperback novelization of a TV show called The Mod Squad, so I don’t think the universe went into mourning at the desecration of that particular batch of deathless prose.)

A handful of names are attached to moving-character books. Ramon Llul is the first. Dean and Son publishers, who started in London in the late 1790s, claimed to have originated the “moveable character book for children.” From the mid-1800s to the early 1900s, they produced at least 50 titles of books with things that moved.

Lothar Meggendorfer (there’s a name to conjure with!) a German illustrator who worked in the 1860s is justly famous for his pop-up books. Meggendorfer’s books used levers and rivets to create pages where more than one thing moved. The most common example of his work is The International Circus.

Rafael Tuck, who started off with greeting cards, set himself up as Dean and Son’s primary rival with his series of “Father Tuck’s Mechanical Stories” in the 1870s. Earnest Nestor added the innovation of scenes that were set so that they canted out perpendicularly as the leaves of the book were opened. This is probably the image most of us hold of the Pop-up book today. 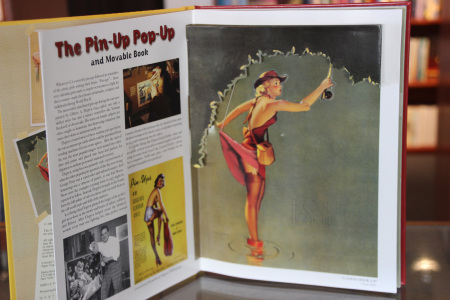 Not even the most racy page in the book.

Pop-up and books with things that move are feats of engineering as well as works of art. I think part of the reason I am fascinated by them is that I have trouble visualizing in three dimensions. These truly are mechanical, using the same principles as mill-wheels, levers and pulleys to bring a picture to multi-dimensional life as a book falls open. 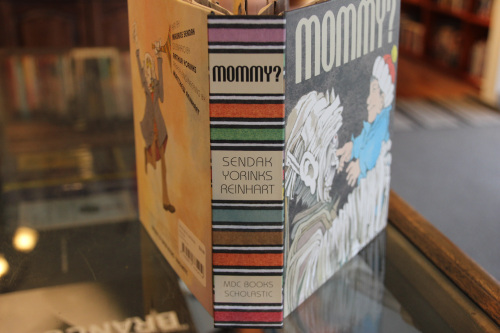 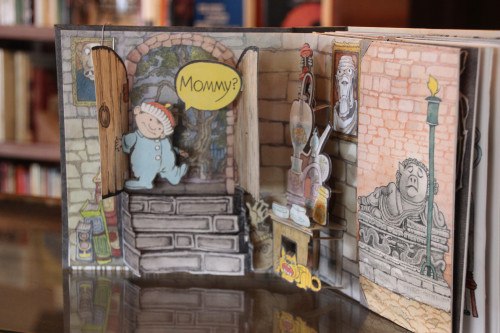 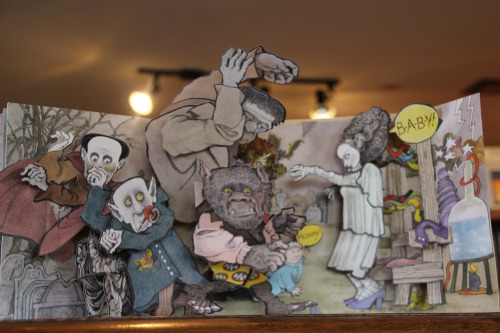 Do you remember your first pop-up book when you were a kid? What was your children’s favorite? These charming book-toy hybrids have a longer and more storied history than I imagined.