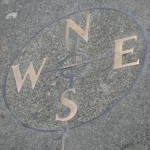 Lillian and I went on a photo-safari in Petaluma on Monday.  The day was a blue-sky, puffy-cloud day, without the rain I half-expected after Sunday.  Between Petaluma Boulevard and Kentucky Avenue we found photo-and-shopping ops galore.

The Seed Bank is one of the town’s two old Boulevard banks, which has been converted into an heirloom seed and organic gardening store.  The place is perfectly laid out and the high, high ceilings create a feeling of spaciousness even though there are q 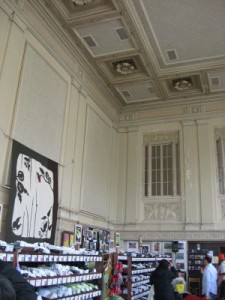 uite a few shelves.  In addition to seeds, books and magazines on organic gardening and gardening tools, the Seed Bank also had some displays of art and educational work from local elementary schools.  They also had a couple of beautiful quilts.  I bought some wildflower seeds for my front yard, and some veggies for the back—and then learned, for the first time, that flower seeds are taxed and fruit and veggie seeds are not.  It’s quite logical, since we don’t tax food.  “What about edible flowers?” the woman next to me in line asked, drawing a laugh from the three of us.  The clerk’s advice?  “Don’t go there.”

We stepped outside, looked around and down, and found the four points of the compass, in brass, embedded in the sidewalk below our feet. 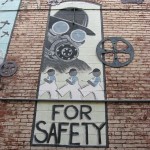 Safety Alley.  “Steampunk!” Lillian said as soon as we walked into this wonderful alley with the red brick walls and 1920s-style murals in shades of gray and black.  (I think the actual name of the alley is American Alley, but it’s always Safety Alley to me.)  If you are heading south on the boulevard you’ll see a courtyard on your right.  There’s a fountain, and a Starbuck’s on the corner.  In the courtyard is a Thai restaurant called Thai Ginger Bistro, and a quirky 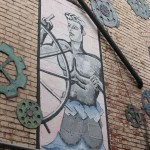 gift shop, Boosha.  There is also a smoke-and-adult shop (perhaps the next field trip for the Republican National Committee?)  If you turn right at the smoke shop, you will walk straight into the alley.  While we were taking pictures a helpful native guide appeared—he owned one of the businesses on Kentucky that backs onto the alley—and he told us about the pictures.  They were painted 40 years ago, in the late 60s.  A local man (our guy knew him) had a latino student who was artistically gifted and he and some friends did the paintings.  That made me wonder if the handsome, topless steersman is a self-portrait.

Works of art in themselves, the murals make great photo subjects because of the contrast with red brick.  The machine-cogs tie the whole thing together.

We walked all the way down to the end of the alley, finding some great shadows and intriguing graffiti.

ago Pizza.  To my surprise, Old Chicago Pizza was open for lunch on a Monday.  It’s still in the same place, the second floor of the Lanmart complex, where it’s been since the 1970s.  Each table has a metal cylinder with a wide lip around the top.  There is a candle in the base of the cylinder.  The server sets your pizza on it, and the candle keeps it warm.  They are famous for Chicago deep-dish pizza but their extra thin crust is also excellent.  They serve a great salad for two with dressing on the side in the little metal serving boats.  We had a seat by the window, overlooking the street.

Steamer Gold Landing and the Waterfront.  We walked down to the old Steamer Gold Landing.  The bridge, the railroad tracks, the brick buildings and the tranquil river all provided great picture opportunities.  Lillian, who does wonderful bird pictures, spent several minutes photographing the pigeons. They were vari-colored, but each of them had the neck collar of iridescent lavender feathers.

Viva Cocolat.  I said I would go back to provide more information on this chocolate café and I am keeping my word. 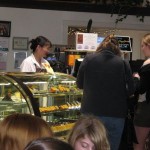 We stopped here for dessert.  Lillian had the mousse.  I tried the European sipping chocolate, which came in a demitasse with a whipped cream cap.  How to describe the flavor and texture?  Imagine taking a sheet of chocolate chip cookies out of a warm over.  You pick one up, juggle it, blow on it, and then you bite into it, cutting through a morsel of melted chocolate.  That’s what this felt and tasted like.  I’m not sure it technically qualifies as a drink, unless a milkshake qualifies.  It was so rich I couldn’t finish it.  That’s right.  I think you’re supposed to stir in the cream, which is what I’ll do next time—or order a cup of hot water and use that to cut the last third of this luscious creamy confection.

Kentucky Avenue.  We walked up to Kentucky just in time to catch some live music, performed by a young guitarist and banjoist.  We both exercised extreme self-control and by-passed the Copperfield’s store. (This was very difficult, because this branch has the best used book section of the entire chain.)  We did stop at the print shop, though, because they were having a sale. 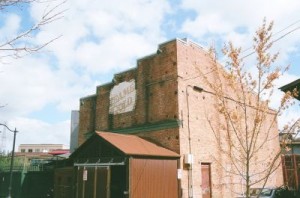 It was a great day, but we left plenty to come back for.  There is still D Street, the new theater district, and I’m not done with Sunset Line and Twine yet.

This entry was posted in View from the Road and tagged murals, Old Chicago Pizza, Petaluma, photography. Bookmark the permalink.