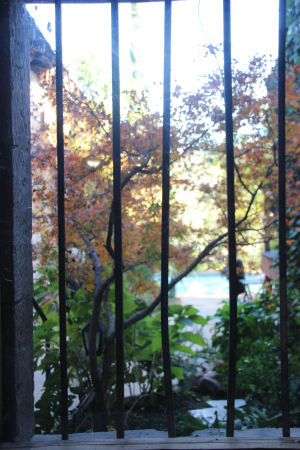 The town of Mokelumne Hill curls around the gold country hills on Highway 49, next to the north fork of the Mokelumne River, which this dry November was mostly rocks and gravel bars with very little water to be seen. Locals, and the roughly 700 residents, call the place Moke Hill for short. You can understand why. 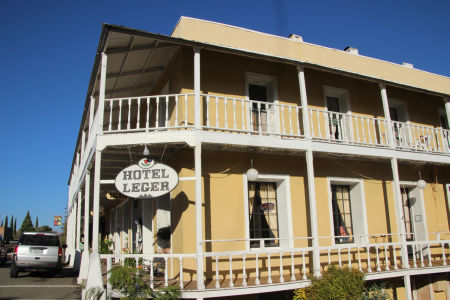 Hotel Leger. You can’t miss it, and this time that’s true.

Smack in the middle of downtown Moke Hill sits Hotel Leger. The hotel is an historical building; it has been many things in its long career, including the town hall and, briefly, the town jail. The current innkeepers are quick to capitalize on this history and the possibility that the place is haunted by George Leger; if you stay there, they will rent you a “ghost hunting kit” for an additional $15.

Since Moke Hill was a bigger and busier town in its heyday, the jail probably saw a lot of business. Founded in 1848, the town was one of the richer placer gold strikes. In the 1850s the population ballooned up to 15,000, and the ethnic diversity, abundance of cheap booze, and chance for riches made it a wild town indeed, with about one homicide per week according to Wikipedia. The hotel was built in 1851 (the current Hotel Leger comprises three buildings where the 1850s French Hotel was one, and part of that was a tent).

After Thanksgiving, where Sharon served enough food to feed the town of Moke Hill for a week, probably, we drove from Murphys over to Moke Hill to decorate the downstairs dining room for Sharon’s sister’s birthday. The room was the former jail, and the owners have stuck in rebar “bars” to re-create the environment. They also create a crash-into-while-drunk hazard, so our decorator, Denise, instructed us to wrap them in white twinkle lights, which we did. That looked pretty nice, but Denise was not done gilding the lily. She brought about eight rolls of glittery, patterned gold mesh that she found at the Dollar Store, and had us wrap the mesh over the lights. It diffused the lights and created a rich, misty glow. 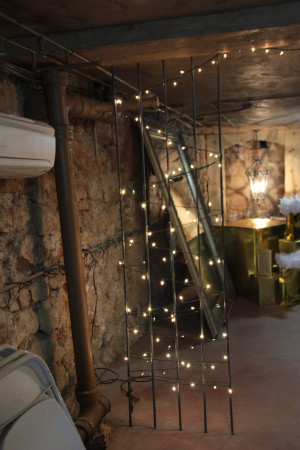 The half-done lights. Yes, that is a gigantic mirror back there and no, I don’t know why. 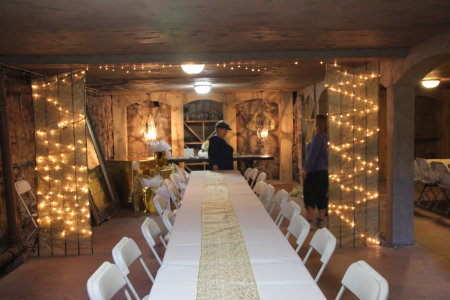 And completed. I love how the rows on the left look like a swirl of fireflies, and the ones on the right are all even and elegant.

Denise’s husband was going to jump out of a decorated box at the party, to the strains of the ancient song “The Stripper,” so while two of us wrapped lights and mesh, the rest assembled a large box and covered it with gold paper. Denise created a “stage” of gold and white gift boxes. The tables had while tablecloths and we ran the rest of the mesh down the sides. When the servers came down, they set the table with white plates and gold napkins. I didn’t go to the party, but I hear it looked gorgeous. 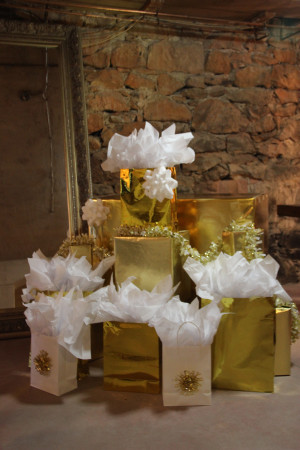 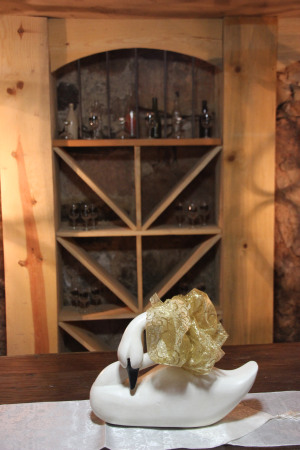 Next to this dining room is a smaller room with a high, arched ceiling and no windows, and a large wood stove. They call it the dungeon. That’s supposed to be a joke. It was probably, from the shape and the thickness of the stone walls, the arsenal, but dungeon certainly felt right. I didn’t like it. Denise said later she went in and turned on the lights in there and it was “cosy,” but I still would not have liked it. 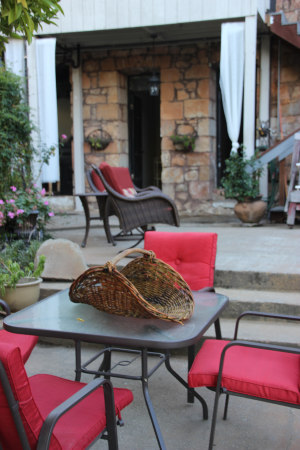 In the courtyard, looking back at the structure

The yard has mature citrus trees and a pool. On Friday, it was about two-thirds historical loveliness and one-third post-season mess. I’m sure they cleaned the pool before the party. 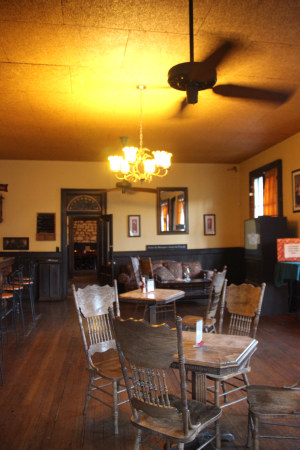 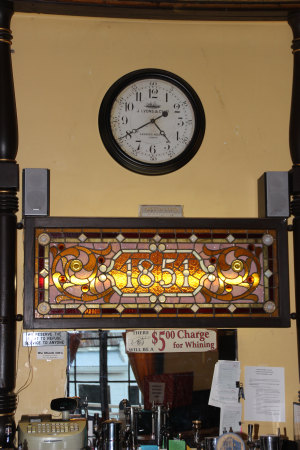 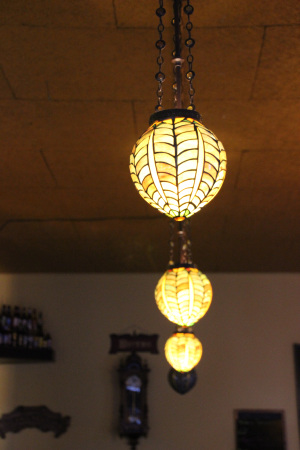 The bar upstairs is great; lots of wood and stained glass. Our bartender, Ritchie, mixed lemon drop martinis for three of us; then, when we were the only ones in the bar, he shared his seasonal drink, a Pumpkin Pie. This shaken drink has two kinds of rum (Captain Morgan Spiced rum, obviously); pumpkin puree and half and half.  The hotel is developing a number of Theme Nights for the bar to entice both the locals and the tourists; Thursday night is Martini Night; they have a couple of events around sports.

Ritchie makes a perfect lemon drop martini, or so I am told. 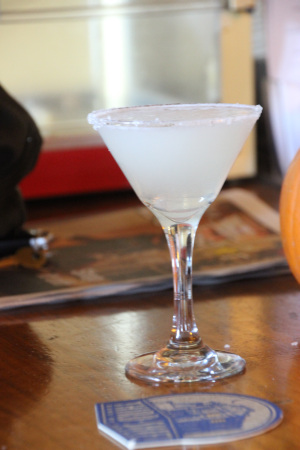 The lobby is decorated with a mural that I think detracts from the original beauty of the place and actually cheapens it a bit. 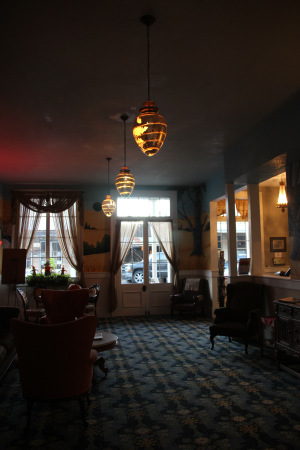 How the lobby could look. 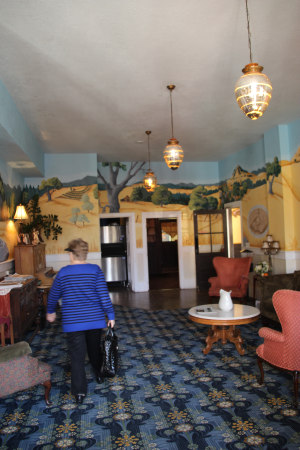 And with the very-busy murals.

About a year ago the new owners were in trouble so they invited in “Hotel Impossible.” Whatever changes that guy made (apparently about sixty local regulars turned out to help with the labor) the place is getting good reviews on Yelp and other sites. If Hotel Impossible Guy thought up those murals, though, he was just wrong. 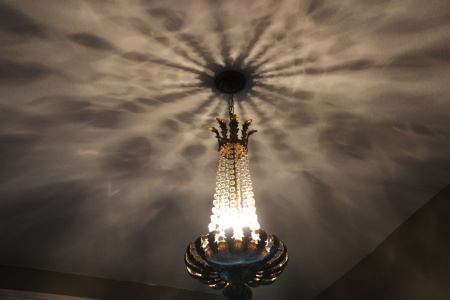 Hotel Leger is the gritty, gold-town Victorian, built on the side of the hill, with creaking floors and uneven stairs, not the prettified Ferndale Victorian experience. There is a lot of California history to see, but Moke Hill does not offer great shopping or eating experiences (although the hotel’s kitchen is well-rated.) I think most tourists use Moke Hill as home base and hit the tourist-glam towns like Sutter Creek and Jackson during the day.

It seems like a lot of Moke Hill locals are older. The stairs from the bar to the downstairs dining room/ “jail” are exterior, made of stone, and uneven; probably original to the building. From the jail dining room you take three cracked, uneven steps down, then two more shallow steps down to the courtyard and the pool area. The place seems a bit risky for anyone unsteady on their pins (especially since they are probably coming from the bar). If you know that, though, you can certainly adjust for it. 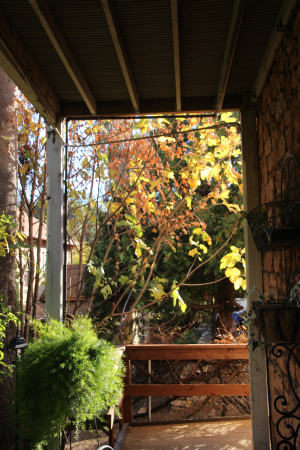 Hotel Leger dominates Main Street and is a picturesque focal point to this village, with its rich local history. I’m going to have to stay there, at least one night, just to see what it’s like.