The Nebulas; The Last Panels

I’m in the elevator riding down to the room where the SWFA Nebula panel on “Writing Other Cultures, Real or Imagined,” is being held. Two SWFA writers enter the elevator.

SWFA Writer 1:  I’m moderating a panel of “writing other cultures” and the whole panel is white people. 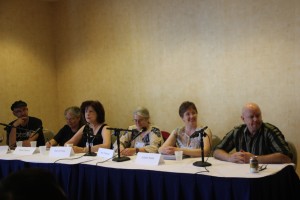 Based on that, you might guess how the panel went. It got unpleasant because there were a couple of Big Personalities with Big Opinions, and little concern about whether the opinions were germane to the topic.

Nancy Kress stated that she had “written in other cultures back when it was politically safer to do so.”

“Politically safer?” Are you worried that a loved one or a child of yours is going to lose their job, or their house, because you write things that are “politically incorrect?” That they won’t be allowed to get married, or attend a certain school? Are you afraid you’re going to lose your job or your house? That people will take away your medals and awards? Are you afraid that people are going to cart you off in the dead of night and you will never be seen again? Those are the kinds of things that happen to writers in places that are “politically unsafe.” Or are you afraid that a group is going to say mean things on their blogs or on Twitter? Oh, please, lady. You’re a Hugo and a Nebula winner. People like your stuff. You actually have a backlist. Quit complaining.

Juliette Wade had an interesting perspective because she uses Japan in her work, and she lived in Japan for a time. Wade is interested in languages and creates alien languages in her work. If she is approaching a contemporary culture or historic culture, she looks at linguistics, daily practices, social power relationships within the culture and regional variations.

Amy Thomson starts with travelogues. She said that “culture is the filter through which people get their needs met.”

Nancy Kress is interested in the physical and economic world the culture inhabits. How do they grow food, get water, build and trade? She tends to start with memoir.

Chaz Benchley likes, if possible, to go to the place. He also wants to read histories; the culture’s own histories, not book written by others necessarily.

Diana Paxson wants to know things like how people in the society say “No,” and how they use pronouns and verb tenses.

The official panel takeaway for me was; write about other cultures with respect, and do thorough research.

The unofficial takeaway was, “Geez, people! Can you move on? Maybe it’s not about you.”

There were two editor panels; one of book editors and one of magazine editors. The book editors panel had some great people on it; Jim Minz, from Baen, was hilarious. I didn’t take away a lot of new information but I sprinted up to my room and Twitter-followed a couple of them, and befriended them on Facebook.

The news from the magazine panel was mixed; it’s great news for editors, bad news for writers right now; it’s a “buyer’s market.” Having said that, that is also great news for readers, so overall I think I’m happy.

I have gone to the weekend twice now, and programming has been its weakest link both times. Still, it is wonderful and inspiring to get to hang out with, and talk to, the great writers, reviewers, thinkers and fans.

2 Responses to The Nebulas; The Last Panels