I have two more panels I plan to discuss here on the blog. This is one; the “Writing Other Cultures, Real or Imagined” is the other. I’ll probably do a short posting about the two editor panels, which were interesting, but these were the two I took the most notes on.

“Intelligence and Law Enforcement; Superspies and Supercops” was held after lunch on Friday. This was a terrible time period for the panel! Many people wandered in late because lunch had run longer than they planned. And anyone who has to lecture or talk to a group after lunch is starting with a deficit. 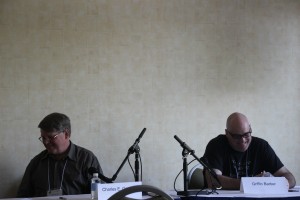 In spite of that, the two panelists did a fine job. Charles E Gannon is the author of the Nebula-nominated space opera Fire With Fire. He has been invited as a subject matter expert and guest lecturer to many meetings of the various US intelligence agencies. Griffin Barber writes stories in the “1632″ universe (as does Gannon), and is retired from law enforcement. I think, but I’m not sure, that he was a cop for 18 years. 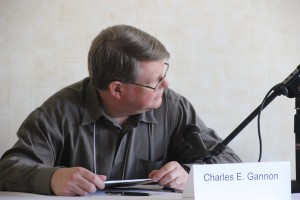 Gannon:  One of the first things to recognize is that intelligence goals are very different from law enforcement goals. Law enforcement is designed to end/prevent crimes and bring criminals into the justice system; intelligence is designed to find out what other human beings are doing. He used the term “OpFor” (Oppositional Force) to avoid naming any group. It isn’t about apprehension and processing; it’s about finding out stuff.

“Finding out what other human beings are doing is and has been invariant across time and across culture,” Gannon said.

He said that very often the process is like “a blindfold game;” each side is in the dark trying to predict what the other side is doing or will do. He talked about the choice to do something unexpected and spontaneous, just to monitor what the other side does. ” How they respond will tell you something.”  The loss of human life is anticipated; completing the mission is the goal (the sole goal).

He talked about the roles in intelligence (and this is where most fiction gets it wrong). Intelligence work uses compartmentalization to make sure that there is rarely a person who knows too much information. In fiction we’ve heard the terms “cutouts” and “dead-drops,” and these are real techniques to make sure that the loss of one member does not crash an entire network.

Functions in intelligence include:

Usually in thrillers and spy novels, the agent does her/his own surveillance, also acts as an analyst, etc. Gannon points out that since readers are pretty savvy, this can be easily addressed by having a character removed from the board, forcing the main character to step into dual or multiple roles. “I’m an analyst, I’m not a control guy!” in other words.

Rather than training and rehearsing outsiders, who maybe speak a particular language or spent time as a child in a country, and sending them in as assets, intelligence operations usually look for a true local they can turn to their cause. Gannon says the trope of the American born-and-raised who spoke Urdu to her grandfather every Sunday and therefore is able to infiltrate a group in Afghanistan is unlikely; they are going to be exposed almost immediately. A handler would do better to find a local and persuade them to spy.  As far as persuasion goes, both men talked about the well-known acromyn MICE:

Barber laughed at this one, Ego especially. “They were disrespectful to me! I’ll teach them!” I raised my hand and asked if they thought either ego (a disgruntled employee) or excitement (a thrill-seeker) were good choices. They both said no. Barber said that Ideology was the best, but that people tripped up because they didn’t truly understand the difference in ideologies. 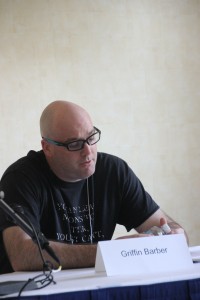 Barber:  Barber segued in a little bit here (basically the whole discussion was a back-and-forth between two men who are good friends and who know their topic). He said in the land of law enforcement undercover, you often do send in the outsider who has a backstory and speaks the language because they have a better chance of pulling it off (basically, they really did grow up in the same culture, often). A concern law enforcement has that intelligence never does, “Am I going to be able to explain this to a jury?” Both speakers agreed that there is a nexus between criminal entities like the cartels and terrorism; even if that nexus is money. Various Central American cartels, for instance, have helped terrorists come into the US — and they’ve done it for money.

Barber also gave examples of some of the holes in the local information-sharing networks. Networks? Maybe that’s too strong a word. It would be a really nice idea if local cops could share information, when they find it, that seems to have an intelligence aspect to it. Functionally, while this is getting better, it’s very hard to do.

It was a good overview with lots of insights into the process and good nuggets of information. I will draw on this information the next time I write something that has an intelligence operative in it.