SF in SF… In San Jose

SF in SF is a science fiction writers group that was the brainchild of Terry Bisson. It meets months and the proceeds from the bar at the event are donated to a charity. The Thursday, May 15, 2014, bar till was donated to the SFWA Emergency Medical Fund. The SF in SF (in SJ) event kicked off the Nebula Awards weekend. 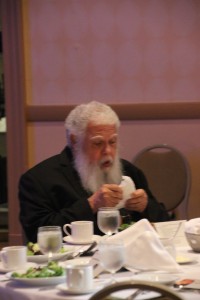 Reina Weisman introduced Terry, Daryl Gregory (author of Afterparty) and Samuel Delaney, the newest SWFA Grand Master. Gregory had Delaney as a teacher at Clarion, so the two traded a few anecdotes before getting started.

Gregory read a sweet and sad short story called “Persistence,” about a woman whose brain tumor symptoms include a “persistence” of vision; every minute of every day she faces an image of her fourteen-year-old daughter as they have an argument in the car. She can hear other things around it, and respond, but this is what she sees every moment. “Persistence” shares thoughts about brain function, the medical profession, and ultimately about the bonds between family members. It’s a story, in many ways, about “what we see when we say we are seeing.”

(Hearing Daryl Gregory read “Persistence” is what made me want to read Afterparty.)

“I am very, very fond of bad reviews,” Delaney said,and then read us one, of In the Valley of the Nest of Spiders. The reviewer, after listing all the things they didn’t like (all the sex apparently), made a comment like, “Open the book to anywhere are random and put down your finger and you’ll find…” So Delaney took the challenge, he said. He read us a section he opened to at random. It did have sex – a discussion of it, anyway. It also had solar panels. It might have had pornography, and it definitely had food pornography; the description of the ribs sizzling on the outdoor grill made me taste them. And his character makes coleslaw the old-fashioned way, with the shredded cabbage falling “like snow” onto the counter.  The book is 800 pages long, and follows two gay men in their lives from 2007 up through the 2080s. Apparently the reviewer also felt that the book was not science fiction, which inspired Delaney to point out that “there was one scene set in 2013. Last year, that scene changed genres! It became mainstream! Then it changed again this year! Now it’s an historical novel!”

Delaney talked about academia and its stance toward genre work (which is becoming more accepting, but too slowly he says. When asked why, he said, “Well, money, of course.”)

Both writers talked about the place of technology/hardware, responding to a question from the audience; in old SF, to the questioner’s way of thinking, technology “took a front seat; now the people do.”  Gregory described it as a process issue for him.

“It’s a writing trick,” he said. He mentioned how to work the details of new tech into a story in a way that makes it seem like part of the character’s everyday world, rather than pausing the story to give a three-paragraph explanation of how new-tech worked.

“Science fiction is really good at giving a critique of the objective world,” Delaney said. He talked about “old school” SF which gave the main character a chance to see the new technology up-close; the character was an engineer, a scientist, an astronaut, or soldier. Delaney is more interested in how the technology affects people at a farther remove from it, the everyday people living their lives.

Borderlands Books had a “pop-up” store in the back selling Gregory’s and Delaney’s work. We sat next the Sofia Samatar, who had flown up from Ventura (she teaches at UC Channel Islands) for the weekend. Samatar was nominated for a Nebula for Best Novel; A Stranger in Olondria. She said her flight was uneventful, but the shuttle ride from Ventura to LAX was a nightmare; she allowed two and a half hours, and still nearly missed the plane. Samatar teaches English and writing and a course in Arabic last semester. She said she is still adjusting to California, having lived her a little less than a year.

The event, like last year’s, was inspiring and fun. The drinks were overpriced, but it was a fund-raiser, and Terry Weyna bought me mine (thanks, Terry!) so I can’t really complain.

3 Responses to SF in SF… In San Jose