Fact versus Fiction; A Nebula Panel

The title might not clue you in; this is a panel about how writers use research. This panel was fun and lively; sharp, humorous panelists who knew and liked each other, allowing for banter and a lot of riffing. The following writers comprised the panel: 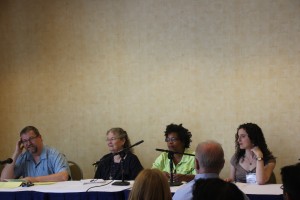 Andy Duncan moderated, starting off by saying, “Fact versus fiction kind of makes it sound like a cage match!”

His first question was, “To what extent do you believe there is tension between historical accuracy and fantasy?”

Veronica Schanoes, who wrote “Burning Girls”, talked about political realities. Her personal ethic is to make sure that fully human-authored atrocities do not get blamed on supernatural elements in her work. “Burning Girls” is about a young Jewish witch who comes to America from Poland… and the Triangle Shirtwaist Fire. Veronica worked to make sure everyone remembers that the fire was caused by human agency.

Ellen Klages imagines that her readers read a detail of hers, say to themselves, “I bet that’s not true,” go look it up and find out that it is true. “The more details you get right, the more they believe everything else in the story.”

Nalo Hopkinson had my favorite line of the panel:  “Fact is fun,” she said, “Something I had completely missed throughout school.”

For me that pinpointed an important point about this panels (and I might generalize to most writers… at least, most spec fic writers); they’re curious. They love to find out new stuff. They love research.

Diana Paxson played a bit with the wording, suggesting that “Fiction versus fantasy” might be part of the discussion. She had an SF writer tell her once, “Of course you fantasy writers don’t have to do research.” (Eyes rolled throughout the room.)

For her, a fantasy novel, especially historical or quasi-historical fantasy, has three layers:

To make that third one believable you have to nail the first two.

Klages and Duncan shared fascinating facts about the Nebula-nominated “Wakulka Springs;” they did lots of research about the filming of a Tarzan movie in Florida in the 40s. They also went to the place and walked around. “It’s important to take notes on what it feels like to be sweating in 102-degree weather when you actually are sweating in 102-degree weather,” said Klages. “When you’re back in the Bay Area and you’re wearing a sweatshirt, you’re not going to remember.”

Duncan told about getting to hold the actual manuscripts of Zora Neale Hurston’s interviews that she did for the WPA and the sense of awe that gave him.

No panel on the pleasures of research is complete without a caveat about how much to put into the work. The consensus was, use the pointed detail rather than slopping in two and a half pages of painstaking exposition because the reader probably doesn’t care.

How do you manage your research?

Two people answered “Scrivener” but I couldn’t tell who (I think Andy Duncan was one.)

Someone else said it just goes in piles in their cluttered room/house.

They all agreed they liked boots-on-the-ground and getting to touch things, taste things, and so on… and they all loved the internet for its immediacy and its ability to put them in touch with experts, collectors and aficionados everywhere. And they also included it as a guilty pleasure; you can spend hours on the internet following links, watching a YouTube video of how to cast a spearhead out of molten bronze or listening to Polish folk songs.