That’s me, at Friday night’s reading by the contest finalists. Linda Goff, who drove up from Santa Rosa and spent the night in Mendocino, came to hear me read and took the picture. (Linda and I meet a couple of times a month and do writing exercises together.)

When Jules, our irrepressible MC and local poet, introduced me, she said, “She’s going  to read the whole novel! In five minutes!” When I got to the mike I said, “But I’m going to do it really, really fast.” 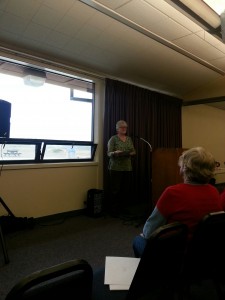 It is my blog, so I put my picture first, but I did not read first. I read fourth. Some  fine writers got up there ahead of me.

Gloria Jorgensen read a short story about a southern family. She did two accents; “Yah,”she said, after Jules, our irrepressible MC, introduced her and had a question about her name. “Yah, it is Skond-ah-navian, yah.” Then she slipped effortlessly into a smooth as honey southern accent. 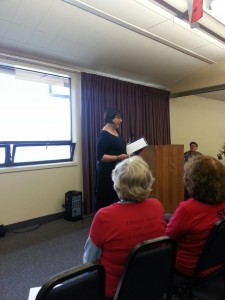 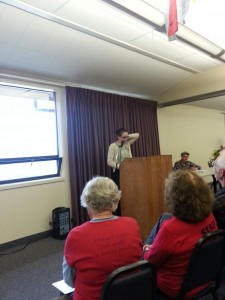 Chloe Saviego, second place finisher in poetry, read a poem called “How to Talk to Your Brother.”

The third place poetry winner, Vinny Peloso’s, work was more like language poetry. While intellectually I can see how it was good, I was not particularly moved by it. It’s a matter of personal taste. 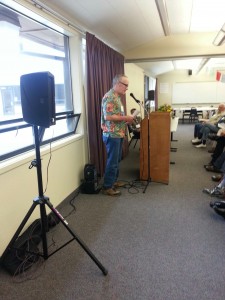 We didn’t get pictures of everyone. Here is who read Friday afternoon (first place winners):

Here is who else read Friday evening:

I had to leave after this group finished up, but Jules inaugurated Open Mike by reading a raucous, bluesy, loving and irreverent poem about Mother Earth we her big-head monkey children. A delight! And my admiration to the intrepid Open Mike readers who followed.