In the “Brevity” workshop we did some flash fiction writing exercises and the first of these was to write a flash piece about the Hopper painting. We were not limited to a 100 words, but I gave myself the challenge of turning it into a one-hundred-word story.  While inspired by the painting the story is not set in New York.

The title of my drabble (100 words) is Five Notes Descending. 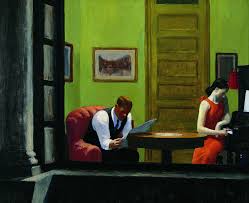 She played the five notes, descending. Behind her Robert stirred, rustled his paper, didn’t speak.

Five notes again, descending, striking her ears like cool water. The late afternoon sun, boiling over his hunched shoulders, simmered the room like soup. Beyond the window her prize camellia held streaks of golden light on its waxy leaves. She knew it without looking, as she knew that beyond the camillias the dahlias were nearly ready to open their multi-colored lion’s heads to the world.

He snapped the paper. “For God’s sake! It’s a promotion!”