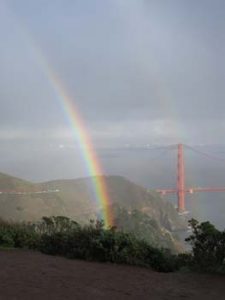 On the Saturday after Thanksgiving I went with a friend to the Marin Headlands. If it had been rain-free we planned to go to Hawk Hill, because the migration is in full swing and Hawk Hill is part of the flyway.

It was not rain-free.

We hit squalls of driving rain all the way down. It was a little stressful driving, but also reassuring and nostalgic. This was a cool day – temps about 57 degrees – with gray-white bundles of clouds and cold, driving rain that would beat on the car, or us, for ten or fifteen minutes, then fade, letting in sunlight. It was like the old pre-drought days, when we got rain in winter. I was cold but I loved it. 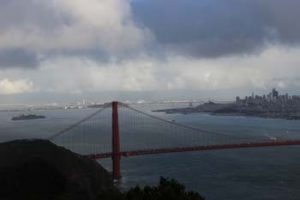 Golden Gate with both bridges, on a rainy day.

Traffic on 101 southbound was heavy, and traffic on the headlands, even heavier. After a little while my friend, who is also retired, exclaimed, “Oh! Saturday after Thanksgiving!” Yes, those out-of-state relatives who came for the holiday were going to get a view of the bridge come rain, shine, earthquake or typhoon.

To get to the headlands you can drive through Sausalito, or take the last exit southbound before the Golden Gate Bridge, which is what we did. The road up to Hawk Hill and the Bonita lighthouse was closed due to weather, so we went to the Marine Mammal Center. As it turned out, we could not have come through Sausalito because they had closed the tunnel due to the weather. 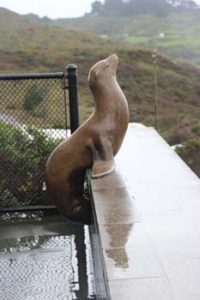 The Center is open to visitors from 10:00 am to 5:00 pm every day except Thanksgiving, Christmas and New Year’s. It is primarily a rescue center and hospital; it’s also a research facility and educational center. We paid for a docent-led tour, even though they told us they only had five “guests” at the moment and four of them were being kept out of sight of humans. Of those four, three would be disturbed by human interaction, and one had an eye injury; even the watery sunlight we were getting would cause her pain. In the front pen was a male elephant seal pup who had been brought in seriously underweight. He was being fed to get him up to weight (300 pounds). He was resting on a heated pad when we saw him. 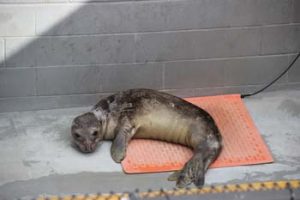 An underweight elephant seal pup rests on a heated pad, waiting his next fish milkshake.

Many of the animals they treat are pups. The steadily warming ocean has driven many varieties of fish either deeper into the water or farther from shore. This means mother pinnipeds and other marine animals must take longer to hunt for food for their pups, leaving the pups alone longer. Sometimes, they wander off in search of food themselves and wind up in places that are alien to them, like apartment complexes or restaurants.

Our cheerful docent described the “fish milkshakes” that the youngsters eat at the center; emulsified fish, milk (she didn’t say what kind of milk) with nutrients and vitamins added. They are fed via a large soft plastic syringe and a feeding tube. Later, young animals are taught to catch fish and before they are released, live fish are dumping into the large pool where they stay. Their release rate is good, and she said they don’t see a lot of animals come back.

They do, she said, get an otter now and then. Otters are transported immediately to Monterey Bay Aquarium, where the experts work. 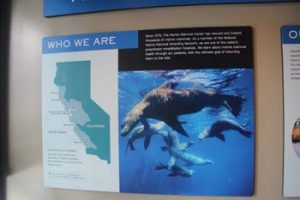 The Center is also a research and education center.

Besides hunger, ocean trash, particularly plastic, is a major hazard for ocean mammals. They get many mammals with permanent injuries because a ring of plastic from a six-pack got onto a flipper or their neck, and remained there. Additionally, they rescue animals who escaped from sharks but have wounds; or escaped from boat propellers.

The center is also a national research center. Here is their website.

They take donations, they have a great gift shop. This is an informative and pretty outing if you live in the bay area. Afterwards, you can drive down and walk on the beach, weather permitting, or go to the Headlands Visitor Center. We drove over to the other side, just to get a look at the city and the Golden Gate Bridge, and that’s when we saw the rainbow. 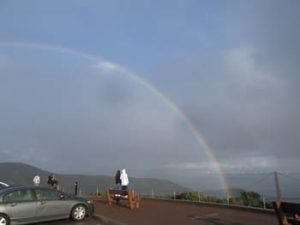 Rainbow over the Marin Headlands