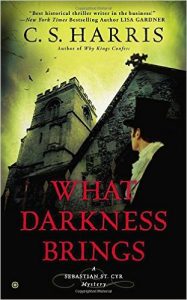 What Darkness Brings by C.S. Harris

On a whim I picked up a history-mystery last week. What Darkness Brings, by C.S. Harris, is the ninth book in the Sebastiann St. Cyr series, so it’s probably not the place to start. While I had no trouble following the storyline in this book, or figuring out the relationships, at least in broad strokes (Harris does a good job of giving a new reader summaries), I’m sure I’ve ruined the suspense for myself if I go back to read earlier books.

I enjoyed the story, and I had problems with the language. I’ll try to address both here.

Sebastian St. Cyr (I’m sure that’s pronounced “Sant Seer” or “Son-seer;” oh, the hell with it, let’s just call him Sebastian) is a gentleman in 1812 London. He was in the Army and fought in the Peninsular War; he has since sold out and married an “unconventional” wife named Hero. Hero is the daughter of a man who is Sebastian’s greatest adversary. Sebastian isn’t on very good terms with his own father either, though, and there is some mystery about his presumed-dead mother that has yet to be revealed. There is also a quirk in Sebastian’s earlier relationship with Kat. A time or two I did feel like I needed flow-chart software to help me keep the relationships straight.

Sebastian investigates crimes. Here’s what I don’t know that is probably explained in earlier books; what does Sebastian live on? He is his father’s heir even though they don’t get along, is there an allowance provided? Is he wealthy through his mother’s side of the family? I don’t know.

This book has Sebastian investigating the murder of a very unpleasant diamond dealer. The authorities have arrested someone for the murder; Russell Yates is the new husband of the former love of Sebastian’s life, the stage actress Kat Boleyn. (I will confess I completely bought in when I discovered Kat’s stage-name.) Yates was also in the war; he is now best known as a “gentleman smuggler.” But there is another secret to Yates, one much more intimate, and one that would cost him his life if it came to light.

The deeper Sebastian delves into the events surrounding the death of the diamond dealer, the more potential suspects he uncovers. The diamond merchant engaged in a particularly nasty type of blackmail and extortion. He also practiced black magic, and grimoires and spells get quite a bit of attention here.

At the heart of the story is a blue diamond, once owned by the Hope family. Yep, it’s that diamond – and the mystery touches on the theft of the French crown jewels during the revolution. This is great stuff! There are shootouts in noisome alleys, chase scenes with carriages and on foot; verbal sparring matches in public houses and drawing rooms, as Sebastian and Hero struggle with an abundance of clues.

Harris has a good grasp of the complex nature of the times; people who loved Ireland, for instance, saw no problem with spying on England for France.

Hero is a social reformer, scholar and writer with a variety of unconventional friends; a woman scholar, an elderly man who speaks and reads Hebrew, but I don’t know what he does otherwise. She is engaged in interviewing the poor youngsters who make a few cents a day by sweeping the streets and sidewalks at the crossings. Several things make Hero engaging and one of them is that she actively assists with the investigation. When she brings home a key witness, it isn’t by coincidence or mistake. It’s because she took the investigation to the streets herself.

When it comes to describing our gentleman action-hero’s clothing and accouterments, the book feels lifelike, as it does when we get wardrobe descriptions of Hero and Kat. The action is exciting. Plainly, when it comes to the theft of the French jewels, Harris did her homework. The spoken dialogue, however, is jarring, ringing mostly like 21st century—or at best 20th century—American. Hero’s scholar friend says that she acts out the rituals she finds in the 16th century tomes she studies so she can “wrap her head around” what the writers were thinking. Hunh? Excuse me? Sebastian frequently shouts, “Son of a bitch!” in the heat of the moment. That expression might have been in use—certainly “bitch” as an epithet for woman was – but it just sounds wrong. It made me feel like I was watching a series on the CW or Fox, allegedly set in the 19th century, rather than following a real 19th-century couple through 19th-century London.

In spite of this, which really did pitch me out of the book a few times, I liked the action and the mystery. I wonder if in the early books, Harris tried to make the dialogue more authentic, and it was an editorial decision to “dumb it down” for the audience. I plan to order the first two books at least, to see if that’s the case.