What Angels Fear by C.S. Harris 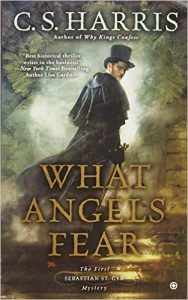 The first Sebastian St. Cyr novel, What Angels Fear, was published in 2005. We meet  St Cyr in Chapter One as he is preparing to fight a duel. Before that, though, we see the beginning of a brutal murder in the prologue. And all too soon, St. Cyr is the city of London’s primary suspect, with the need to arrest him—and hang him, preferably—for the murder being driven behind the scenes by Prince George’s confidant Charles, Lord Jarvis, who is stage-managing everything to ensure that the Prince’s installation as Regent goes through without a hitch.

Prince George’s regency brackets the action in this book and sets an important tone for the rest of the series. C. S. Harris does not care much for Prinny, and she delights in describing him as petulant and “feminine,” which presumably she means as an insult. He works well enough as a self-involved, weak-willed ruler who is being manipulated by a power behind the throne, in this case, Lord Jarvis.

Rachel York is an ambitious young actress who is murdered in a church in a vile and bloody way. At first, Sebastian St. Cyr seems like the only suspect, and when the police come to arrest him, things quickly get worse. Sebastian escapes into the London slums and soon is investigating the murder himself, because that is the only way to clear his name. He captures and then befriends Tom, a young pickpocket who becomes his able assistant, and is forced to call upon Kat Boleyn, a successful actress who was the love of his life, for additional help.

Harris sets up a good mystery, using a time-honored genre tradition, the time of death, as an important plot point. She also uses her time well to show us the St. Cyr family; Amanda, the bitter resentful oldest child, and Herndon, Sebastian’s emotionally cold father. Along the way there are fisticuffs, sword fights and chase scenes, ending in a dramatic extended scene at a waterfront warehouse. Harris’s action sequences are good, and she brings this period of British history to life in every aspect except the language.

I liked the mystery and I enjoyed the action sequences. The coldness and nastiness of the St. Cyr clan in general confused me a little, but I suspect that they have to be that way for series reasons. I was right that reading a book out of sequence means a measure of suspense was lost for me, and that is unavoidable.

The spoken language veers from quasi-Regency style to 20th century American, but Harris clearly has done her homework and shares a lot of interesting information about the period. I don’t understand why this series, which comprises, I think, ten books, isn’t a costume drama on BBC America or some Canadian studio. It has the political, personal and sexual complexity of TV dramas like Game of Thrones and Ripper Street, with the same degree of modern sensibility. These books would make the jump easily. If BBC America felt comfortable with a show as anachronistic as The Musketeers, the language glitches here should be no problem for them.

In What Angels Fear, a couple of copy-edit errors bounced me right out of the book. Yes, Harris should have caught both of these, but more importantly, her publisher should have. This is what copy-editors are for. The best one, early in the book, is a reference to, “St Stephens and St. Andrews, St Pancreas, and the Spitalfield’s church.” While the pancreas, an organ involved in the regulation of insulin the human body, is very important, it’s not saintly. This should be St. Pancras. (This is funny because of course confusing Pancras with Pancreas is a joke that has shown up in many other books.)

In the second case, Sebastian strikes a padlock with a heavy implement, and the padlock “sheers away.” This should be shear, as to break along a fault line. These tiny errors are jarring and Harris’s work deserves better editorial support.

Overall, though, I enjoyed both this book and the later one. These are good vacation or trip books; the characters are engaging, the mystery engrossing and there is quite a bit of adventure and derring-do. Sebastian’s rekindled romance with Kat is steamy and sweet. You will learn some things about Britain in the period shortly after it lost the American colonies, and during its long war with France.