Jenny Who; A Time Lord without a TARDIS

Like many Doctor Who fans I periodically grouse about the absence of female time lords. I don’t have any need to see the Doctor morph into a woman during one of his regenerations, but I would enjoy some stories about time lords who are women. Fortunately, in the New Who-verse, there are several already available, created in-world, as they say. I’m not talking about Missy/the Master, who is great, but has her/his own deal. I’m talking about other characters created in the show. I’m going to devote a few posts to ideas for women time lords, straight out of New Who. 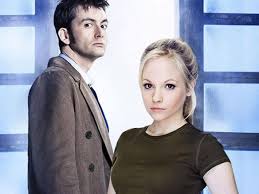 Jenny Who; the Doctor’s Daughter

In Season Four in an episode called “The Doctor’s Daughter,” the military humans in a subterranean complex forced the Tenth Doctor, played by David Tennant, to provide DNA so they could clone him. (It’s a long story.) The army humans tweaked a couple of chromosomes and created a young female clone of the Doctor, basically, a Gallifreyan teenaged girl. The Doctor repudiated her,  calling her a generated anomaly. He also said she would be unable to regenerate, but one thing we know about the Doctor is that the Doctor lies.

Donna Noble named the young woman Jenny. As the story progressed and peace was on the verge of breaking out, Jenny sacrificed herself to save the Doctor from an angry general who didn’t want to give up war. Jenny died. Everyone was sad and then they flew off in the TARDIS, but of course Jenny wasn’t dead. She came back to life (it wasn’t a regeneration; it seems more likely that only one of her hearts was damaged), stole a ship and went off to explore the universe.

While the Doctor’s initial negative reaction to Jenny might have looked like squeamishness with a touch of bigtory about cloning, the truth comes out later in the episode; Jenny is a solder, reminding the Doctor of his time as one himself, and what he did as the War Doctor (which we didn’t even know when this story aired). For this reason, he says, the Doctor refuses to consider bringing Jenny on board the TARDIS and taking her with them. In retrospect, it seems as likely that the Doctor is frightened by the possibility of giving this clone of himself access to a TARDIS, or at least, his TARDIS.

I’m not completely familiar with Doctor Who lore, and even for people who are, the stories are slippery and they change. In original Who, the Doctor was said to come from a “race of time lords,” but there are billions of Gallifreyans (over two billion children alone on Gallifrey when it was destroyed, we are told in “Day of the Doctor”), and they don’t seem to all be time lords. In “Listen,” the Doctor as a boy is sleeping in a barn, and the adults who are discussing him sound like Cockney farmers. Jenny is one hundred percent Gallifreyan, but she may not be a time lord yet. She doesn’t have a sonic screwdriver, and she doesn’t have a TARDIS.

Jenny is a soldier, so she wouldn’t necessarily build herself a screwdriver. On the other hand, the doctor didn’t build himself a sonic scalpel. I think Jenny’s experience would nudge her toward something more weapon-like; an augmented gun, knife or sword. It is a totally ridiculous weapon, but I would love it if she carried a sword. 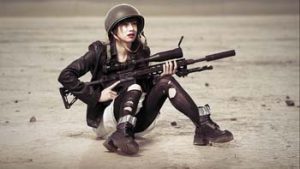 Jenny’s deficit as a person, and the thing that makes her interesting as a character, is that she has no history, no childhood. When she stepped in front of the Doctor to take a bullet for him, died, came back to life and stole a space ship, she was two days old. If she has memories beyond those of the battles she fought in her brief early life, they would be the Doctor’s memories, which would be confusing. Is Jenny curious about family life? Does she gravitate to families, in between assignments? Does she join an army, because that’s the life she knows? I hope she doesn’t. I want her to be not a mercenary but a paladin, traveling from planet to planet to help the powerless in the mode of The Seven Samurai, Shane or Jack Reacher in the Reacher books. What does Jenny think about wars between families? Does she take that for granted? Does it baffle her? Does it form her core understanding of the family dynamic?

However brilliant, intuitive and strong Jenny is, she won’t really be a time lord until she has a TARDIS. Okay, so let’s get her one! 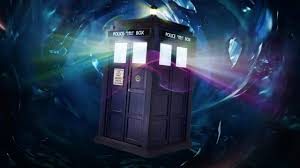 What does Jenny want? A TARDIS!

TARDISes are built — or grown– on Gallifrey, and if they are not sentient, they are at least semi-sentient. If we believe what the Doctor’s TARDIS tells him in the episode called “The Doctor’s Wife” (and I do), she chose him as much as he chose her, or at least that is the way she remembers it.

All the TARDISes were destroyed in the Time War, either that or they are trapped in the time-bubble where Gallifrey is hiding. Like anything in the Who-verse, they are gone, until they aren’t. Maybe something is calling to Jenny. Maybe she’s having strange dreams. Maybe it’s like a voice she can barely hear, speaking words she doesn’t understand but thinks she knows. Maybe something pinches just below her solar plexus, tugging at her. Maybe military-tactical Jenny interprets this as a signal. She follows the signal because she is curious. And somewhere, maybe on a deserted planet… maybe one that was the site of a cataclysmic battle, in a narrow chasm carved deep into rock, she finds a ship unlike any she’s seen before.

It would be easy for Jenny if the TARDIS that calls her is experienced, seasoned and battle-hardened, becoming her mentor. It might be more interesting, though, if the TARDIS that finds Jenny is young, untried — a teenager. A lonely, rebellious teenager. This would not, exactly, be a case of two teenagers, because Jenny has no childhood. But it would put two inexperienced, powerful beings out in the universe. They would screw up, and that would make things interesting.

Jenny’s TARDIS probably won’t have quite the features that the Doctor’s does. There might not be a swimming pool, the vast wardrobe of period clothing, and an organo-techno carousel in the living room, but it would express her. Would it be more like a tank or a battleship? Or a war room? Or something surprising?

I doubt BBC has any interest in spinning off this character. They have their hands full with Coal Hill, a show with military trappings would expensive… and Jenny is a minor character. This is where fiction, or fanfic at least, comes in. I would love to read stories of Jenny. I only found one fanfic story online at wattpad. I’d like to read more.

This entry was posted in Movies and tagged Doctor Who, female time lords, Jenny, TARDIS, Time Lords. Bookmark the permalink.

One Response to Jenny Who; A Time Lord without a TARDIS