The Expanse Season Two; A Stellar Preimiere–or is it Extra-Stellar?

The Expanse opened Season Two last Wednesday night with a double episode that ran for one hour, forty- five minutes with limited commercial breaks. I confess that I was fretting, the same way I fretted over the opening of The Magicians; that having offered up a brilliant first season, The Expanse would stumble.

Season Two gets off to a faster start because the world/universe building is already done. We returning viewers know who Belters are, why Miller would say something like, “Leave off the agua,” and why Mars and Earth are rattling sabers, rifles and really big space ships with lots of weapons. In the opener, “Safe,” we are off the a blistering start, as there is an attempt on Avasarala’s life on Earth, Amos plays with fire – or worse—when he opens a sealed container, and we meet –finally!—Martian Marine Bobbie Draper.

Here’s what to love: 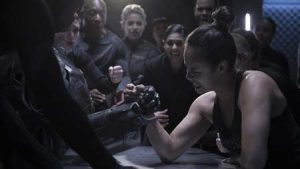 The first fear many of us had was that they would cast some petite blond woman to play Martian-Samoan Bobbie W. Draper. That fear was laid to rest last year when they announced that Frankie Adams would play the part, and she is perfect. She is tall and strong but vulnerability shows through the mask of her atmosphere suit.  Bobbie is a Marine and a patriot. Bobbie dreams of a terraformed Mars with an atmosphere, water and green plants; with Martian resources 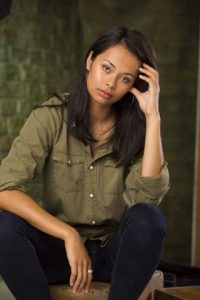 Here’s what she looks like out of make up.

diverted to an escalating arms race and the two planets balancing on the war/no war tightrope, that interplanetary Cold War holds Bobbie’s dream hostage. She resents that, and we’re going to see the results of that resentment.

Miller and Holden are Haunted.

Holden, the idealistic can’t-we-all-just-get-along captain of Rocinante, and Miller, the disgraced Ceres detective, are both facing psychological as well as physical after effects of their experiences on Eros. Holden can’t stop thinking about the hundreds of people there, who the cynical corporate scientists turned into mounds of crystalline blue resin, “for scientific purposes.” 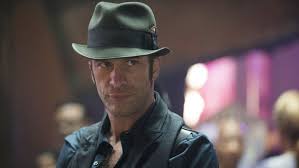 Miller is haunted by Julie Mao. He explains to Naomi; “She was dead before I found her, but sometimes I see her. Standing right there.” Miller, a venial, cynical man, found a cause in Julie Mao, and he is the most likely to be the character who will charge a windmill armed with only a lance. I don’t know how closely the series is going to follow the books (it seems pretty close right now), but Julie is calling Miller to join her. And he’s about ready to accept her invitation.

Crisjen Avasarala, the UN Secretary, has seen the faces of the men behind the curtain, those orchestrating a shooting war between Mars and Earth. She has no proof though, and she doesn’t know what they are hiding. Avasarala launches her own covert investigation, but even now she doesn’t know quite how close the enemy is. 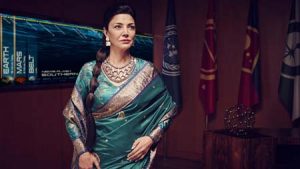 I am pleased to see Avasarala being given a bit more of a potty-mouth this season (even if it is mostly bleeped). The character in the book is described as a kindly, grandmotherly looking woman who munches pistachio nuts and uses incredibly foul language. Aghdashloo, who owns this role, has made the as character regal and sleek as a great white shark. Nice to hear her cursing a bit more, it adds a bit of salt to the dish.

The Proto Molecule is as Scary as We Remembered: 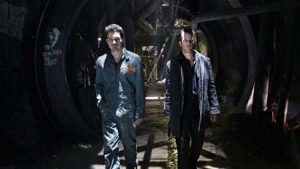 When Fred Johnson and Rocinante take over the shadow station, one of the scientists they capture babbles out something about the proto-molecule. It is extra-solar; it is a weapon; it was aimed at Earth. That’s right, someone from another system pointed this possibly-intelligent transmuting weapon right at us. We don’t know who and we don’t know when. The proto molecule brings a new, scary meaning to the word “colonize.”

This entry was posted in Movies and tagged SyFy, television, The Expanse. Bookmark the permalink.