How Many Pizza Places Does One Town Need?

In the building next to the Post Office, in front of the laundromat, in my home town, a pizza restaurant has gone in. It’s gone an unusual name: Hippizzazz. I think this is meant to be a mash-up of “Hippie,” “Pizza” and “Pizzazz.”Some ambitious naming there, guys. 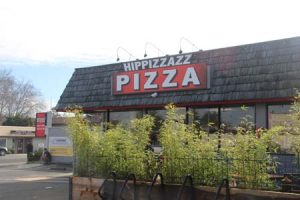 Just how do you pronounce that?

The converted storefront advertises pizza-stone cooked pizzas with locally sourced ingredients. Honestly, we are in a great region for locally sourced pizza ingredients for everything, just about, except the crust. You can get wonderful vegetables and herbs, good quality local meats, and excellent cheeses. And we grow some great tomatoes in the summer. Let’s please not get carried away, though. I don’t want to nosh on a kale-and-golden-beet pizza with a bone marrow reduction, or something.

My only question is — well, actually, I have a bunch of questions, starting with, “How do you pronounce that name?” But the important question is, “How many pizza places does a town of 7600* people need?” 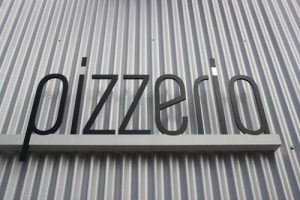 Pizzerias. We got ’em. 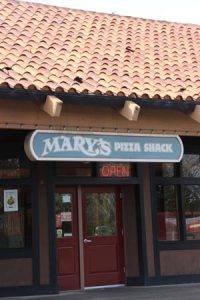 Let’s take a quick tour of the pizza establishments available to a visitor to Sebastopol. Starting at the north end of town is the empress of pizza; Mary’s Pizza Shack. I’m biased, but Mary’s is still my favorite pizza. This full-service restaurant has transcended its pizza-shack roots (it started in Boyes Hot Springs in 1959) to offer a full Italian menu– I would say Italian-ish menu. It is also a chain with nineteen sites scattered over northern California. Mary’s serves beer and wine, and some locations have full bars. The Sebastopol restaurant has table seating, carry out and delivery.

Due south of Mary’s in the Fiesta Market center, we have Mombo’s Pizza. The original Mombo’s was in Santa Rosa. This is a second location for them. They offer tasty east-coast-style thin-crust pizza. There are some picnic tables outside the storefront, and they do carry-out by the pie or by the slice. 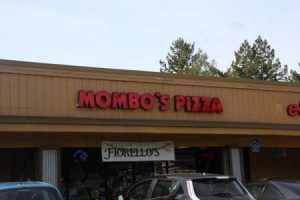 You can order online. I don’t think they deliver. Mombo’s is one tasty slice of pizza and I pick up a few slices on the weekend, once in a while, for a quick lunch. The interior has seating. Mombo’s ambience is utilitarian; tables offer a gorgeous view of the side of the reach-in refrigerator and a pinnacle of flattened pizza boxes. You can watch pies being made and baked from the counter. The menu also offers soup, meatballs and a couple of choices of sandwich. No frills, good food.

And they serve gelato. 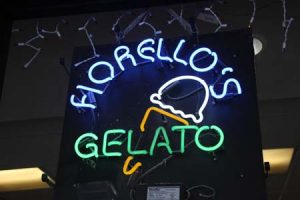 As you head down Highway 116 toward the center of town you will pass Papa Murphy’s Take and Bake on your right. Papa Murphy’s is a franchise; they offer assembled pizzas that you bake at home, or, if you’re like me, that you take to a potluck event and bake at someone else’s home. 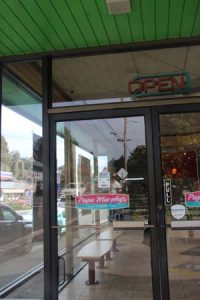 Papa Murphy’s Take and Bake, a staple of potlucks.

In the center of town, in the strip mall, er, shopping complex now anchored by Whole 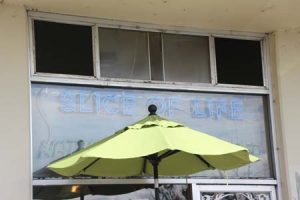 Foods, Slice of Life still survives. This vegetarian pizza joint/restaurant dates from 1974 and is still going strong with relatively new owners. The last time I had a slice of pizza there, I chose the whole wheat crust and it was delicious. This was not thin crust. The restaurant has expanded its menu but pizza is still a staple.

Vignette Pizza is in the Barlow, the town’s latest shopping and wine tasting complex. Oh, sorry, I have just been informed that the Barlow is a “food community.” I know nothing about Vignette beyond its name andthat 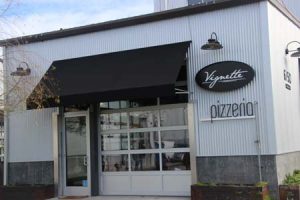 Vignette, in the Barlow

For many years the southern end of the first block of South Main Street held a Round Table Pizza. It was Round Table. It was just what you’d expect; dark, with dark vinyl booths, a long salad bar with thick, relish-laden Thousand Island dressing in a little vat closest to the front, and a familiar menu of pizzas. If Round Table ever served anything beside pizza, I never tried it.

According to Spouse, Round Table was the first “pizza joint” in town, opening in the early 1970s. Its original location was on Hwy 116 north, where here is now a sushi restaurant. I remember going there a few times. Spouse comments that the town legend about Round Table is that the first six months or so that it was open, it didn’t serve beer because a neighboring church (not the Mt Olive Lutheran Church, he hastens to add) argued before the city council against it, and the liquor license was delayed. 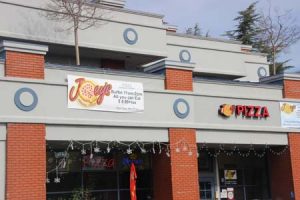 Several years ago, Round Table went away and a place called Terra Vino opened up in the Main Street location. It was dark, with dark vinyl booths, a long salad bar with a little vat of thick, relish-laden Thousand Island dressing closest to the front. In addition to pizza, Terra Vino also served “small plates,” like mac-and-cheese… and it also had a wine list.

Then Terra Vino went away and now Joey’s Pizza has opened in that location.

1 block south of Joey’s is Hippazzaz, which, I found out today, does not deliver but will do carry out. 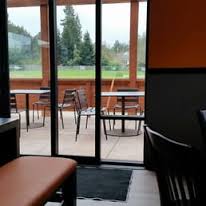 I cheated. This is a generic Round Table interior from the company’s website.

I assumed Round Table had closed, but it reopened in a tiny mall at the south end of town near the MacDonald’s, Ochoa’s and the Formosa Bistro.

If you are on Bodega Highway heading west out of town, and you turn on Pleasant Hill Road and pull into the 7-11 parking lot, you can pick up a carry-out pizza at Buddie’s Pizza, and they deliver. More than that I do not know.

My home town of 7600 people has nine primarily-pizza places. I didn’t count the fine-and-casual dining places that put mini-pizzas or flatbreads on their menus. This is roughly one pizza place for every 840 residents.  Of course pizza doesn’t work like that. I would say, though, that you can pretty much get any kind of pizza you want here. You can get an “artisanal” pizza, a thin-crust, fold-it-in-half-slice pizza, a 1980s-conventional pizza with four kinds of meat or a thick crust pizza. You can carry out a pizza, cook a pizza at home, or have a pizza come to your door.

Whatever else my little home town may lack, there is plenty of pizza. 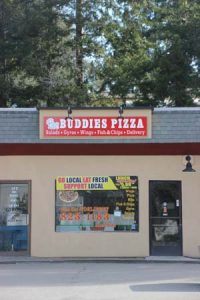 One Response to How Many Pizza Places Does One Town Need?