The Ospreys Themselves: Or, I Finished a Zero Draft! 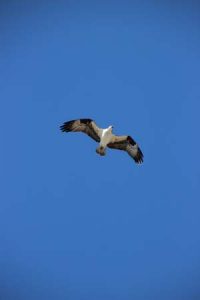 On Wednesday, March 22, I got to the final words of my fiction Work in Progress. I thought it was 108,569 words (and that’s what I tweeted). Later I remembered that I had dumped a bunch of story notes into the end of the document along with about three scenes that I pulled out of the manuscript but wanted to keep in case there was something useful in them. I have dumped all of that into a separate document and now my reliable word count is 107,711.

I was excited on Wednesday. I still am.

I have put it aside. I even wrote a note on the calendar for April 6; “Begin Revising,” and I’m not going to look at it before then. Already, though, I want to tinker.

It’s funny how that works. For more than three weeks I dodged the ending like it was a collection agency. I dinked around in the middle of the manuscript and wondered about whether “might” was correct, or “may.” (Okay, no, not really.) Was Tucker’s steampunk car burgundy or teal? It was teal; should it be burgundy? I wrote a bad breathtakingly-climactic ending, and trashed it. I wrote one paragraph toward a better breathtakingly-climatic ending. I backed away. I circled around. I gave myself another field trip to Mare Island, because, “I had to get that mapped out in my head so I could visualize the ending.” (Right.) Instead I took pictures of ospreys.*

And then I started writing something. I figured out a way to get what I needed even though it is not realistic (I hope it is plausible) by grounding the action in the main character’s physical experience. In other words, since it’s fantasy, and we are (I hope) experiencing the opening moments of the finale in her body and mind, readers will be willing to accept what’s going on around her, even though it’s half magical and half mundane and 100% wildly unlikely.

I have no idea how it all works out, really, because I haven’t reread it yet, and it’s a “discovery” draft. But I’m jazzed that it’s done.

After avoiding the thing for weeks, after dodging its calls and ignoring its texts (insert simile of your choice here) now that I’ve given myself a cooling-off period, my fingers itch to go in there and tinker. Not fix, mind you. Not revise. Not analyze whether the structure works, whether the plot pieces hinge together smoothly enough, whether the backstory and worldbuilding of the visitors is complete enough (it’s not). No. I just want to tinker. In the final chapter, I have a scene where my MC, Miranda, is sitting at a table with a group of the visitors. There is a visitor missing from the table. Miranda is sitting in that person’s chair. I didn’t make that clear. I really want to go in there and make that clear, even though, at this point in the process, it does not matter! (By the time I am closer to a final draft, that will, I hope, convey something important to readers, but not right now.) 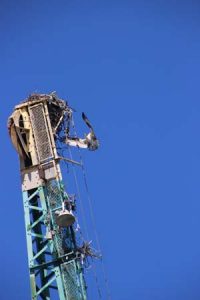 Osprey Flies toward next atop ship crane boom.

I want to change the beginning to turn one-and-a-half pages in transcript format into eight lines of transcript format. I want to do that right now. It’s like deciding to organize your sock drawer the night before the midterm that you haven’t studied for.

But I’m being strong. I’m writing this instead. Hey, I got to the ending, and it’s a real ending.

*And the osprey nest made it into the book. I should just go in right now an add the ospreys themselves…