Here are a few pictures I took during the month of March, 2017. I hope you enjoy them. 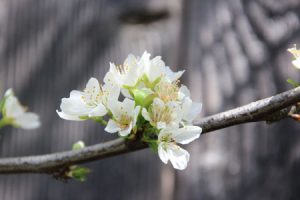 While I was on the walk where I took that photo I met an elderly man coming up from Apple Blossom Lane (play on words intended.) He was walking a little fluffy white dog and a bigger, shepherd mix who seemed a bit older. The fluffy one was effusive, but both dogs were friendly. He said the bigger, more reserved one was his dog and he had gotten her from New Orleans after Hurricane Katrina. “She doesn’t like water or loud noises,” he said. I said I thought that made sense. 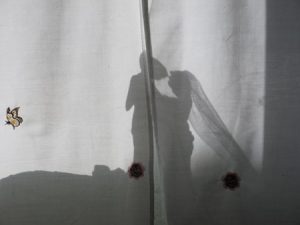 Several weeks after Dave and I got married, six years ago, we went to visit our friend Sharon in Murphys. Sharon and friend Denise prepared a, well, let’s call it a reception. They decorated the house, and Sharon made a huge batch of her famous cinnamon rolls, which she stacked like a cake. Then she and Denise went searching for the tackiest cake-topper they could find for the top. Seriously, that was the criterion. You can’t fully appreciate it here; the couple looks circa 1983. I have faithfully kept the cake topper. One morning, walking down the hall, I saw how they looked through the curtain, so I went and got my camera. 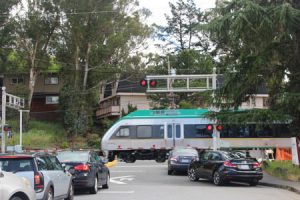 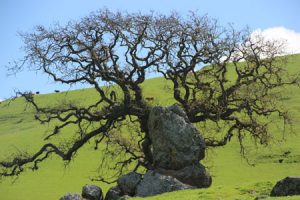 I think this oak tree and rock could be a troll face, or a portal to the underworld, or maybe just another world generally speaking. You can find this on D Street, outside of town, heading west toward San Antonio Road.

This entry was posted in Photo album. Bookmark the permalink.