Fantastical Beasts and Where to Find Them; A Long DOCTOR WHO Episode Without the Charm

The other night I rented Fantastic Beasts and Where to Find Them. It’s about two-and-a-quarter-hours long. This is a prequel to the Harry Potter series and takes place in North America (New York City) with a young Hogwarts-dropout wizard named Newt Scamander. Scamander comes to New York with a suitcase that contains a pocket universe filled with rascally fantastical creatures. One escapes, and our story begins.

For at least the first hour I was only bored. Then I was bored and confused, but the primary tone of the experience was boredom.

Boredom. This is a huge CGI extravaganza, set in the Harry Potter universe! How could I be bored? No, seriously, I want to know. 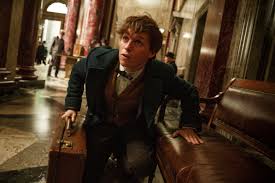 First of all, the computer-generated beasts were wonderful (all but one of them). Several of them were just cute as the dickens.They didn’t help enough. Throughout the movie, I had to say to myself, “This is not Doctor Who, and that is not Matt Smith” because Eddie Redmayne gave off a definite Doctor Who vibe (complete with bowtie) and the film was like a long Doctor Who episode with really nice production values. In case it wasn’t enough like Doctor Who, Eddie Redmayne’s – I mean Scamander’s –suitcase is bigger on the inside. I can’t be the only person who noticed that.

But, basically, there’s no story for a long time, and when there is a story, it has no real heart, and tries to distract us from that with great 3D special effects, beautiful costumes and… cute critters.

Scamander’s suitcase gets swapped with the sample case of  Jacob, a “nomaj” (a mundane, the USA version of “muggle”). Jacob’s case is filled with tasty pastries because he is trying to get a loan to start a bakery. He’s a really nice guy. Scamander is lectured by a stern young magical woman named Tina who was an auror, but has now been demoted for reasons not explained (perhaps hinted at), and dragged into the bureaucratic offices of MACUSA, MAgical Congress of the USA. They have to let him go when his case only contains pastries, while back at Nomaj Jacob’s humble flat, critters are boiling out of suitcase and running amok. There’s another creature, though, that’s already been in New York knocking over walls and tearing up the streets, and it’s bad. Very bad. And a auror named Graves is looking for it.

Then there’s a bigoted anti-magic woman who believes witches and magic are evil. She has a bunch of adopted kids and she is a brutal abuser. Scamander diagnoses the destructive creature as a Big Swoopy Evil that happens when magically gifted children suppress their gift. (Guess where the host of the evil thing might be! Just guess!) Also, Grindlewald, the dark wizard, is hiding somewhere in New York, in disguise. (Guess where he is! Just

I’m Frank the Thunderbird. Why don’t I have my own movie?

guess!) Scamander doesn’t care about any of this, he just wants his pets back, and he’s a pretty unlikeable guy, even when he is channeling Doctor Who, until we meet the thunderbird he is keeping. He has come to America to return it to Arizona, where it lived until it was captured and sold in Cairo, where he stole—rescued—it. I liked Newt for five or six minutes there. And I really liked Frank the Thunderbird. If they gave Frank his own movie, I’d go see it in a theater.

When I wasn’t telling myself, “This is not Doctor Who,” I had time to notice that Eddie Redmayne has great cheekbones and nice eyes and I could see why they cast him in The Danish Girl. I also had time to notice when they changed Tina’s hair so she went from looking mousy to pretty, and to wonder why Queenie, Tina’s mind-reading sister, has a Bronx accent when Tina does not. I also noticed what beautiful costumes they had, and to wonder why the magical community needed a speakeasy, since illusions are their big thing and hiding booze during Prohibition would be, like, nothing for them. I was having some trouble staying on track.

I like shiny things, and I’m here to distract you from the fact that this movie has no story.

You can’t blame me completely. It would be hard to imagine a performance that was more flat-affect than Redmayne’s. The character seems to have no emotional center. He doesn’t seem to really care about the hapless mundane he’s dragged into the middle of his mess. He does seems to care about the creatures, at first, but, when he needs information vitally to track down one final animal, he hesitates for about a second before trading one of the other creatures, Picket, into slavery. This might be the right moral decision actually; but there is no pause, no emotional beat behind it. Then the guy he sold Picket to double-crosses him, and in the confusion Newt snatches back Picket. When he and Picket are arguing later, I am sure I heard Newt say, “I never would have sold you,” so either he’s a liar, or he’s not a liar and he would sell a friend to save hundreds of lives. I think a real story would have made me care about which of those he was.

Sometime later, a whole bunch of magical and mundane people converge on the subway to face the Big Swoopy Evil and the child who houses it. Newt is successfully talking to the child, while Tina is trading wand-shots with the bad wizard who is really Grindlewald, when a bunch of magicals show up and kill the Big Swoopy Evil and by extension the child. There is a pause, while everyone stops to think about what this means and – haha! Just kidding! No pause. Moving on.

Then there’s a raft of plot-housekeeping scenes and some time several minutes after that the story ends on a note that makes it seem like Newt Scamander will be coming back to New York to hang out with Tina. Four more films in this “series” are projected.

The movie didn’t seem to know its audience in the most basic of ways, even age-range. The first hour is filled with sight-gag after sight-gag as Scamander chases his mischievous critters; a predictable, Doctor-Whoish scene in Central Park that is funny, a couple of fat jokes at the expense of Jacob. Then we have child abuse, emotional torture, enslavement, an attempted execution with no due process, and then a bunch of wizards blow up a child. It felt like that age demo should have taken a huge leap there.

So, I don’t know. The movie won an Academy Award for best costuming, so… that’s good. And I did stay awake all the way through, so there must have been something. Maybe I was just waiting for the familiar sound of the TARDIS to carry me away.