I’ve been seduced by AMCs Into the Badlands. AMC is developing a rep for creating well-produced, interesting original programming, like Breaking Bad and The Walking Dead. Into the Badlands is closer to the latter in category, being post-apocalyptic fantasy. Instead of the gritty hyper-realism of Walking Dead, Into the Badlands gives us highly stylized scenes with an Asian flavor. Its creators wanted to make a martial arts show, and they’ve succeeded. It focuses on beautiful sets and costumes and exquisite martial arts battles. It has a video-game premise for world-building.

After watching the first three episodes On Demand, I thought the show must be literally based on a video game, but that’s not the case. Producer Daniel Wu (who also plays the lead) has said that the story is inspired by a sixteenth century Chinese novel called Journey to the West. 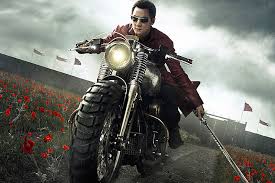 It’s the end of the world as we know it and I feel fine — Sonny and motorbike.

In an after-the-collapse feudal world, Wu plays Sonny, the “regent” or second-in-command to one of the seven barons in the Badlands. Regents are like heads of security. In this world, where people got rid of guns for no reason whatsoever but still have fossil fuels, cars and really cool motorcycles, Sonny fights with swords, knives, throwing stars and his own body, tattooing a hashmark on his body for every person he kills. Sonny’s got a lot of tattoos. In his travels protecting the barony of his baron, Quinn, he finds a teenaged boy named MK being hauled off by nomads. Sonny frees him and soon discovers that MK has a sizable bounty on his head and a killing power that he can’t control. He also has a medallion with an image of a city skyline on it. Sonny has an artifact with the same image, and later we see it on a book.

(Back to world-building, or the lack of it, for a moment. All of the characters seem to know that the spires on the image depict the skyline of a city, even though none of them have ever seen a city. Into the Badlands is certainly not concerned with that kind of detail.)

Quinn raises opium and the walls in front of his fort glow with crimson poppies. Why opium? Why not? Where does he sell it? I don’t know. What’s the currency? Who knows? World-building is not deep here. Our first clue is the voice over narrative in the first three minutes of the show, where Sonny tells us that the world gave up guns. Yeah. Right.

What’s so great about Into the Badlands, then? Well, a few things: 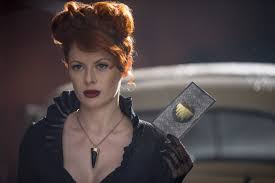 Demure in not in my nature– The Widow

I over-use the phrase “visual feast” but this show is one. The artistic sensibility is vivid and lush, whether it’s the livery of the various barons; crimson for Quinn, royal blue for the rebel baron The Widow. Quinn’s colors are mirrored in sweeping aerial shots of those red Asiatic poppies, and now we know why he grows them. There are scenes of lush green meadows and moody forests (the first season was filmed in Louisiana). Somebody had a good time deciding what items from “our” world would survive; the cars all look like they’re from 1947, lovingly restored; there is a gramophone and a pocket watch. Even the sigils of the barons, like Quinn’s nautilus-shell-inspired armadillo, are beautiful. The costumes of the “court” women gleam because they are satin or velvet. Style is a big, big deal and to some extent is used to define character; Tilda the regent of the Widow, sports a high-fashion outfit with a nipped in waist, all in royal blue, while Sonny wears a “utilitarian” crimson vest that not coincidentally shows off his upper arms. The use of restored antebellum houses in Louisiana add a second layer of not-quite-realist beauty.

I’m not a martial arts person, but the choreography of these scenes captures my attention every episode. Every episode has at least two battles. At least one is a melee, often many-against-one;  at least one is a duel. There are frequently lesser scenes which purport to be training and are really used to provide expositional dialogue; but the set pieces are stunning. It would be a drawback that the story is written around two fight scenes per episode if this weren’t a martial arts show. This is an unfair comparison, but Daredevil had at least one fight scene per episode; usually Matt getting beaten, and they were usually harsh and slow. Fight scenes in Into the Badlands are poetic, elegant and fast (and violent). 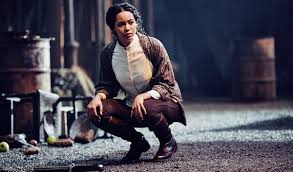 I have a very bad feeling about this–Veil

Really? Yes. Before Sonny got sold into slavery by the River King –long story – he had reached a moral crossroads and was preparing to leave the Baron’s service, which is impossible to do. He was driven by concern for his lover, Veil, and their unborn child.

Quinn worked his way up to the role of Baron; he is strategic and ruthless. Now he fears he is dying and that fear is driving his decisions. He is not a sadist but he cares nothing for the lives of others, and he is conscious tornado.

The Widow also fought her way to where she is. The other six Barons distrust her and try to delegitimize her title – by calling her “The Widow.” She espouses egalitarian views that are not popular with the ruling body, and wants more freedom for women. For the Widow, you only find freedom with a sword. The Widow has an interesting past that gives her insight into MK’s situation and his killing power; and she knows something about the image of the city. I like her and I want her to prevail even if I don’t completely believe all the stuff she tells her “daughters.”

Veil is a “cog” (the lower caste in this system, basically everyone except the barons and their trained killers who are called “clippers”) and a doctor. She is Sonny’s lover. She is a healer. She is smart. She also makes metal prosthetics for the soldiers who have lost limbs – and there are a lot of those. She is tough, and she figured out a while ago that she cannot count on Sonny for protection. Veil is by far my favorite character, and the stakes are raised for her in Season Two, when she is the “guest” of the deposed Quinn, dependent upon him for her son’s life while she takes slow-motion revenge against him because he killed her parents. You go, Veil. But please, be careful.

Some characters do fail, and badly. In Season Two, MK and his story have become unintentional tranquilizers. At the end of Season One, he was abducted by monks in a pickup truck and taken to a secret monastery. Sadly, the most interesting thing about that part was the monks with a pickup truck. Now MK does sword poses in front a waterfall and battles himself on the astral plane. (Yawn.) The monastery reminds us, again, that this show cares nothing for world-building, substituting flowing robes, lots of candles and tea services for a belief system. We do know that the pickup-truck monks find and scoop up the kids who have MK’s deadly power. We know they have a room with a lot of mirrors to reflect the candles. We don’t know what they believe. The sooner MK puts the monastery in his rearview and reconnects with Sonny the better.

Ryder, Quinn’s son and self-styled new baron, has great potential. Both his mother, Lydia, and his wife, Jade are strong, strategic, manipulative women; Jade is in the ascendancy and Lydia is in a downward spiral that has the potential to make her desperate and dangerous. I have high hopes for Lydia. 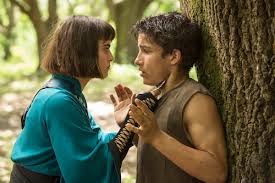 We must stop meeting like this — Tilda and MK

I’ve discussed one of the show’s weaknesses for me, and that’s world-building. I don’t know if it’s a weakness if the creators don’t care. I mean, I don’t fault Say Yes to the Dress because there aren’t enough gymnastics in it. When Into the Badlands has an adversary of Sonny’s walk out of the shadows and pose before a backlit tunnel, thus throwing him, with his long duster, his knee-high boots, his swords and his big old hood into silhouette, then flips back the hood so the backlighting can skate off his shaved scalp, you know you are watching a show that cares about image. And, honestly, it delivers those images.

For me, another drawback to the show –again, probably not a weakness – is how gory it is. Really, those vivid colors? One of them is red, flung in loops, whorls and spatters from the fight scenes, or, well, just because. In an episode in Season Two, we watch blood drip from the severed neck of a dead stag Quinn rattles on giving some speech for, like, forever.

Season Two has pulled back the fictional camera to show us scraps of our world, but I think (I hope) their instinct is not to provide some long explanation for How We Got Here – but to stay grounded in the here-and-how of the post-apocalyptic feudal world. If the showrunners are drawing from Journey to the West, then a character they added at the end of Season One might represent the Monkey King. And if the Monkey King shows up, then things are going to get even more interesting.

This entry was posted in Movies and tagged AMC, color, Daniel Wu, fantasy, gore, Into the Badlands, martial arts. Bookmark the permalink.